“I did the thing one should not do, and anthropomorphized them, but only until I understood that it was a rare human being who displayed the brand of determination, which we call ‘heart,’ common to the thoroughbred. At the age of eight, therefore, I had already decided it was much wiser to judge people as if they were horses, than to evaluate horses as if they were people.”— Jean Carroll Nolan 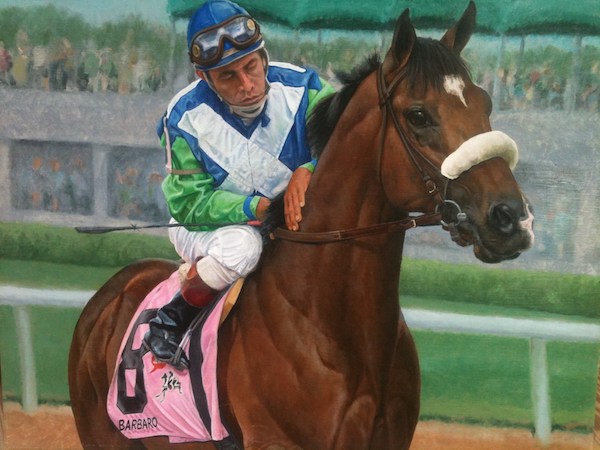 Note: This column was first published in Weekly Hubris in November 2017.

SEASIDE California—(Weekly Hubris)—February 2020—Horse racing is an odd sport, comprising in equal parts hard-headed business decisions, abuse and coddling of the four-legged principals, and glorious, epic performances that generate passionate love. I once wrote about the horses who can’t run well, who do not win often enough to, in the eyes of their connections, justify the cost of keeping them, and are therefore sent to slaughter. It is an ugly and horrible business, when viewed through that lens. I know full well that the majority of thoroughbreds do not win, are not legendary, do not garner admiration far and wide, and come to a variety of ends, based on the inclinations of their owners and on sheer luck. A few go to retirement facilities, some retrain as riding horses, some compete in eventing, (steeplechase, dressage, horse shows), some, as previously noted, go to a slaughterhouse, to end up as dinner in Japan or Belgium, or as pet food. It is a crap shoot and, since I am a lover of beasties, I am deeply disturbed by the fate I know awaits many of the athletes on any given track on any given day. 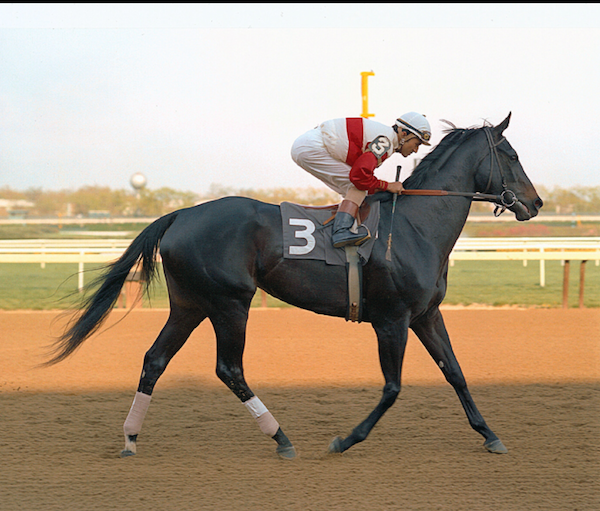 Ruffian, winner of every race in which she ran except the last, when she was injured, and had to be euthanized.

If you want to see a passionate race fan weep, say the name, “Ruffian.” Ruffian, the remarkable filly who won every race in which she competed until the fateful last run, and in fact never trailed at the quarter pole, broke down in a match race with Foolish Pleasure, the Kentucky Derby winner of that year (1975), and had to be euthanized. She was enormous, (17 hands, with a deep chest and huge haunches), a bay so dark she looked black, and exquisitely elegant standing still or running. An absolute beauty, with an attitude to match. My husband and I were watching the race with my brother and sister-in-law, and my brother, usually the most reserved of reserved Northern European males, sobbed like a child. So did I.

My first very favorite horse of all time (there have been several), was a colt named Tim Tam who, in 1958, came within a broken sesamoid of winning the Triple Crown. He had taken the Kentucky Derby by a half length, and the Preakness by a length and a half. In the Belmont, he was leading at the quarter pole, if I recall correctly almost 60 years later, when he fractured the sesamoid in his right fore and, despite demonstrating incredible courage, and running the rest of the race on the shattered bone, finished second to a fine little colt named Cavan. Unlike the damage suffered by Ruffian, Tim Tam’s injury proved treatable and, while he never raced again, Calumet Stables, his owner, took excellent care of him. He recovered, had a successful stud career, producing 14 black type winners, and dying of natural causes in 1982. The two stories have different ends, but perfectly represent the dangers and glory of racing. 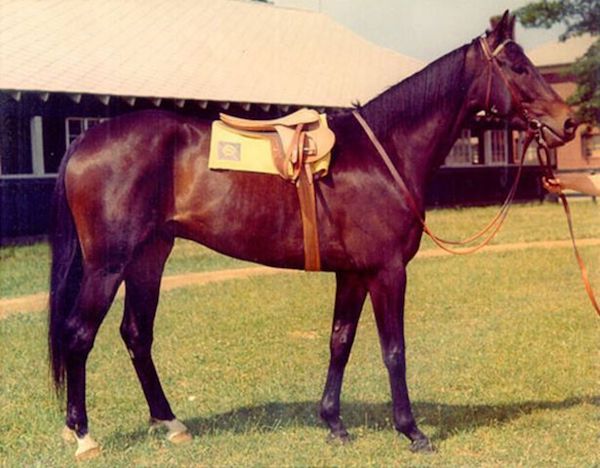 Tim Tam, winner of the 1958 Kentucky Derby and Preakness.

I fell in love with Tim Tam when I was a girl of eight, and with Ruffian at 25. I owe this unhealthy and heartbreaking addiction to my parents, who—and I am being literal here—told me stories of famous thoroughbreds when they tucked me in at night. I cried when the tale included death or injury, but the absolute glory of their wins, their courage, their beauty transported me. I did the thing one should not do, and anthropomorphized them, but only until I understood that it was a rare human being who displayed the brand of determination, which we call “heart,” common to the thoroughbred. At the age of eight, therefore, I had already decided it was much wiser to judge people as if they were horses, than to evaluate horses as if they were people.

In 2006, Barbaro won the Kentucky Derby by a strong six and a half lengths, stalking the pace in fourth and fifth place for the first part of the race, and then splitting horses and exploding at the top of the turn to pull away all down the straightaway in front of the stands. He had not gone off as the favorite, but the performance, which one announcer described as “sublime,” compelled the admiration of the crowd and of race fans throughout the country. He was a lovely colt, bright bay, with a clipped mane and a long tail and a sculptured Arab head. He ran with his head up, one ear flicked back to hear his jockey, the other pertly erect, only rarely pinning both ears, when under great pressure. He was beautiful, strong, kind and apparently invincible, coming into the Derby undefeated, and so, logically, he was pointed toward the Preakness Stakes, at Pimlico, two weeks later.

The picture of him being led to the track at Pimlico is among the most gorgeous things I have ever seen. He is full of himself, and delightful in his justified arrogance, and the wraps on all his legs serve to set off his rich coloring and lengthy stride. And then, the Preakness itself, which seared my heart, and those of a legion of fans. He had a false start, which had never happened to him before, was examined by a vet, and found to be sound, and went back into the starting gate. When he broke from it a few moments later, the crowd roared. He had gone only a few hundred yards when, suddenly, hideously, obviously, he broke down, shattering his right rear leg. He tried, repeatedly, to test the limb, to see if it would bear weight, all the while his jockey, the admirable Edgar Prado, stood beside him, literally holding him up, and preventing the horse from doing further damage. I remember feeling sick. 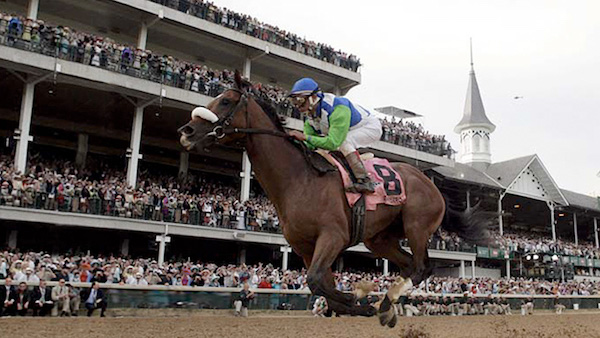 Barbaro, 2006 Kentucky Derby winner, closing on the finish line in the Derby.

His owners, Roy and Gretchen Jackson, did all one could ask, transporting him to the University of Pennsylvania’s New Bolton Center, the Mayo Clinic of the horse world, and visiting him daily throughout his valiant, eight-month struggle to survive. It should be noted here that it would have been far more profitable for the Jacksons to collect insurance on the horse rather than attempt to save him, a lengthy and very expensive undertaking. Surgeons tried everything already in the book, as well as developing new therapies during his stay. He demonstrated, consistently, cooperative intelligence in his treatment, a hearty appetite, kindness and even, stealing caps, a sense of humor. An entire online entourage, the Friends of Barbaro, followed his progress through a horse racing site run by an exercise rider, Alex Brown, and I was among them. His attitude and appetite remained excellent, even when he developed laminitis, the disease that has taken many great race horses from us.

Despite repeated surgeries, he eventually found himself, as Dr. Richardson, his estimable vet said, literally without a leg to stand on. On January 29, 2007, for the very first time, he lost appetite, and his owners, conferring with Dr. Richardson, made the agonizing choice to euthanize him.

When I am devastated by life events, as I was by this death of a horse I never even saw in person, the imposition of order on a chaotic emotional state is the first step in healing. The poem below was written for Barbaro shortly after his death, in February of 2007. It encapsulates, in my mind, the absolute glory of the thoroughbred running horse, and explains why, despite knowing that there is a dark underbelly in racing, I cannot resist it.

A statue of Barbaro, in full stride, was erected at Churchill Downs, in 2009. 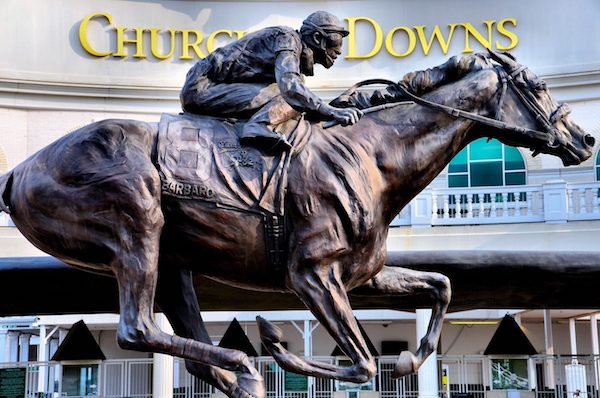 What are the qualities that call the soul?
What alchemy can make the spirit rise
From the darkened center where it lies
Insulate at the heart of the complex whole?

Dance, mathematics, music, sunlit days
All have their magic. So, too, beauty sings
To complicated and concentric rings
Nestled within the brain. And courage preys

On us. An epic character appeals
To deepest instincts, forces us to gaze
Upon the hero, as his deeds amaze,
And , awestruck, wonder what it is he feels.

Tart self-assurance, undazzled by any glare,
Lends us its balance. We draw from a great bank
Of Promethean vision. Silently we thank
Those who make real what we wish we could dare.

So one bay horse, mane cropped and nostrils flared
Like a Greek warhorse, frozen in a frieze,
Is likewise frozen in our minds. A breeze
Freshened with roses reminds us how we shared

His glory, how he never grudged our glee
In all his soaring victories, how he gave
All he could give, how he continued brave
Through trials that only a grim fate could foresee.

He showed us patience, humor in fields of fire,
Grace under pressure in every condition,
Winning and injured, handled each transition
With sure aplomb to which we but aspire.

Still, what I shall recall, as I look back
On his storied and caparisoned career
Is neither sorrow, nor the human fear
Which scoured my heart, staining blue skies black.

I shall instead direct my inner eye
To see the moment he taught us all to fly,
Defying physics, seeming to scorn the ground,
Turning for home at Churchill, alone, unbound.