Why This Old Broad Loves Baseball (& Her Father-in-Law)

“Only Savage could go after baseball, for Chissakes. Baseball! OK, this is a man who called Supreme Court Justice Sotomayor ‘a stone-hearted racist and a narcissist’—you’ve got to give the guy high marks for hyperbole—but slam baseball? In THIS economy? In THESE times, when anything so thoroughly red-white-and-blue and smelling of apple pie (with a side of steroids, alas) should serve to buck up our spirits? Call the national pastime puerile, past-its-shelf-date, boring, even (as he suggests to interviewer Kelefa Sanneh) vaguely ‘Cuban,’ ‘Communist’?” Elizabeth Boleman-Herring 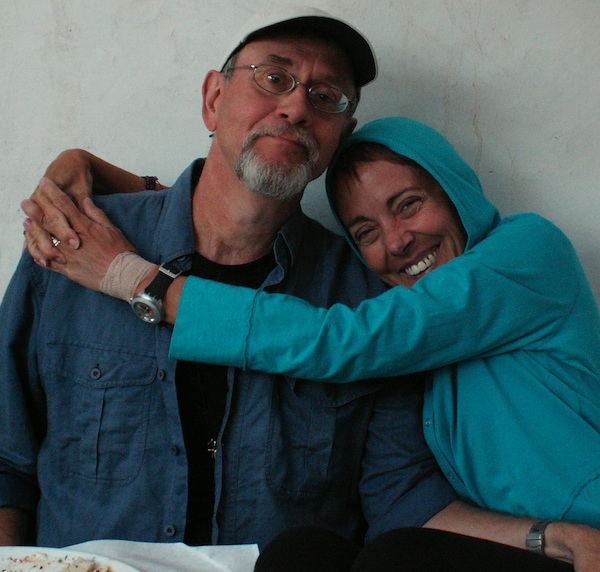 Clyde’s eldest, Dean, and his spouse, the author: Mets fans.

TEANECK New Jersey—(Weekly Hubris)—6/25/2012—There, nestled amongst the pages of my beloved New Yorker magazine was Michael Savage (like a cockroach in my crème brûlée) saying: “I still can’t believe that in this day and age an adult would go to a baseball game.

Ahhh, Michael Savage, of “The Savage Nation,” purveyor of reactionary, chrome-yellow-journalism. Only Savage could go after baseball, for Chissakes. Baseball! OK, this is a man who called Supreme Court Justice Sotomayor “a stone-hearted racist and a narcissist”—you’ve got to give the guy high marks for hyperbole—but slam baseball? In THIS economy? In THESE times, when anything so thoroughly red-white-and-blue and smelling of apple pie (with a side of steroids, alas) should serve to buck up our spirits? Call the national pastime puerile, past-its-shelf-date, boring, even (as he suggests to interviewer Kelefa Sanneh) vaguely “Cuban,” “Communist”?

Well up with THIS, Sir, to channel Keith Olbermann as interpreted by Ben Affleck, I will not put!

I LOVE baseball . . . with the fanatical love of a late-late convert.

I came to my passion for the game, as I came to my last (really) marriage, late in life. I almost missed the ball, as it were; the game; the seat on America’s big Zazen cushion. For, make no mistake about it, as cricket is to the English, born and bred as well as naturalized, baseball is to Americans, even if their first language will ALWAYS be Spanish.

Baseball, for all we know, may be the key to the universe; The Great Universal Question (for which the answer will always be “42”: see A Hitchhiker’s Guide to the Galaxy; the only cosmic and un-patentable glue able to hold this great nation together. “Savage Nation”? You can have it. I’ll take my Mets.

I’ll take David Wright’s Gary-Cooper-countenance and players from hither and yon with increasingly inscrutable names; the hawking and spitting and gum-wad-chewing guy-ness of this interminable game; even the cup-adjusting; the taped riffs of organ music (whyEVER the theme from “Zorba, The Greek,” just for example?); the baroque and nonsensical and evocative and poetic language (“Cheddar cheese in his wheel house,” “A little bit of chin music,” “Showing bunt.” “Going yard.”).

When Obama’s up to the top of his waders in Bush’s leftover pig-s&%t, we’re at war, seemingly forever, in Pakghanisraq, and we here in Teaneck don’t even have the $$$ to trade in our clunker DESPITE the 0-financing . . . well, I’ll take baseball, on the sofa; on the car radio; as background music for an afternoon nap in a room we can’t afford to air-condition, the lazy ceiling fan revolving over us in hypnotic circles saying, “Merrily, merrily, merrily, merrily: life is but a dream.” An entire field of dreams.

I fell in love with my jazz-musician-husband, my rough-and-tumble Rochester-born father-in-law (whom we all call “Clyde,” for some inscrutable reason), AND baseball exactly 13 years ago, when Dean and I met.

I was an effete, depressed, cerebral Lefty. My husband was, and is, a participle-mangling, college-drop-out (OK: so it WAS the North Texas jazz program), musical savant of a trumpeter. My father-in-law was, and is, an irascible, soft-as-a-raspberry-truffle-on-the-interior, retired pressroom foreman, who nearly lost a hand IN a press one day, but has been playing golf ever since, through the pain.

I loved Dean at first sight, but what “language” did we have in common? On what field of modest dreams could we (and his Dad) meet, chat, and get to know one another better? Build it, and they will come . . . together.

Michael Savage misses many points, but he seems to adore his gray poodle, Teddy, and so I have hope for him, because the lessons you learn from baseball are pretty much the same ones you learn from living with and loving a dog: 1) Be loyal to your team; 2) Remember: for the most part, it’s only a game (and—goody, goody, there’s another one tomorrow); 3) Most of what’s fun in life is pretty simple and basic and repetitive (chase and fetch; chase and fetch); and 4) Once you know the “rules” (as in leaping for frisbees, making love selflessly, NOT cheating), bliss is not far beyond your grasp.

When my best friend, Gisela, formerly of Cincinnati, learned I was in love with an American (for the first time in my wanderlust-filled life) she asked only, “Does he like baseball?” If his name had been Harry, or Hal, she’d have been even happier, but “Dean” would do. And Clyde as well. (So, the latter eggs on some dumb ball club in Florida, but that’s part of baseball’s mystique as well: you bloom, and root, where you’re planted, or transplanted.)

From the horrors of modern life (in no particular order)—the friends with bi-polar and borderline personality disorder; the death-by-1,000-cuts now being inflicted on Greece by The Troika; the torture-unto-death of political activists in Syria; the continuing freedom of those who outted Valerie Plame and took us into endless war; the existence of terminal cancer in all its permutations; the fact of death, itself, for one and all of us . . . baseball is a gentle distraction.

And no, it’s NOT for “adults,” whatever the hell THOSE are. It’s for all us kids. Everywhere.

It asks so very little—the suspension of disbelief for, yes, quite a lot of innings. But it gives back so much. It is ALWAYS a “teachable moment.” It is as Zen as Americans get . . . and it’s pretty dern Zen, for all its cheddar cheese, chin music and wheel houses.

There is no crying in baseball. There is stealing bases, but there is no cheating. The team is all, the ball moves at lethal speeds, and you are required—even if you’re the pitcher at bat—to embody grace under pressure.

For the very young, there are so many lessons possible to learn over the course of one game, that it is mind-boggling not everyone takes their kids to the ballpark—especially the LOCAL ballpark in the LOCAL park; or at the LOCAL school.

A partial list of things I’ve finally “got” from baseball, that I hadn’t “got” any other way before the age of 49: 1) Like the fingers of your hands, the players are all utterly individual, but able to move, at times, in a ballet as graceful as anything at the Bolshoi; 2) Baseball announcers have the best job in the world, and they actually get paid for doing it; 3) Watching hunky guys hit balls and play a game at virtually the same speed as tectonic plates move is truly a great and guiltless pleasure; 4) Baseball will NEVER, thank God, be basketball or football: baseball is actually something I can get my number-challenged mind around, even at MY age; 5) If you play or love baseball, you’re three quarters of your way to being an American: almost everything important about the culture is somehow encapsulated in this one slow, seemingly-dumb, changeless game; 6) Baseball IS our Book of Common Prayer : for some reason, there’s more hope, faith and charity on the baseball field than in most churches; 7) The World Series is Christmas, by any name you call it; 8) When you can share nothing in the realm of politics, sex and religion with your relatives or co-workers, baseball is “the universal blood type”; 8) It’s almost impossible to carry on a fight during a baseball game, for some inscrutable reason; 9) Baseball is an alternative universe and, like Savasana, in Yoga, it will bring you back to your very human, very humble, almost-selfless center . . . if you let it; and 10) There is now a baseball team in Iraq, supplied with gear by watchers of “The Rachel Maddow Show”—a paradigm for something ineffable.

So, thanks, Clyde, for the patient lessons in lingo, though I’m still working on the function of the balk. And thanks, Dean, for the seat next to you on the sofa, and for the gift of shrieking and jumping up and down those rare years when “we” win. And thanks, to the game, itself, for being so guileless, and aw-shucks, and retro, and winsome, and seasonal, and ephemeral and permanent at the same time.

Recently, this ardent Yogini was sidelined with a sprained ankle suffered in a fall out of Sirsasana, or full, center-of-the-room headstand. In a split second, I was faced with either coming down hard on a fellow student (a teammate) or the hardwood floor. It was a no-brainer. Down crashed my ankle on the wood. So, not much Yoga of late, but lots of baseball, with one foot up on cushions: just what the doctor ordered, and as much a part of my “spiritual practice” as Yoga.

Our bodies eventually fail us. But, if we are lucky and loyal, our gray poodles remain at our side, and the Mets will come back every spring, to win, or lose: no big whup, either way. And if Michael Savage changes his grumpy old mind, I’d love to take him to a game sometime . . . along with Dean and Clyde.

Michael, you can’t shuffle off this mortal coil still slamming . . . baseball: it’s Everyman’s ticket to Nirvana, damn it all.

Note: the columnist re-runs this essay once every year . . . just because she can.