“One of the unconfessed pleasures of lying on a tree-shaded beach in the afternoon is falling asleep in the company of adults. It is one of the few times when we allow ourselves to be so vulnerable in the presence of strangers, and for that reason it is perhaps so enjoyable and liberating. It is an opportunity to become a child once again and rest in the fleeting assurance that the world is right. Mother or father will get us home and into bed even when we fall asleep on the back seat of the car.” Stefanos Christoforos 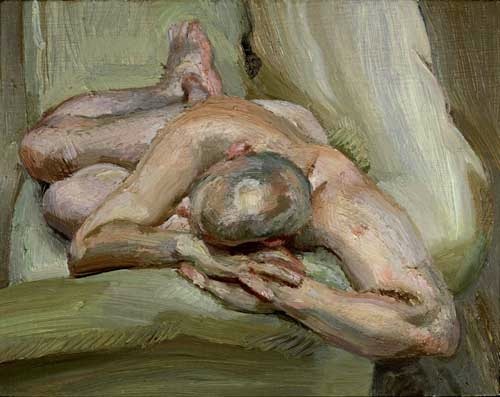 “Leigh on a Green Sofa,” by Lucian Freud.

ATHENS Greece—(Weekly Hubris)—7/1/2013—One of the unconfessed pleasures of lying on a tree-shaded beach in the afternoon is falling asleep in the company of adults. It is one of the few times when we allow ourselves to be so vulnerable in the presence of strangers, and for that reason it is perhaps so enjoyable and liberating. It is an opportunity to become a child once again and rest in the fleeting assurance that the world is right. Mother or father will get us home and into bed even when we fall asleep on the back seat of the car.

There may be other occasions on which we are released of our obligation to be social in social settings—the post-op drift into sedated sleep in the company of friends and relatives or the inebriate’s syncope at the tail end of a long party—but these are rarely pleasant, often accompanied by embarrassment or pain, and always remarked upon. Falling asleep during a play or concert, however pitiful the performance, is bad manners. Fainting, however wonderful the feeling of utter self-abandonment in that very last second of consciousness, is also bad manners, if for a different reason, and in any event not easily reproduced with any degree of certainty or safety.

Napping on a beach is different. It is as much a part of the natural order of things littoral as swimming and skipping stones and reading 600-page novels. It is really quite remarkable when you think of it. It is not often that you can comfortably lie half-naked and asleep next to friends and strangers alike. Perhaps one needs a bed as large as a beach to do so without the inevitable sexual overtones that sharing a much smaller space seem to create.

Not all beaches lend themselves to sleeping with or at least alongside strangers. Beach rackets, ghetto blasters and rambunctious six-year-olds do not a sleepy strand make. Vayia, one of the most beautiful beaches on the island of Patmos, is not the kind of beach which families with small children or bands of young teenagers frequent. The seabed at shore is carpeted with polished, eggplant-sized rocks that make entry and exit difficult for children or indeed for anyone not prepared to look ridiculous. There are no umbrellas or chaises-longue to rent, no paddle-boats or windsurf boards, and the only café is a long hike up the steep hill that rises amphitheatrically behind the beach.

It was from this café that Jörg and I had just returned after a late lunch of zucchini-and-feta pie and tabbouleh salad, and settled down at our place under the shade of a sea-pine, one of only three trees on the beach. It didn’t seem particularly crowded, even though the tree gave shade to a dozen or so of us, locals and travelers alike, Greeks and Germans and Italians. Perhaps it was beauty of the beach, the graceful weft of the spindly needles of the sea-pines, the subdued lapping of the sea against the pebbled beach that made all of us, without knowing it, lower our voices. As if we were in church.

I lay listening to the voices of two Milanese women directly behind me chatting in Italian, friends I thought, or perhaps sisters. They, too, were speaking softly, as if in concert with the light late summer breeze that swept down from the hills. My ear is accustomed enough to Italian—without really understanding it—to be able to discern at least a surface layer of feeling in the conversation, and it seemed to me that they were spinning the most wondrous of tales, a recitativo of love and heroism and undying devotion, though they may well have been talking about their children’s schools. But the affection in their voices was unmistakable. The women’s conversation became a lullaby that caressed me and, yielding to the drowsiness occasioned by the wine at lunch and the tinkling of bells as a herd of goats made its way down the hill, I fell asleep, an arm’s distance from the bent knee of the elder of the two.

It reminded me of the times as a child when I would lie, freshly bathed and talcum-powdered, on the bed of the screened porch of our summer house, and listen to the sounds of the radio coming from the living room. This is where my grandfather, Paul, and grand-uncle, Leonard, would sit on summer evenings listening to the commentary of that night’s Yankee game. By then, the games were televised, but old habits die slow, I suppose. Perhaps they actually preferred sitting in their armchairs in the dim tawny light of a pair of floor lamps and constructing the visuals on their own, with only the commentary and their imagination as guides. They did not often comment on the game themselves and, when they did, it was in the same understated tone they used when talking about everything else in their lives. And so I listened to the commentary mostly, although most of this I didn’t understand. But it didn’t matter. Like the women’s Italian stories on Vayia, it was a song that sent me to sleep.

The pair of armchairs in the living room was duplicated in other parts of this house and their house in the city: the facing pair of rocking chairs on the porch, the Adirondack chairs flanking the glider under the maple tree, the armchairs in the corner of the dining room in the city brownstone that served as their study and where they would sit in the evenings smoking their cigars or Pall Malls and reading the paper. It didn’t occur to me at the time to ask where my grandmother sat and now, as I try to reconstruct these childhood scenes, I have a hard time locating her.

I never saw the two of them argue, though now I realize there must have been occasions to do so. Leonard made a lot more money than my grandfather did, but he was essentially living in his Paul’s house. I don’t know who had bought the brownstone but, after Leonard’s wife died, sadly at a very early age in their marriage and before they had children, he vacated and rented out the top floor apartment, except for a small room at the end of the apartment which had a separate entrance. It must have been a servant’s room back in the days when these kinds of houses had servants. This very small room he kept for himself as his bedroom. The rest of his life he spent with his brother in the apartments below. In retrospect, I much admire Leonard—the brother with a real professional career, the one with a good education, the brother whose money enabled the family, including his brother’s son and his children, to live a good life—and how he deferred, at least in front of us, to his brother as the authority in the household.

I am entirely convinced that the two brothers loved each other very much. I am equally certain that they never said this to each other. It was not a language that men of their time were taught. But I like to think that they could sense this love nonetheless, as they tinkered together in the workshop or worked in the garden, Paul tending his tomatoes and Leonard trimming the leafy muffler of ivy that he had trained over the base of the oak trees. They must have heard this love, as unmistakable and clear as the timbre of affection in the voices of the women who lulled me to sleep at Vayia.

Note: To read the latest of Christoforos’s writing on his own blog, go to http://sxchristopher.wordpress.com/.