“I actually don’t think anyone—anywhere—needs these rules in order to conduct him- or herself civilly in a train station. Most people wouldn’t think of lying down in an access tunnel or spray-painting the condom dispensing unit. The posted rules and orders and commands instead serve a different purpose, though ‘purpose’ is the wrong word, since what I mean is something latent and unarticulated. These signs, taken as a whole, cultivate a just-below-the-surface awareness of the existence of rules, so that, even in a place where they’re not posted, you conduct yourself as if there were a set of house rules. In fact, you probably subconsciously invent rules in places where they’re posted.” Stefanos Christoforos 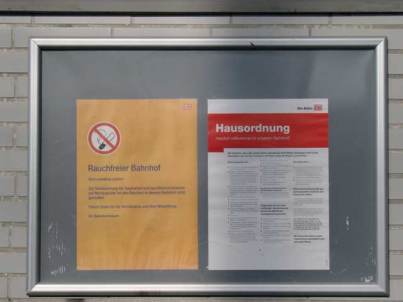 ATHENS Greece—(Weekly Hubris)—6/25/2012—I had seen the signs for the Hausordnung posted in the S-Bahn Station before: the “Rules of the House” that govern the access to and use of the train stations in the city. But I had never read them. They were so long!

But, my last time in Munich, I took the wrong train on my way to a swimming pool outside the city and wound up alone on a platform in an exurb with a 20-minute wait for the next train back to the main station. And so, I read. First I read the posters for concerts and exhibitions, and then the mobile carrier ads, the train schedules and table of fare tariffs and, in the end, having exhausted the rest of the platform’s reading material, I read the house rules.

It was, as I said, a very long list of rules. They were set in the taut, award-winning modernist font that Erik Spiekermann designed for the Deutsche Bahn. The text was crisply laid out with clear headings, appropriate use of white space, and neatly leaded, red-bulleted text. I don’t think I’ve ever seen rules laid out so attractively before.

It begins, as you think rules of a house should begin, all friendly and welcoming.

“Welcome to our station! We want all our guests to feel comfortable while they’re with us.”

And then it immediately gets serious: “The following rules are therefore to be observed.”

The German in the House Rules uses an impersonal imperative, as if these were obvious, universal rules that all sentient beings would follow as a matter of course. And then . . . 500 words of rules and regulations ensue.

The level of detail is remarkable. Bicycling in the station isn’t permitted, but neither is kick-boarding, skateboarding or inline skating. Grafitti is banned, as expected, as is dirtying or damaging the station, but it’s spelled out: it’s forbidden to spray, paint, write on, besmirch, misuse or stick things on the station’s fixtures, surfaces, ceilings and walls.

It sounds almost poetic in the German, this quartet of words for befouling the station: Besprühen, Bemalen, Beschriften, Beschmieren. Sticking things on the ceiling didn’t make much sense to me, but then I thought, OK, it’s just a matter of thoroughness.

There were rules to control the riffraff, the ones against rifling through the litter bins, begging, harassing other passengers, and sitting or lying on the floors (or on the stairs or in the passageways or access tunnels), and others that you would have thought were rules of the land and not just of the house, like the one against selling drugs. Some of the regulations seem to have been an afterthought, added in the aftermath of an unusual accident, like the one against carrying metallic balloons. Oh, and you aren’t allowed to feed the birds.

You can’t play loud music but you can organize a live performance in the station if you get permission in advance. I thought that was cool. 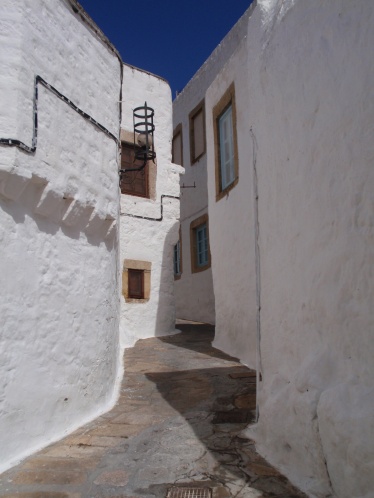 Different houses, another country, other rules.

Minor violations against the rules are dealt with by reprimands; more serious ones by Hausverbot—you’re declared persona non grata and the house is off-limits—or prosecution and claims for damages, which I have no doubt actually happens in cases.

The prohibitions end with the following:

“In cases of the deliberate dirtying of the station, we will impose a handling fee of 40€ for the cleaning costs. The same fee will be imposed in the event that a dog soils the station. We wish you a pleasant stay and pleasant journey!”

To be fair, other cities have such regulations. The ones for the New York City subway are even longer, more exhaustively detailed and spelled out in the kind of language lawyers use when speaking to lawyers. These also reflect the particular problems encountered in the New York subways: “No weapon, dangerous instrument, or any other item intended for use as a weapon may be carried in or on any facility or conveyance . . . For the purposes hereof, a weapon or dangerous instrument shall include, but not be limited to, a firearm, switchblade knife, gravity knife, boxcutter, straight razor or razor blades that are not wrapped or enclosed in a protective covering, sword, shotgun or rifle.” It’s OK to carry an unloaded shotgun, though, provided you conceal it from view. I don’t think the rules are posted, though.

There may even be House Rules for the Athens subway, but I’ve never seen these, either.

But the ones in Germany are posted.

There was another set, just as long, at the swimming pool I finally managed to reach.

In fact, it’s striking how ubiquitous the signs of the imperative are in German cities, governing who can do what under what circumstance and at what time.

I actually don’t think anyone—anywhere—needs these rules in order to conduct him- or herself civilly in a train station. Most people wouldn’t think of lying down in an access tunnel or spray-painting the condom dispensing unit. The posted rules and orders and commands instead serve a different purpose, though “purpose” is the wrong word, since what I mean is something latent and unarticulated.

These signs, taken as a whole, cultivate a just-below-the-surface awareness of the existence of rules, so that, even in a place where they’re not posted, you conduct yourself as if there were a set of house rules. In fact, you probably subconsciously invent rules in places where they’re posted.

It is symbolic that the S-Bahn regulations (which the New York MTA calls “Rules of Conduct”) are called “Rules of the House” and that they address the passenger as a guest.

Admittedly, the regulations are the expression of authority, at least that of the train’s management. But, in a way, they are also the encapsulation of the collective will of the community for the good of the community, or at least of the will of the vast majority of its members who are not beggars, graffiti vandals and persons deeply attached to metallic balloons.

Perhaps this plethora of posted commands and regulations seems oppressive to those of us who live in a country where our approach is less imperative than “infrahortative”; where in the place of signs and ordinances we have pleas of discouragement without much bite, as witnessed in the complete failure of two successive smoking bans.

For purposes of comparison, I submit a typical village in Greece: a town without litter. An island village, to be specific. I walked through its streets for an hour and didn’t find a piece of garbage on the street. No empty cartons or crumbled pastry wrappers, no soda cans or tissue paper. I think I saw a few cigarette butts, but they had settled deep into the cracks between the cobblestones, where a broom couldn’t easily dislodge them. The town has sanitation workers but their job is to pick up the garbage, not to clean the streets. They don’t need to.

One morning, I walked with a local resident down the old stone path that leads to the port. She picked up two plastic water bottles that had been tossed by the side of the path. “Foreigners,” she said, with an air of resignation, as if speaking of barbarians of whom one necessarily expects the worse. Later, she brought us a basket of wild asparagus and dandelion greens she had gathered from the hillsides, a slab of a tangy, fresh farmer’s cheese, and a basket of eggs her chickens had laid.

Everyone whitewashes the fronts of their houses every spring here. It helps protect the houses from damp. But they don’t need to do it every spring. I think they do it as much for their neighbors as for themselves. None of this is written up in town ordinances, but they do it anyway.

On every island in the Aegean.

There are no Rules of the House posted anywhere in these towns, but rules are followed, faithfully and assiduously. The rules are probably just as extensive as the ones posted in the S-Bahn. They are rules about painting your house and sweeping the alley and weeding the cobblestone walkways.

There are also more complicated and encompassing rules about hospitality and generosity and solidarity; about the responsibility one has as a resident of the community to the common good, though none of these are apprehended as external regulations but rather, again, as the expression of the collective will of the community. For the House is the community, and each resident is both guest and host.

Though no one tells them to, guest and host are called upon to paint their houses, but also to protect their common cultural legacy and contribute to the community, to look after and minister to their neighbors and guests.