The Slings of Outrageous Fortune 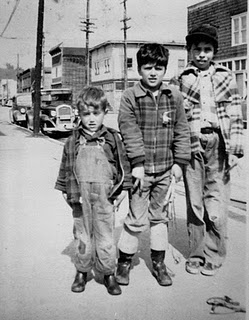 The Lawless Years: Urchins on their home turf, armed to the teeth and dressed to kill, First Street, Raymond, Washington, circa1949-50.

From left to right, Billy (Squint-eyed Kid) Zambaras, six years old, flaunting his intimidating, fearsome mien in the face of the blinding, winter light; Christos (Ladybird Killer) Zambaras, eleven, notorious for disarming birds by flipping them the peace sign with his right hand just before slinging the fatal shot at them with his left; Angie (Turkey-Diddle-I-Them) Buttrick, 13, lanky lobber whose favorite targets were the rear ends of drunk loggers, truckers and longshoremen staggering out of his grandma’s saloon.

Meligalas, Greece—(Weekly Hubris)—05/16/11—According to Hoyle—as mentioned in his groundbreaking study of poker-faced criminals The Evolution of Slingshots in the United States and Their Role in Intimidating Stoolpigeons—these three infamous Greek-American punks were the forerunners of inner city gangs which were later to terrorize urban America, as they were the first to successfully employ the now-classic urchin dictum adopted by so many Johnny-come-lately wannabe professionals from all walks of life: “Never Get Caught Playing According to the Rules,” or its more famous, more efficacious poetical manifestation adopted so winningly by so many of our back-watching, back-stabbing, self-righteous politicians, to wit:

These tatterdemalions were also amongst the first to introduce hodgepodge raiment, which became so popular in the latter half of the previous century–notice the chaotic, albeit exquisite juxtaposition of haberdashery covering Squint-eyed Kid’s frame—not to mention the patent rubber galoshes perfect for sloshing through muddy puddles just before heading back home to headquarters.

Unfortunately, the only gang member still living is The Squint-eyed Kid, who had the good fortune at the tender age of 27 to escape from Life in the Klutzes of America and is now happily married, living the Life of Riley in his beloved Hellas and still thinking seriously of writing his poetic Magnum Opus, I Was a Gunsel Who Killed Mockingbirds for the Thrill of It, of which the following will be the opening salvo:

“Poet in the Aviary”

No more beating round the bush, boy—
Just murder for the thrill of it, fire at will.

Bad chicks’ blood seeping under the sill,
That’s more like it—

No more mockingbirds to kill.

And since most of you out there are burning to find out which will be the last one to keep your poetic fires at a constant 451 degrees Fahrenheit , here it is:

As far as
The eye of the crow can see
The trees, the trees have been twisted,
Toasted, burnt to a crisp;

Birds no longer
Gather here to eat red berries
For breakfast, or sing
A song out of Mother Goose,

Say of innocence, of sixpence,
A pocket full of rye,
Of four-and-twenty million
Blackbirds baked in a pie.

Vassilis Zambaras According to such reliable inside sources as The Weekly Hubris’s Publishing-Editor, VazamBam aka Vassilis Zambaras is all of the following, and more, in an order no one can vouchsafe as definitive: a publishing poet who writes every day of his life; a hugely successful father (and a not-so-very-successful local political candidate); a professor of English as a Foreign Language, with portfolio; a Renaissance Man of many skills, useful and not-so; a fount of information about his particular corner of his birth country; an unstable and utterly unique mix of Greek and American, American and Greek; and the man fortunate and wily enough to have made off with Messenia’s loveliest and most talented local daughter as his child bride. Besides being all the aforementioned, other more dubious sources have also reported seeing him hanging out at the corner of vazambam.blogspot.com—in the guise of a “new old kid on the blog, with an occasional old or new poem written off the old writer’s block.” Author Photo: Pericles Boutos
View all posts by Vassilis Zambaras →
This entry was posted in Uncategorized. Bookmark the permalink. Follow any comments here with the RSS feed for this post. Both comments and trackbacks are currently closed.