A Lie? ’Tis But The Truth In a Masquerade

“The paired masks of the muses, Thalia and Melpomene, Comedy and Tragedy, hint at the expanse of expression and the range of characters contained in theater. They also suggest the duality that masks represent: character revealed or character hidden.”—William A. Balk, Jr. 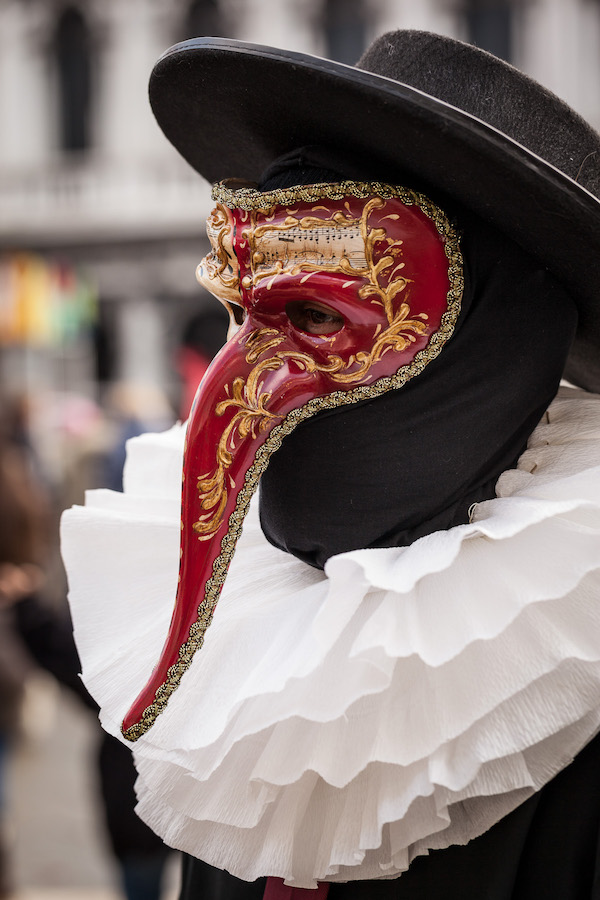 ELKO South Carolina—(Weekly Hubris)—December 2016—Her sudden, madcap decision to spend a few days visiting Rome and Venice had resulted in my friend’s returning with a gift for me, purchased from a mascheraio on one of Venice’s canals and offered in a  sumptuous, handled bag of marbled paper and gilt tissue. I unwrapped a glorious zanni mask, the face of one of the formalized masked characters from the Carnevale di Venezia, the one with the obscenely protuberant nose. Not a plastic version made in America or China, this mask was fashioned of gesso and gold leaf, to be saved and worn many times for Carnival.

The Venetian mascheri had made masks for generations of revelers; and were a deep-pursed scion of a Sforza or Medici to request a mask from a shopkeeper’s great grandfather, one might have been painstakingly modeled of worked leather, instead of gesso and gold leaf, and adorned with the rarest of avian plumage.

Perhaps instead of this proboscis-mask, a Carnival-goer might ask for a special version of the Medico della Peste, the Plague Doctor, whose mask features a very prominent bird’s beak for its nose. It was during the time of the Black Death that doctors wore such masks, their hollow beaks filled with sweet-scented herbs to block the scent of death, the understanding at the time being that disease was caused by “bad air” or miasmas, rather than microbes. Properly outfitted, the Plague Doctor would wear a floor-length cloak of leather or waxed canvas, the better to resist the permeating stench of his patients. He would cover his head with a large hat, and perambulate on his morbid rounds armed with a stick, used to disrobe his patients without actual contact or point to areas of concern on an afflicted body. 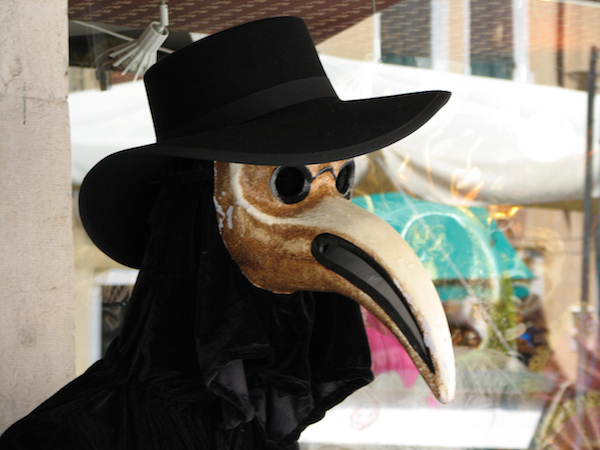 Thus, a mask whose original purpose was to protect a healer from disease, eventually came to represent one of the standard characters of revelry and debauchery during Carnevale. A modern physician, of course, regularly dons a mask and white coat for purely functional reasons, not unlike the medieval medico. Once one has donned the mask of the Medico della Peste, which character—the doctor or the reveler—is one portraying?

The layered complexity inherent in masks apparently intrigued director Stanley Kubrick, whose last film, “Eyes Wide Shut,” features a disorienting and tantalizing masked ball central to the characters’ voyage of sexual discovery and moral perception. Evoking ancient, secret rituals, this movie scene uses the masked characters to turn mystical and vaguely threatening the people one would encounter in daily life—the mask exposing, rather than obscuring, an essential dark side of the person. 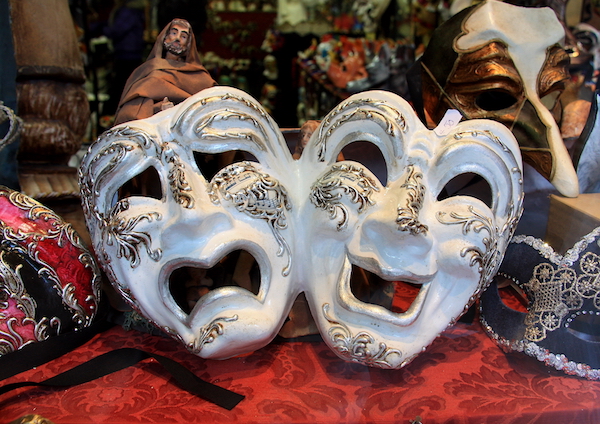 These seemingly opposing tropes—masks worn to make one’s character and identity unknowable, and masks worn to reveal a hidden nature or an innate characteristic—lend to masks a particular affinity for theater. Indeed, the best-known symbolic representation for the art of the theater is a pair of masks, one drawn from Thalia, the Greek muse of comedy and bucolic poetry, and the other characterizing Melpomene, the muse of tragedy. One is a laughing face; the other sad or weeping.

Venetian Carnevale, which featured masked doctors of the Plague, also peopled the streets with other standard characters/masks. Some were drawn from historical precedents of masks worn in social situations; others had their origins in the Commedia dell’arte, the popular itinerant theater of the 16th Century and later. 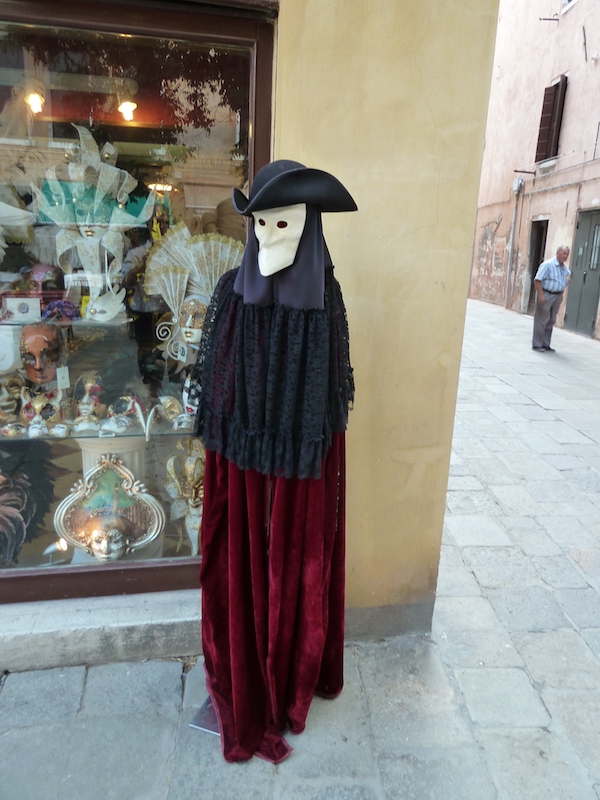 Among the masked characters of the historically social type is bauta, perhaps the most commonly worn of the Carnival masks. Typically worn with a tri-corn hat and a long cape, the bauta mask covers the wearer’s entire face. It has holes for the eyes and no mouth at all; but there is a prominent pointed chin, which permits the wearer enough room to talk, eat, and drink without removing the mask. Its very simplicity suggests it derives from the most basic of masks which obscured the face and allowed the wearer to wander incognito. It is the legendary mask of kings and princes who wanted to interact with the masses, unrecognized.

But it is the masks from the Commedia dell’arte which tease the mind and taunt the sensibilities of revelers. Among these is Arlecchino (Harlequin), known as much for his motley costume of multi-colored patches of fabric as for his arched eyebrows and the large boil in the middle of his forehead. Arlecchino is a fool, in the classic sense, and may have some wicked or even demonic traits. He is in love with the character, Colombina.

Colombina’s mask is a half-mask, covering the eyes, cheeks, and perhaps the nose. She, like Arlicchino, is a servant, and her costume is often a patchwork, too. Unlike Arlicchino, however, Colombina often has a bit of intelligence. Her primary function often is to fend off the advances of the unwelcome Pantalone.

Pantalone is the dirty old man, the butt of constant ridicule; always trying to make a deal, which always fails. His mask usually has a large hooked nose, which is not unlike the very prominent codpiece he wears, and both proclaim his excessive virility. Everyone knows, of course, that his claimed virility is long gone.

The masquerade of Carnevale di Venezia, then, derives much of its narrative and most of its symbolism from the theater of the Commedia dell’arte. At roughly the same period that the Commedia was becoming well established in Europe, 16th-Century Japan was solidifying another theatrical tradition in what became Noh.

Noh theater is defined by its masks, but the masks originally carried primarily religious meaning. It was during the late Muromachi shogunate—the 16th Century in Western calendars—that the more secular, and human, characteristics of the masks began to be defined. 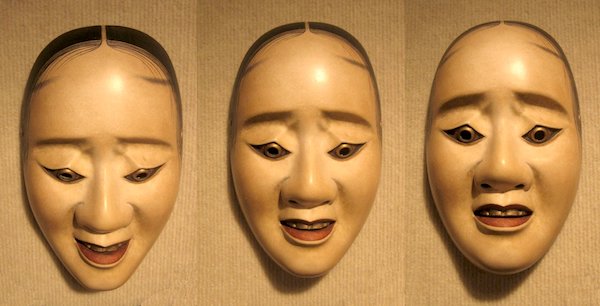 The best Noh mask-makers might fashion a face with what, to Western eyes, appears to be a completely blank expression, revealing no hint of emotion—a seemingly white canvas. The maker’s object, however, is to render a mask which allows for the expression of many emotions, not just one. It is the Noh actor who imbues the mask with the intensity of feeling the character and scene require. The “blank” mask may assume a hint of a smile when the actor tilts the mask at a slight angle; or, similarly, should the master-actor skew the mask ever so slightly downward, the mask may appear to frown. A full range of emotions is thus released within the mask, the actor, and the theater.

Even older, Athenian/Greek performance employed masks for somewhat different purposes, although the conventions of both Greek theater and Japanese Noh appear to have derived from religious practice. Greek theater evolved from Athenian festivals celebrating Dionysus, the god of festive abandon, of wine and of ecstasy. Tradition has it that theatrical masks first were worn by Thespis, the poet, who is credited with being the first to portray on stage, not himself, but a character other than himself. He is said to have covered his face with white lead paint to obscure himself, the better to become the character.

Thespis later realized that he could define the essential emotional quality of the character, magnify the performance’s impact throughout a theater seating thousands, and even switch among different characters, if he were to fashion a mask for each persona. Since the theater stage originally held a single actor at any time, one performer employing masks could readily portray a number of interacting characters.

Indeed, such thespian versatility made it easier for women characters to appear, women’s actual stage presence having been forbidden; male actors, once they had donned the mask of a female character, immediately were accepted as the female character.

The masks of Noh and of Greek theater never became so integrated into the daily life of the citizenry as did the masks of the characters of the Commedia dell’arte. Not only the theatrical masks of the Commedia, but other masks of the professions, such as the plague doctor, or of social interlopers, such as the prince gone slumming, found their way to the streets and salons of Venetian society – at least until they were banned. Even confined to the festivities of the Carnevale di Venezia, however, the masks of all – the princes and doctors, the comic actors – all became available to any Carnival goer who sought to join the masquerade.

The paired masks of the muses, Thalia and Melpomene, Comedy and Tragedy, represent the wide range of expression and diversity of characters contained in all theater, not just the Greek form. They also suggest the duality that masks represent: character revealed or character hidden.

Even in our own day, masks may play a suddenly prominent social role. The masked character that may most precisely evoke our own era might well be the mask of Guy Fawkes—the Face of Rebellion . . . and, as the wits have it, “the last man to enter Parliament with honorable intentions.”

Vilified for centuries as the face of the Gunpowder Plot, a failed attempt in 1605 to blow up the Houses of Parliament, Guy Fawkes received something of a karmic makeover in Alan Moore’s V for Vendetta comic book in the late 1980s. Fawkes’s image in that comic became the iconographic image for revolutionary action, and it was adopted in the last decade by the group Anonymous, worn by participants in actions protesting The Church of Scientology, the Ku Klux Klan, Wall Street, and proclaiming the cause of libertarianism and opposition to capitalism.

Guy Fawkes, long condemned and annually burned in effigy for his revolutionary effort, has now become a common figure extolled by many for that revolutionary effort. And once again, even in our own time, a mask obscures the wearer, reveals a concept larger than the individual, and confounds societal expectation. 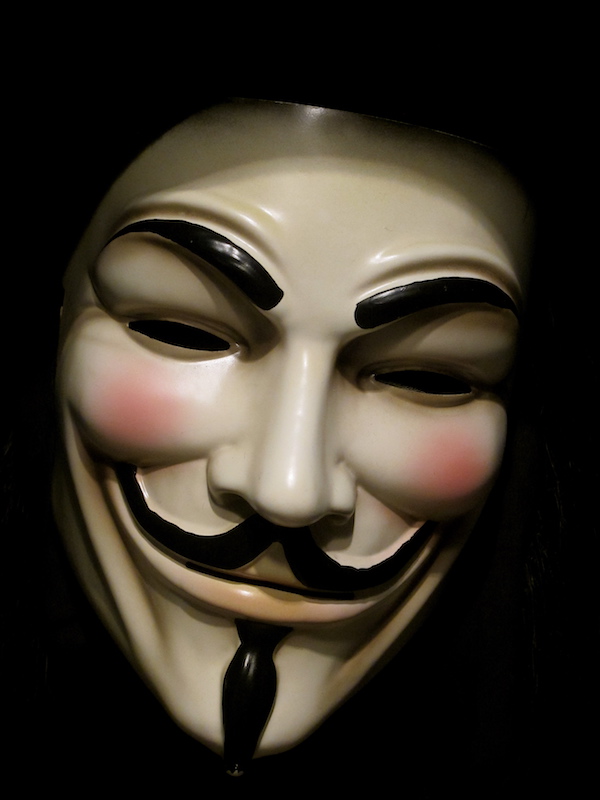 Images: The six images used in this essay all derive from Wikimedia Commons. The owners of the images are, respectively: 1) jimmywee; 2) Norbert Nagel; 3) Christine Zenino; 4) Abxbay; 5) Wmpearl; and 6) Enrique Dans.

Born and reared in the Coastal Plain of South Carolina, William A. Balk, Jr. was educated at the state’s namesake university, became an activist confronting the power of the modern State and its military, and spent two years in a radical gay commune in the nation’s capital. He has taught textile construction and design for the Smithsonian and Textile Museum in Washington, collected modern porcelain masters, and has submitted to a peculiar affinity for independent book stores. Balk returned to the South Carolina Low Country in middle age, as well as to his extended family, and a literary life lived largely out of doors. Book stores and gardening remain his perennial passions, as does writing. He has been a regular columnist for “The Lowcountry Weekly” newspaper for seven years; he is included in the award-winning book, Our Prince of Scribes: Writers Remember Pat Conroy. He has assumed several new roles in recent years, including caregiver for his near-centenarian mother, advisor to the Pat Conroy Literary Center, and member of the Board of Directors for South Carolina Humanities. Like one of his heroes, Epicurus, whose philosophical school was called “The Garden,” Balk’s aim has long been “to attain a happy, tranquil life, characterized by ataraxia—peace and freedom from fear—and aponia—the absence of pain—and by living a self-sufficient life surrounded by friends.” (Author Head Shot Augment: René Laanen.)
View all posts by William A. Balk, Jr. →
This entry was posted in Uncategorized. Bookmark the permalink. Follow any comments here with the RSS feed for this post. Both comments and trackbacks are currently closed.

3 Responses to A Lie? ’Tis But The Truth In a Masquerade