Probably, most Americans don’t have that experience but, in Alaska, where I live, it is not so rare an occurrence. And the winter of 2012 has been more “moose-active” than most. At the time of this writing, the city of Anchorage has had 106 inches of snow. Even in a snowy place like Alaska, that is an exceptional amount of snow. At least by February. March and April tend to be our snowiest months, but the snows came full and hardy and early this year. A series of blizzards left us with a beautiful, snow-altered landscape. Drifts are piled as high as houses; roofs are sagging under the weight of the snow. Huge berms are piled up like snow walls, and traveling through the city is almost like moving through snow tunnels on either side. 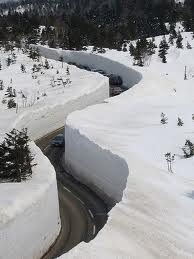 Any time of year, the moose may be seen wandering through neighborhoods, weaving in and out of traffic on expressways, standing in ponds and munching on lily pads. Most Alaskans are happy to have the moose around. There is still something thrilling and primal about living close to wildlife and nature.

However, a few Alaskans (who probably should live elsewhere) find the moose annoying. My cranky neighbor across the street flies out of his front door with a steel spoon and a metal pan and bangs and clamors hysterically with them whenever a moose comes near his yard. Granted, they love to eat his tulips in the spring (a major source of irritation to him) and they often leave fragrant deposits on his well-manicured lawn (another source of irritation). It is almost as though the moose know that he is not their friend; they seem to visit his yard and antagonize him more than anyone else.

In winter, when the snows come, when the mountains are covered in deep white, when the winds blow drifts higher than trees, more moose come down into the city, searching for food and places to walk without being up to their necks in snow. No one knows exactly how many moose are here in the winter, but it is significantly more that the 300 usual residents, and so moose sightings are common occurrences.

Moose are not vicious animals, not predators, not the natural enemies of other living creatures. They are instead sleepy-eyed, loose-jointed ramblers, who move slowly through the forests and along the tundra and poke among the ponds and streams in summer, when the ponds and streams are not frozen.

Yet moose can be extremely dangerous. They are unpredictable. Much of the time a moose will listlessly leave alone any man who approaches it, but there are times when a moose may attack. If a cow moose has a calf nearby and feels suddenly threatened in some way by people or dogs, she may lunge toward the threat. Sometimes, a moose can be dangerous by accident. Rather clumsy beasts, they sometimes stumble into people and injure them without meaning to.

Collisions between automobiles and moose on the road are, unfortunately, commonplace. And hitting a moose can be very much like hitting a truck head-on. Drivers must be careful. There have been, lamentably, several incidents of moose attacking people who have crossed their paths or who (like my neighbor) deliberately annoy them. An elderly gentleman was killed by a moose a couple of winters ago when he encountered it on the campus of the University of Alaska. Apparently, the moose had been tormented with snowballs thrown by college students and, when he saw the elderly man walking alone, he sought his revenge and attacked.

The average moose weighs about 1,500 pounds (give or take a few hundred) and the man did not have a chance. 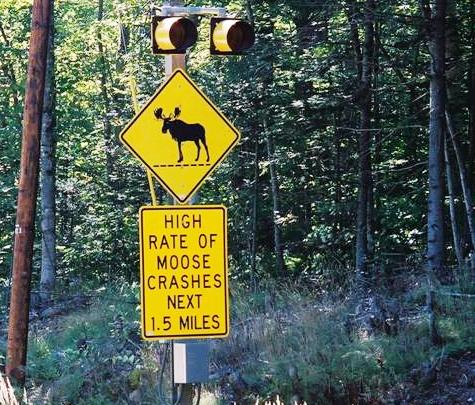 Recently an 85-year-old Anchorage woman made national news when she attacked and drove away with a snow shovel a moose that was trampling her husband into the ground. It was a brave thing to do and it did apparently save her husband’s life, but the moose could just as easily have turned on the woman with the shovel and trampled her as well. Fortunately, this moose was startled and hurt enough by the snow shovel wisely to move on.

My first experience with a city moose was a memorable one.

My first winter in Alaska, when I was in my early 20s, I was pulling my then two-year-old daughter, Joanna, behind me on a sled in a large field beyond our house, when we came face to face with a large cow moose.

Being a greenhorn in Alaska at that time, I didn’t quite know what to do, so I kept walking, thinking that maybe if I ignored the moose, she would ignore me as well. But she decided not to. She lunged towards me. I remember that I pulled Joanna off the sled and thrust her behind me. Then. I picked up the sled and began to sling it (much like King David his slingshot, I thought) by its rope.

When the moose came close enough, I bonked her between the eyes with the sled. She staggered, looked startled, shook her head, and then moved toward me again. Her ears were pulled back, flattened, which I have since learned is a sign that a moose is really pissed. She came on again and I swung the sled by its rope yet again, smashing it against the side of her head. This time, she staggered again, shook her head again, and then, to my incredible relief, stumbled away. I felt like a hero. Next day, when I told my friends and colleagues about my adventure, they all said, “Are you NUTS? That moose could have stomped you and your kid into oblivion!” So my self-proclaimed hero status was somewhat tarnished. I have since learned to be more cautious around moose.

Several winters, we have had moose use our yard for their bedrooms. They like to lie against the house, where it is warm. Many a time we have gone outside during the night or early in the morning and found a couple of moose snugly pressed against the outer walls of our house, sound asleep.

Every Halloween, my daughter, Joanna, has a pumpkin-carving party and we all come to create our most imaginative jack-o-lanterns. When the party is over, she puts the jack-o-lanterns, with candles flickering inside them to animate their faces, in her front yard, a treat for the neighbors. And, as it turns out, for the moose as well. Late in the night or the next day, when the flickering candles have burnt out, Joanna and her family usually see two or more moose in the yard, happily devouring the jack-o-lanterns, their special holiday treat.

My younger daughter, Heather, often has moose in her tree-filled yard as well. They come to eat the bark of the birch trees and to nibble on any tender young branches that might still be there. A regular resident of Heather’s yard is a female squirrel called Sandy (named by my grandsons after the underwater-living Texas squirrel in “Spongebob Square Pants”).

Sandy has appropriated some of the birch trees as her own and, when the moose come to nibble, Sandy goes ballistic. She rushes out on the branches and chatters and chatters angrily at the moose, using all kinds of inappropriate squirrel language, I feel sure. But the moose pay her no mind at all. They simply look bored and continue to strip the bark off the trees and nibble on Sandy’s branches.

. . . all this brings me back to my original comment, though: A moose fell on my car today.

A young bull moose wandered into my yard to munch on the trees and climbed up to the very top of a large berm of snow to a height that enabled him to eat the tasty tops off the trees. He was in paradise, until he began to realize that he was not standing on a solid hill but on a mountain of soft snow. He started to sink, then, panicked, and began to thrash about, desperately trying to stop himself from sinking deeper.

Finally, he struggled out of the snow and slid, like Bambi learning to walk on ice in the Disney classic, all four legs sprawled, down the side of the berm, right into my driveway. In his panic, he struggled to get to his feet, and his back hoof struck the side of my car, leaving a dent about the size of a baseball. When he finally got to his feet, he took off quickly, no doubt not wanting to be responsible for the dent he left in my car.

But such bumps and holes and dents are usually chalked up as war wounds in Alaska. Very few people have pristine cars. If not damaged by wildlife, the cars are covered with mud during Break-up (our special Alaskan sub-season); windshields are usually chipped and nicked by pebbles from gravel roads and cracked by severe cold. Keeping a car immaculate is virtually impossible.

And having a moose fall on your car is not nearly as bizarre as it might seem.

8 Responses to Adventure with Moose & Squirrel