“If the United States were a true democracy, Donald Trump would not have become President. In 2016, Trump lost the presidential election by 3 million votes. (Why Democrats have not been shouting this fact from the rooftops for the past four years is a mystery, but it is rarely mentioned.) Trump stole the presidency through the corrupt and undemocratic system known as the Electoral College. I understand that this institution was set up after the Civil War to placate and reintegrate the slave states. Perhaps after 150 years, they have been placated enough.”—Michael House 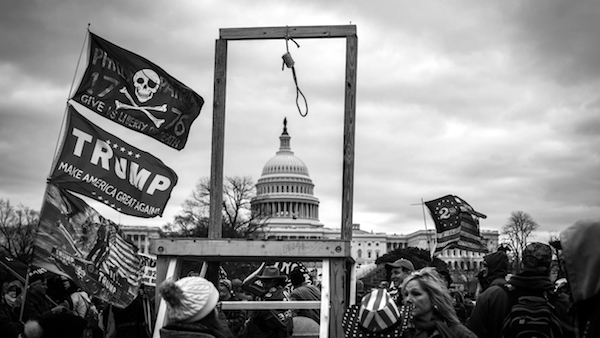 Noose at the Capitol on 6 January 2021. (Photo: Shay Horse/NurPhoto/Getty.)

KING’S SUTTON England—(Weekly Hubris)—February 2021—What follows may seem trite and obvious to close followers of American politics. But close followers sometimes can’t see the wood for the trees. An outsider’s view may be useful.

If the United States were a true democracy, Donald Trump would not have become President. In 2016, Trump lost the presidential election by 3 million votes. (Why Democrats have not been shouting this fact from the rooftops for the past four years is a mystery, but it is rarely mentioned.) Trump stole the presidency through the corrupt and undemocratic system known as the Electoral College. I understand that this institution was set up after the Civil War to placate and reintegrate the slave states. Perhaps after 150 years, they have been placated enough.

This loser-takes-all system enabled Trump to become President although the plurality of American voters did not want him. Finally, to get rid of him, they had to be even more emphatic in 2020. The same system led to disaster in 2000. George W. Bush lost the election, won in the Electoral College and then invaded Iraq, a country which had nothing to do with 9/11. It always seems to be the Republicans that benefit from the Electoral College anomaly.

So scrapping the Electoral College would be the first step towards a democratic system of government.

The most profound consequence of Trump’s stealing the Presidency (apart from the treasonous attack on the Capitol) was that he was able, with the assistance of the Senate, to inflict on the Supreme Court three extreme right-wing ideologues, one of them an attempted rapist, one of them a religious bigot. Those appointments will set back democracy in America for decades.

Why are there two Dakotas, two Carolinas and two Virginias? Why have these areas four senators each instead of two? No doubt the Federalist Papers will carry some profoundly wise explanation as to why the Senate was set up the way it was, but 240 years later, it cannot hold good in a country that wants to be considered a democracy. Those three extremist Supreme Court Justices were confirmed by a Senate in which Democrat candidates won substantially more votes than Republicans. The new justices clearly don’t reflect the views of the voters as a whole.

So: first step to democracy: abolish the Electoral College. Second step: make the Senate a representative body. The first might happen one day, when the Democrats have a proper majority in the Senate. The second, I suspect, never. Certainly, nothing will happen in the next two years. The swing vote in the Senate is a man called Joe Manchin, of West Virginia, one of the Trumpiest states in the Union. He sits as a Democrat but is effectively a Republican. When Jake Tapper asked him whether he supported gun control, he nearly had a fit of the vapors. He has made it clear that he won’t support creating a Supreme Court that is representative of the country by expanding it. So, unless the Democrats harvest Republican senate seats in 2022, any sort of democratic reform is unlikely. As to reform of the Senate, turkeys rarely vote for Christmas. And of course, it is a long way up itself. If I hear another commentator calling it “the greatest deliberative body in the world,” I shall throw up.

So what is the path to reform? The first step appears to be to grant statehood to Puerto Rico and to the District of Columbia, which is more heavily populated than Wyoming and Vermont. That should go some way to solidifying Democratic control of the Senate.

Democrats must learn that power, once gained, must be used, ruthlessly if necessary. Power begets power. I’m sure we all had a little frisson of pleasurable smugness when Michelle Obama said, “When they go low, we go high.” But she was wrong. A much better principle would be “when they go low, we go lower.” Don’t set a moral example to the deadly viper, kill it.

As Bill Maher said to Steve Bannon during an interview, “I wish we had someone on our side as evil as you.” The end sometimes does justify the means.

The third pathway to democracy in the United States is the elimination of voter-suppression. We shouldn’t get carried away in our admiration for the Governor and the Secretary of State of Georgia, who bravely refused to be intimidated by a low-life mobster. By all accounts, they did their utmost to put barriers in the way of Black and poor would-be-voters. And Trump’s criminal threats are likely to ensure that voting in Georgia will be made more difficult than ever. There are two routes to eliminating or neutralizing voter-suppression. The Stacey Abrams method is to inspire people to work tirelessly to get the vote out. But not every state is lucky enough to have a Stacey Abrams. The other method is to take control of state governorships, state Senates, and state Houses. I read about Republicans being elected unopposed in red areas. Every seat must be contested.

Trump leaned on Vice President Mike Pence to take some ill-defined course in the Electoral College to steal the election. He said in a speech that if Pence didn’t come through, “I will like him a bit less.” He sounded like the president of the Friends of Italian Opera talking about Spats Columbo. But his audience got the message. The dog-whistle was heard loud and clear. Hence the chants in the Capitol building of “Hang Mike Pence.”

So, my advice to America—become a genuine democracy. Then you will lessen the risk of being saddled with a president who is a traitor, a criminal, a racist, a congenital liar, a sex-pest, an adulterer, probably a rapist, an ignoramus, a psychopath, a narcissist, a vulgarian, and not a very nice person, generally.