BURLINGTON North Carolina—(Weekly Hubris)—2/13/12—The team of horses my Grandad, Rufus Idol, used on his small farm in Deep Gap, North Carolina, brought together a heavyweight, Joe, mostly Percheron, and Dan, mostly a mixed breed gelding lassoed out West and partly broken in to earn his feed. Dan, a motley white, weighed in at several hundred pounds lighter than Joe, but a proud streak in him kept him eager to do his part in plowing and other jobs around the farm. 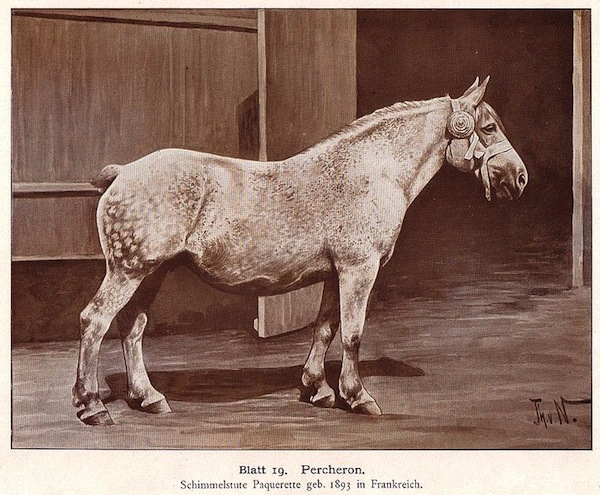 As befitting someone with a heritage of fine breeding in Northern France, Joe proved every bit the gentleman that Dan wasn’t. Perhaps it was Dan’s proud streak that lead him to strain every muscle to match Joe’s strength. That strain produced blasts of wind and showers of turds when Dan really buckled to the task of pulling a heavy load. He broke wind with practically every step he took, and he left behind him a trail of excrement—tight, hard little balls as black as Joe’s hide.

When he fired up, Rufus disregarded him, chewing his tobacco and spitting from time to time, but his grandsons shouted, “Watch out, there he goes again!” How often he “went” was to my brothers and me amazing. Somehow, we expected good manners, but Rufus knew that Dan’s upbringing was on the wild side, that a horse taken against his will from a free range would do more than kick up his heels.

And more he did, freedom-loving, ill-bred, mean-spirited bronco that he was. When not hitched to plow or wagon with Joe, but simply asked to allow someone to ride him, bareback, to a watering hole beyond the barn, he quickly got rid of riders by heading for a nearby barbed-wire fence and forcing his rider to dismount or suffer deep scratches from rusty barbs. Or, if the fence were not close by, he rushed towards a low-hanging limb on an apple tree and brushed the rider off, suffering pain the while as the rider tugged energetically on the bridle. “Gee, Haw, or Whoa” meant nothing to him as he headed towards fence or tree. Off the rider must come, and off to the watering hole, by himself, he would trot, thank you.

His fastest means of clearing his back of riders, and the one he seemed to enjoy most, was his attempt to champ a pound of flesh from the calf or thigh of whoever among us was foolhardy enough to remount him after being bested by his barbed-wire and tree-limb gambits. A grazing nibble proved ample for his needs, for our quick jerk to avoid his sharp incisors sent us over his rump and sprawling to earth. Never heeding the mighty tugs we made to keep him from twisting his head around, he swiftly bent his neck and champed foot, calf, shoe, or pant leg, whatever he could reach. Who would dare ride such a vicious steed? The price Dan exacted was blood if the rider’s jerk backward was too slow.

Better suited for action as a bucking bronco in a rodeo, Dan came to Rufus’s stable because he was a bargain, a half-wild colt that the horse trader was eager to move. Granddad’s patience and kindness won Dan to plow, sled, and wagon and turned him into a lightweight draft horse . . . and thus his role as Joe’s teammate.

But they rarely spent their nights under the same roof, Joe being stabled in my dad’s barn. If they were to work together, Rufus would have to come for Joe or wait for a grandson to bring Joe to him.

Sociable from head to hoof, Joe enjoyed hanging out with my brothers and me, preferring among all of us Brother Bill. If I called Joe from the pasture, he merely raised his head momentarily to tell me he’d heard me. “If you want me,” he seemed to say, “you’re gonna have to come get me.” All Bill would have to say was, “Come, Joe, come,” and the horse trotted right to him; not always rewarded by an apple or carrot.

They often worked together, cultivating, raking hay, hauling loads of potatoes on sleds, dragging logs to the backyard to be cut up for firewood.

Always patient and gentle, Joe stood still while two or three of us, clamoring on from stump or fence rail, straddled his broad back and “Clucked, clucked” him to move off at a slow trot.

His only restive moments came during outbursts of thunder and lightning. During such times, he wanted to be free to trot to the barn, harness or no harness. Otherwise, he was never spooked.

Dan’s vulgar habit of breaking wind and sending volleys of backdraft from beneath his upraised tail found no imitator in Joe. His one indiscretion was to allow his manhood to air out as he grazed, his member dangling freely as he fed.

Petted, loved, and deeply appreciated for nearly 20 years by my family, he suffered deep bruises to his chest when a neighbor borrowed him to remove stumps. A painful knot arose under his collar, and only then did he balk at doing what was asked of him. “I have to have a workhorse,” my dad said. “That means I must trade Joe, if I can make a deal with a horse dealer.”

A local dealer, Mr. Tugman, had a younger horse, “a good plow horse,” or so he said, and he’d have to have some boot “since Joe was much older and banged up pretty bad.”

The dealer hitched his horse to a sled and drove him around the barn to show that the horse was broken to work. Dad was pleased and sealed the trade by throwing in a young heifer.

Back at his own place with his new horse, he grew sick of his trade, for the horse balked at pulling a sled and a hay rake. “I want Joe back,” he said. He immediately called Mr. Tugman, saying, “If you’ll bring Joe back, you can have your horse and keep the heifer.”

The dealer returned Joe, who received a hearty welcome home.

By cutting a hole in Joe’s collar large enough to take pressure off the sore knot, Dad once again could depend upon Joe for his chores as a draft horse.

I suppose Dan was happy to have his teammate back. Both resumed their roles as plow horses for Rufus, obeying him and working together without fidget or fuss, Joe the noble Houyhnhnm; Dan the bronco on his best behavior. Separate, Joe could have stood in as a model for Swift’s Houyhnhnms, while Dan repeatedly revealed himself to be a Yahoo masquerading as a bronco.

Yet, painful as his champs on my feet and legs remain in memory, I have a tinge of sympathy for Dan: he was born to freedom on the Western range and had to make the best he could of his Eastern bondage. Racing with the wind should have been his lot.