ATHENS Greece—(Weekly Hubris)—2/13/12—With the horrific photos of the gleaming cruise ship keeling over within spitting distance of the Italian shore, my thoughts naturally turned to my own voyage on a Costa line ship. Mine was no near-Titanic experience, nor did I travel in great luxury. No, I sailed from New York to Genoa on a plucky little cargo boat, the Pia Costa, with all my worldly goods packed into a container. 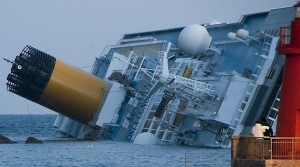 The Costa Concordia, going down.

That was back in September, 1971. I’d spent six weeks in Rapallo, on the Riviera, with my five-year-old son and my brother, Tom, and his wife and three boys. Three days after we arrived, ostensibly to spend some time with our parents, who had retired there two years earlier, I made up my mind to stay. Finished with New York. Basta.

My marriage was over, I’d lost my job at City Hall and, the final blow, my bicycle was stolen from the corner vegetable shop on 80th and Broadway, with my supper in the basket. What was there to go back to?

The Riviera held consolation: family, beauty, focaccia, pesto, vino . . . . The sea was no match for the Aegean, the cafés filled on weekends with what my aunt called “the rich people from Milan” could not compare with a Greek taverna. But I feel at home almost anywhere on the Mediterranean and so, with a rapidity and firmness not usually typical of us vacillating Librans, I resolved to sever my ties with Manhattan. And never had a second thought.

After the holiday, I flew back to New York to close the apartment and pack up my life, leaving my son with my parents. While I was gone, my mother found a house right on the water for me to rent at winter prices, and I managed to sell the furniture I didn’t want, find a mover for my mother’s antiques and my few belongings, and book passage on the Pia Costa.

The Costas were well known in Rapallo. They had a handsome mansion surrounded by palm trees and umbrella pines and my mother went to their receptions. Since their home port was Genoa, it was logical to sail with them. 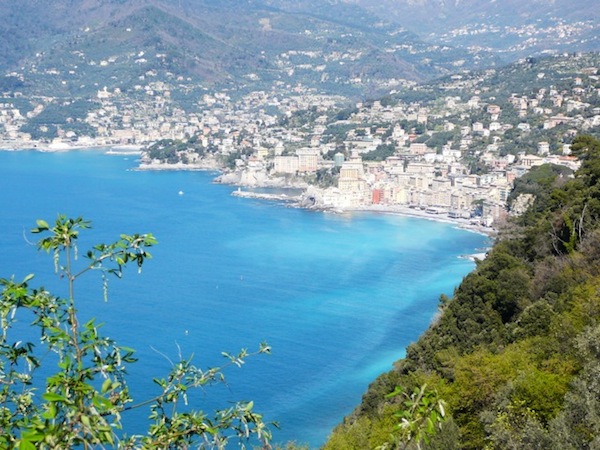 The Italian Riviera—what’s not to love?

My departure date coincided with my birthday. My brother Tom invited me and my two younger sisters to a goodbye/birthday lunch at the 21 Club. I have no idea what we ate, but the champagne was bubbling freely and I kept postponing my leave-taking. The boat would sail with the tide, much later.

But I had not reckoned with my older sister and her husband, who were waiting at my empty apartment on the West Side to drive me down to the docks. Paul was not a patient man, and his patience evaporated altogether when he had to go too long without a drink. So, while I’d been at 21, he’d been downing shots at a bar on Broadway.

He was obviously plastered by the time I walked in the door, accompanied by a college friend, Jake, who’d come to see me off. Paul’s usual aggressive manner rose to belligerent when he saw us, and he hustled me and my baggage into his car, scolding all the while. My sister and Jake followed without a sound though, once in the back seat, Jake and I happily ignored his rants.

We got to Brooklyn in one piece. Cargo boats did not leave from the Hudson River terminals but from decidedly seedier docks on the “wrong” side of New York harbor.

Still fuming, Paul leapt out of the car and started removing my heavy suitcases. He refused to let Jake help and, before, we could insist he share the burden, Paul was staggering up a very steep gangplank. He lurched from side to side, listing ominously under the weight of the bags.

By this time, Tom and his wife had arrived as well and we all stared in disbelief. It was obvious Paul was never going to reach the deck . . .

. . . and so, before our very eyes, he plunged into the gap between the boat and the dock, bounced off a first aid kit and into the filthy water. (My suitcases slid down the gangplank back to terra firma.)

As Paul floundered in the water, he started shouting—still pissed as a newt—“Goddammit, Tom Farr! Why did you put your sister on this wop tub and not the Queen Elizabeth! I’ll sue you, I’ll sue the captain, just you wait!”

Somehow, his flailing brought him close enough to the dock for a longshoreman to haul him out. (Later we found that he’d hauled off his gold watch at the same time.)

My next memories are somewhat hazy. I think an ambulance must have screeched in to take Paul to the nearest hospital (where he was treated for seven broken ribs but survived, his drinking arm undamaged—he died of cirrhosis several years later). My sister, naturally, went with her husband, while Tom, his wife, and Jake settled me into my cabin.

The boat did not in fact leave until around midnight, and I said goodbye to the Statue of Liberty, thinking that very few people can have been sent off with such fanfare.

The next day, I met my fellow passengers. There were twelve of us, but I only remember a few. Most comical were the pint-sized Texas millionairess of a certain age, whose tiny feet didn’t reach the floor when she sat in a chair, and her toy boy of half that age, who wore cowboy boots and a string tie for the whole voyage. The quiet and mousy librarian fitted the stereotype of her profession; the two Italians spoke little English; so, for company, I bonded with a gay couple.

Talk about six degrees of separation—one of them, Ed Norris, was the brother of a friend of my father’s. Much later, I learned from his nephew that they used to call him “Aunt Ed.”

Aunt Ed and his partner took me under their wings, making solicitous visits to my cabin for several days, when mal de mer laid me queasy-comatose. They brought me copies of Screw magazine, and told me all sorts of dirty jokes and libellous gossip to cheer me up.

After a few days, either the waves stopped rolling or I got my sea legs. Nausea under control, I joined the boys in endless walks around the boat, admiring the turquoise Gulf Stream cut through the greeny-black Atlantic, and loitering in the kitchen with the cockroaches and the genial chef. I still did not have much appetite, but recall that our meals were quite conventional: pasta with meat sauce, veal with tomato sauce, and the like.

In short, I discovered that the much-touted romance of a cargo-boat voyage fell short of expectations. In fact, it was rather long—ten days to Barcelona and another four to Genoa—and pretty ho hum.

By the time we got off at Barcelona, I could hardly walk. Had to hold on to Aunt Ed and his buddy to move without tottering. Sea legs were no good on land.

Finally, we tied up in Genoa’s old port and my mother came to meet me with a small van. I think she was more excited at the prospect of seeing her precious antiques than me. I watched her smile fade as she opened box after box. The first ones were mine and out tumbled my LPs, old copies of Gourmet magazine, and my set of Revere ware.

“Is that what really matters to you?” she said accusingly.

Thus the voyage ended and a new life began.

Note: My heart goes out to all the families involved in the Concordia tragedy, passengers, crew and ship owners. 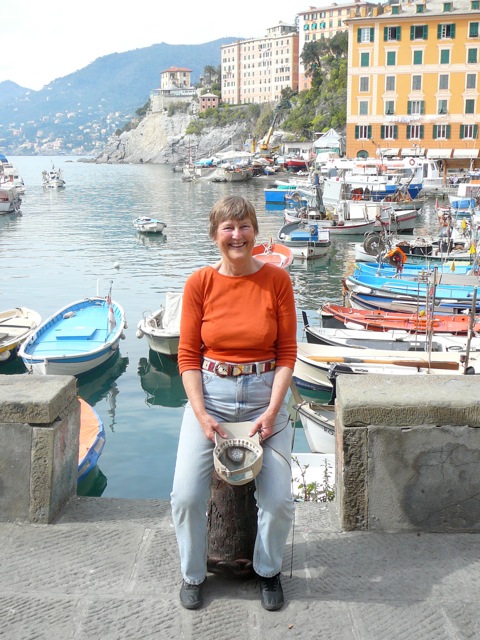 Revisiting the Riviera in 2008, another of my homes.

I always keep several pots of basil, large- and small-leaved, on our Andros (Greece) terrace and I pillage them regularly for salads and sauces. When the weather changes and summer is finally over, I strip them and make jars of pesto to get us through the winter. They are never enough. I like to add it to vegetable soups, spaghetti sauces, and shrimp and squid dishes like the one below by Athens’s foremost seafood chef/restaurant-owner and cooking-show-host.

Wondering why Genoese basil always tasted better than what I grew, I once asked a local supplier. She told me that basil prefers shade to sun, that too much sun destroys its flavor and makes it tough.

I have attempted to make pesto with a mortar and pestle, but with pine nuts flying round the kitchen and leaves that took hours to become paste, sticking the ingredients in the food processor makes more sense:

First I process the basil leaves gradually with salt and some of the oil, then add the cheese and more oil, then the pine nuts, so there’s a little crunch. If I’m going to store it for the winter, I don’t add the garlic until I use it, since garlic doesn’t “age well.” Put in clean jars, cover with oil, and keep them in the refrigerator.

Lefteris Lazarou’s Squid with Pesto Sauce, as served at Varoulko, one of Athens’s top restaurants, where I watched him prepare this easy dish.

Take a non-stick pan, get it hot, add a tiny amount of olive oil and the cleaned, fresh squid, cut in rounds, and fry stirring over high heat for about 5 minutes (Lefteris would flip them). As it cooks, the squid will release a lot of liquid. As it accumulates, pour it off. Now pour in some ouzo and deglaze the pan with it. Pour the liquid off again. Stir in the pesto, toss the squid in the pesto, and there you are. Lefteris serves this on a nest of vermicelli-size fried potatoes.

When I had this the first time about ten years ago, I thought I’d died and gone to heaven.

4 Responses to Sailing With The Costa Line, 1971