Another Day That Will Live In Infamy

“Because I knew all this, because I’ve seen what villains of Trump’s ilk can do, because I know that creatures such as he attract followers of the vilest levels of humanity, and fools who will believe lies, and because I also knew that our government was replete with the former, I descended into a depth of silence and waited. Just as I waited with my mother in the basement of our house in Shanghai when Mao’s bombs exploded overhead in the middle of the night.”—Helen Noakes 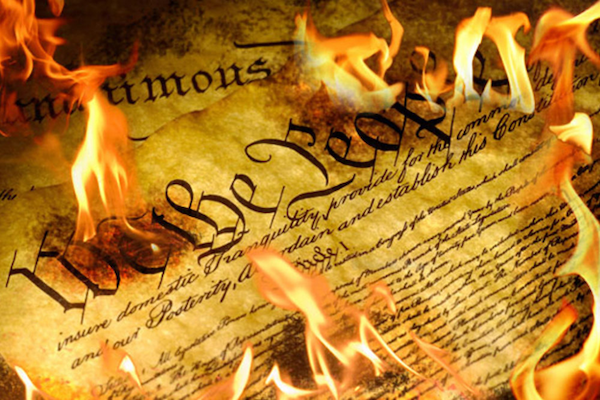 “[E]ternal vigilance is the price of liberty . . . . We see ourselves as a city on the hill, a stronghold for democracy, looking for threats from abroad. But the sense of the saying was entirely different: that human nature is such that American democracy must be defended from Americans who would exploit its freedoms to bring about its end.”—Timothy D. Snyder, from On Tyranny

SAN FRANCISCO California—(Weekly Hubris)—November 1, 2021—January 6, 2021: a day like any other; a morning like all my other mornings. I wake to a riff of Mozart’s Piano Sonata No. 16 in C Major, my setting for an alarm clock that serves only as an affirmation, since I always wake just before the melody. I don’t turn the alarm off because the music is such a delightful start to the day.

My early ritual never involves the intrusion of a newscast. I don’t want to disrupt my “morning mind,” a term I’ve borrowed from a fellow writer. It’s the mind set just after waking when the creative subconscious is in perfect harmony with the brain’s conscious machinations, urging me to write. How long I’m immersed in that flow depends on what I’m accessing in that treasure trove of memory. It depends on how in love I am with the characters, the words, the world I’m creating.

This morning, it’s a love fest. I write until noon, when I realize the coffee has all been consumed; the delicious bitterness of it on my tongue, almost gone. I have a “must do” list that begins nagging at me.

Reluctantly, I concede to my inner task master. Mumbling something about the daydream of having household staff free me from the mundane chores of living, I remind myself that until and unless I win the lottery, that staff will never materialize. And, because household chores bore me, I turn on CNN loud enough to be heard in the kitchen of my small house.

At the sink, I leave my dishes and rush into the den to stare at the TV. Something the newscaster says draws me there, and when I see what it is, when I hear the howling mob, I freeze.

My heart pounds, and it’s only when I feel the tears streaming down my cheeks drip onto my neck that I realize I’m sobbing uncontrollably. It’s that realization that triggers the scream. Once I start screaming, I can’t stop. The force of my cries rips at my throat. The pounding of my heart reverberates into my head, and I tremble. Something within me, that reasoning self-observant aspect of me, warns me to collect myself, to examine the source of this immense reaction. With difficulty, I calm down, wash my face, drink some water, but I can’t stop weeping.

Why? I ask myself.

Immediately, an image flashes up from memory: my mother and I in a vampatso, (a rickshaw drawn by a man on a bicycle), in Shanghai. Incited by Mao’s rhetoric, an insane mob surrounds us and, screaming obscenities and threats to kill us, rocks the rickshaw, attempting to overturn it. The rickshaw driver saves us. I don’t know how, but I know he pedals us out of danger. I’m four, and I’ve already seen more than some adults experience in a lifetime.

My mind, unable to deal with any more of Mao’s savagery, buries the memory so deeply that it takes the expressions on the faces of the January 6th mob to trigger it.

These so-called American patriots look exactly like the communist mob that attacked my mother and me.

Mao’s message was broadcast through loudspeakers which quickly appeared on lamp posts throughout Shanghai. In loud, barking tones, the speakers informed Mao’s supporters that they were free to do whatever they wished to foreigners and wealthy Chinese. We weren’t wealthy, but we were foreigners and, therefore, sanctioned targets of mob violence.

As I sit watching Trump and his minions whip the crowd into a frenzy, I am sickened by the similarity between Mao’s tactics and Trump’s. The narcissism shared by these two men was the hallmark of every murderous dictator known to history. Mao, like Trump, cloaked his psychopathy in the enormous lie of caring for the welfare of the people he used to achieve his own ends.

On this January day, Trump’s baying goads his swarm of supporters to set upon the Capitol. The sight of the manic glee on his face as he watches his efforts succeed, triggers another recollection: the fate of a Chinese farmer who lived near our house. He and his family worked a tiny farm for decades. He wouldn’t give it up to Mao’s goons because he knew nothing of proletariats or the glories of a communist revolution. On a blanket order from Mao, the champion of the working man, the farmer, his wife, and five-year-old son were ordered to kneel before they were shot through the head.

Ah, these champions of the common man! How marvelously they demonstrate their love! 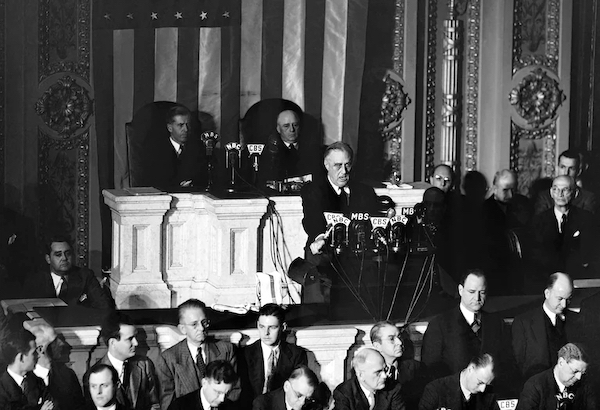 President Franklin Roosevelt speaks to a joint session of Congress in Washington after the Japanese attack on Pearl Harbor, Hawaii, on Dec. 8, 1941. (Photo: Associated Press.)

A thought occurred to me as I watched the maniacal, murderous display of barbarism early this year: January 6th would go down in history as the second day that will live in infamy in our nation.

FDR coined the phrase to describe Japan’s attack on Pearl Harbor which brought the United States into the second world war. On January 6th, the enemy was foreign as well. With Trump as his henchman, how delighted Mr. Putin was to see his hated United States rip itself apart without putting a single Russian in danger. How easily the American fools were to fool; fooled by the biggest fool of all, whose cunning Mr. Putin so expertly augmented. The manipulator was manipulated, and we are still trying to fight off the horrors he wrought.

Because I knew all this, because I’ve seen what villains of Trump’s ilk can do, because I know that creatures such as he attract followers from the vilest levels of humanity (and fools who will believe lies), and because I also knew that our government was replete with the former, I descended into a well of dark silence and waited . . . just as I had waited with my mother so long ago, crouching in the basement of our house in Shanghai as Mao’s bombs landed overhead in the night.

I’ve thought long and hard about sharing this with you. My decision to do so was spurred by hope that if you read of a personal experience relating to terrorism, you might be driven to act. I also wanted to explain why I have been silent on “Weekly Hubris” for so long: I simply couldn’t write.

To be specific, I wrote, but I couldn’t bring myself to write this column. I wrote of other things, all the while my mind churning with fear, with fury, with hope against hope that Americans would rise and kick the bastard the hell out of office. And we did.

But don’t be fooled. Please don’t be complacent. It’s not over. The terrorist that is Trump has not been neutralized. He continues to work hard at seeing to it that our Constitution is burned, and that iron-fisted fascists like himself take control of this country.

Until and unless our government deals forcefully with everyone who was involved in this terrorist act—EVERYONE—we are in danger. When I say government, I don’t mean only the people in our capital, I mean all of us. Ours is a “government of the people, by the people, for the people,”* and if we don’t do everything in our power to excise terrorism from our midst, the United States shall perish from the earth.

*“. . . that these dead shall not have died in vain—that this nation, under God, shall have a new birth of freedom and that government of the people, by the people, for the people, shall not perish from the earth . . .”: President Abraham Lincoln, “The Gettysburg Address,” November 19, 1863.