“I love this part of the season. The distortion in today’s schedule, a natural result of the league expansion, means that, often, crucial playoff series are played in weather better suited to football, and the death of a hope-and-dream-filled season occurs in bitter cold, a foretaste of winter instead of a culmination of summer glories. But, for the moment, the sun is shining, the evenings are brisk rather than punitive, leaves turn, even here in lotus land, and fans in Oakland and in my home town, Chicago, check standings, make the ancient signs against evil, pour libations, and hang on for the ride.”—Jean Carroll Nolan

SEASIDE California—(Weekly Hubris)—October 2018—As I write this, on Monday, September 24, the Oakland A’s, my beloved baseball team, sits in second place in the AL West. Their performance in the first bit of their season, like the lot of the policeman in “Pirates of Penzance,” was not an ‘appy one, though signs of life were perceptible in the two or three weeks preceding the All Star Break. The campaign opened in gloomy awareness that we had finished dead last in our division for three disheartening years in a row, and attendance on opening day demonstrated just how discouraged fans had become, registering a dismal 28,000. Baseball people predicted a better outcome than weary, heartsore fans anticipated, although, as is usually true, Oakland had vivid and talented players, flying completely under the radar in this smallest of small markets.

Since the break, however, the team has been hot, and today boasts a 94 – 62 record, good only for second against the juggernaut Astros, but still reflecting a .604 winning percentage, and, (please, powers that be), a shot at home field advantage in the wild card battle with the Yankees. Khris Davis, whose nickname is Khrush, in honor of his power, which is impressive, just hit his career best 45th home run of the year, cementing a franchise record three consecutive seasons with 40 or more dingers. This feat places him in the excellent company of, among others, Alex Rodriguez, Babe Ruth, and the hero of my North side of Chicago youth, Ernie Banks.

You won’t see Khrush on Wheaties boxes (that small market thing), but his flair and line drives delight my soul. He is 30, but plays with the exuberance and verve of a superb 12-year-old athlete, saluting as he rounds third after another tape measure drive, and wearing the A’s logo, yellow on green, in place of conventional eye black. The bullpen has been doughty, the starters show flashes of brilliance, and the fielding is consistent. The Coliseum is rocking again, drums pound, signs proliferate. Now, we must confront the angst of being competitive.

I love this part of the season. The distortion in today’s schedule, a natural result of the league expansion, means that, often, crucial playoff series are played in weather better suited to football, and the death of a hope-and-dream-filled season occurs in bitter cold, a foretaste of winter instead of a culmination of summer glories. But, for the moment, the sun is shining, the evenings are brisk rather than punitive, leaves turn, even here in lotus land, and fans in Oakland and in my home town, Chicago, check standings, make the ancient signs against evil, pour libations, and hang on for the ride. (I think my babies need another year or so to completely gel, but I lie awake at night, fretting over a personal nightmare in which the A’s and the Cubs play. I would cheer for the A’s, but my heart would hurt.)

I feel very sorry for those who have not discovered or embraced the strange, often ponderous, occasionally ecstatic discipline of “the summer game,” as Roger Angell calls it. There is a joy in it, even in its much criticized slow pace. It is impossible to rush a baseball game, and, having no time limits, a game could, in theory, go on forever, a conceit explored deliciously in Kinsella’s The Iowa Baseball Confederacy: A Novel. National League fans carp about the designated hitter, American League fans ridicule the usually futile swings of NL pitchers, everyone has different ideas about strategy, and only occasionally will there be a consensus on MVP, Gold Glove, or Cy Young awards.

But that is the beauty of the exercise. There are games within games within The Game, and it is only rarely that one watches a contest, regardless of outcome, in which an amazingly difficult play is not turned with skill and panache, a slugger fails to lift the roof off a stadium with a shot off the end of the bat that improbably lands in the second deck, or a pitcher does not manage to confound an equally famous batter with a slider on the corner just out of the zone for an inning-ending K. Baseball makes our hearts sing, and eats our souls, and gives us, all summer, the felicity of caring passionately about something beyond ourselves, about something that is not fatal, world-ending or dangerous, but which yet compels our attention and our love. 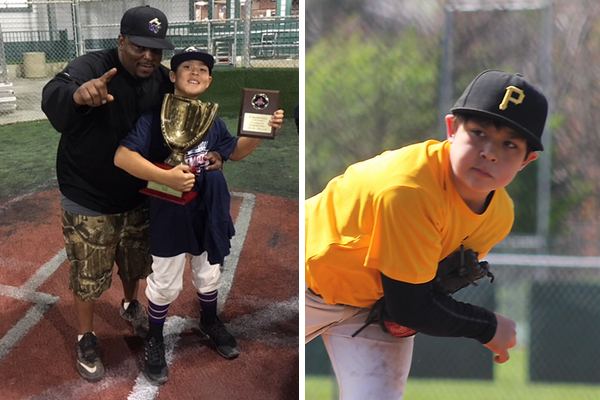 My grandson, Brody, is, at nine, a veteran of three or four seasons of youth baseball. This summer, he played on three teams, including an All Star nod and several travel ball tournaments, one in Florida. I never really follow babyball stats, but he can hit. He has played third base and right field, pitched, and is an impressive young utility player. He has had an up and down season, but still has only failed to put the ball in play in one game.

I never see him play, because grandparents, or at least these grandparents, are a jinx, but he plays catch with me, (being careful not to overtax what he endearingly calls my fragility), whenever we visit. We talk and watch baseball, as we have since he was two. We play a game called pie-in-the-face, (no; not real pie), and do a post-game interview shtick, wherein I am the news person, and Brodes stands in as Khrush or Matt Chapman. We both find these diversions hilarious and hopeful, in good times and bad.

When Brody’s dad, Daniel, was in high school, he was studious, hardworking and altogether the son of whom any mother would be proud. But, even the best and most patient kid goes through the developmental stage where almost everything a parent says is, at best, irritating and ridiculous, and at worst, offensive and insulting. When my adored son and I could not speak to each other about much of anything without pushing buttons, baseball was our safe zone. The A’s were always there, waiting for us to celebrate, grieve, and support.

In 2002, our boys pulled off a marvelously exhilarating 20-game winning streak. Dan attended several of the contests, including the 20th game, calling me at the end so I could hear the Bacchic ecstasy rolling over the field. It was painful but entertaining, an unevenly played, lunatic battle, in which, if memory serves, the A’s waltzed out to an 11- 0 lead. Before an increasingly anxious home crowd, they then watched the Kansas City Royals clamber back, shockingly, to tie the game. Eventually, Oakland won, in cinematic style, on a walk-off homerun in the bottom of the ninth, smacked by a relatively unknown veteran infielder, pinch hitter Scott Hatteberg.

This is the stuff of legends, and a lesson in life and mythology. The character Everyman, standing in for all of us, strikes the epic blow, and gives our side the victory the multitudes crave. The difficulty of the undertaking is what makes it magical. The percentage of youth baseball players who play in high school is small, in college, even smaller. A relative handful of those will be signed by a major league club to a minor league contract, and a tiny group will actually emerge, following a Darwinian struggle for survival, to walk on the hallowed grass of a major league ballpark.

But, here’s the thing. The game is constructed in such a way that its skeleton is recognizable at every level from eight-year-old Mustang ball to professional playoffs. It has form and foundation and solidity. It is physical in the extreme, yet contemplative, wrapping mathematics and grace up in a parcel. It is the dreadful moment when your team drops out of contention, leaving a world of color and light suddenly dim and silent. It is also the moment when, in the damp and chilly evening air of the Oakland Coliseum, Khrush swings, makes contact, and circles the bases, while the fans go nuts, the drummers torment the night, and an atavistic roar rises toward the stars. Then, the excellent sound system rocks us all out with Kool and the Gang’s “Celebrate,” and we go home happy.

PS As I was finishing this column tonight, my A’s clinched a wild card berth. Now we play for home field. Deo gratias.

Regarding the Images: The first photo is of Khris Davis, from the “San Jose Mercury News”; the others are of Brody Nolan, taken by the author’s son, Daniel Nolan.