WEBSTER New York—(Weekly Hubris)—12/19/11—The Card had been damaged AGAIN! Something had to be done. The Card must be protected, restored, preserved as the sacred relic it is.

In the past, there had already been incidences of damage to the hallowed card.

The first act of desecration occurred in 2008, when The Card returned from North Carolina . . . folded so that it would fit into an inappropriately-sized envelope! Folded! 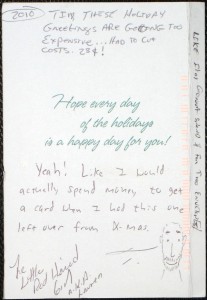 Then, two years later (in 2010), in order to ship the card from North Carolina using the low $0.28 post-card rate, the sacred card was again desecrated. This time it was . . . cut in half!

To the right is a picture of the disfigured treasure.

And there is absolutely no truth to the scurrilous rumor that I sniggered at this gesture of frugality (one of my own sacred principles) when the sadly halved now-post-card was received in 2010.

There was obviously a clear and present danger from weapons of mass Christmas card destruction somewhere in North Carolina. Even a sternly worded reprimand from the UN Security Council was not going to be enough to stop this vandalism.

I am not pointing fingers or implicating anyone with the initials K.L. in North Carolina; just saying for the record that steps must be taken so that this sacred object is better protected from damage while in North Carolina. 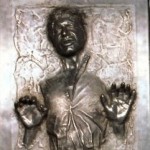 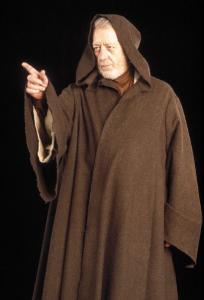 I called Obi-Wan (I have him on speed dial) to get the name of a local Carbonite dealer. Obi told me, “The Ewoks got their underwear all in a bunch about the intergalactic labor laws. They are ticked off about the minimum height requirement. . .,” or something to that effect. Whatever. 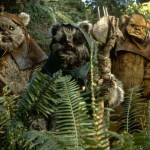 Apparently, Ewoks can get nasty. Obi added, “The fuzzy, little, foul-mouthed bastards are on strike and disrupting interstellar commerce.” 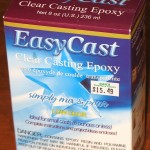 The result is that there is no Carbonite within 25,000 parsecs of earth.

My solution for an earth-based tamper-resistant barrier for the sacred card was to be clear epoxy. I would need a mold for the epoxy cast. And, of course, it had to be cheap. (K.L. and I have that trait in common, if no others.) 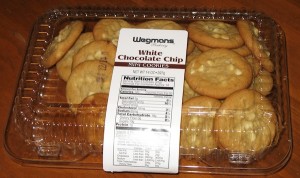 I found the perfect mold at Wegman’s supermarket: a cookie container. It was the correct size, was smooth on the inside (no molded lettering), and when the cookies are purchased, the container comes along free. I could pour the epoxy into the mold made from the re-purposed cookie container top, and then add The Card. When solidified, the epoxy-encased card could be popped out of the mold. 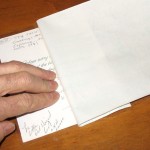 Since the epoxy starts out as a watery liquid before it solidifies, I needed to make The Card watertight to protect both ink and paper. I sealed it in clear, plastic contact paper.

I sprayed mold release onto the cookie container lid, mixed the epoxy resin with the catalyst, and then poured as per the directions. 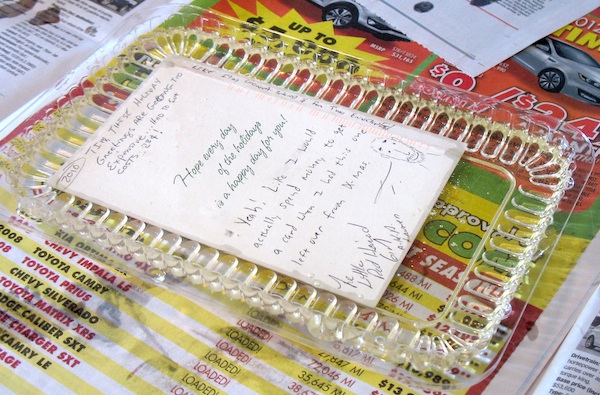 As a reminder to all North Carolinians that utmost care should be taken with the handling of the sacred Christmas object, a little note was inserted into the epoxy before it solidified. 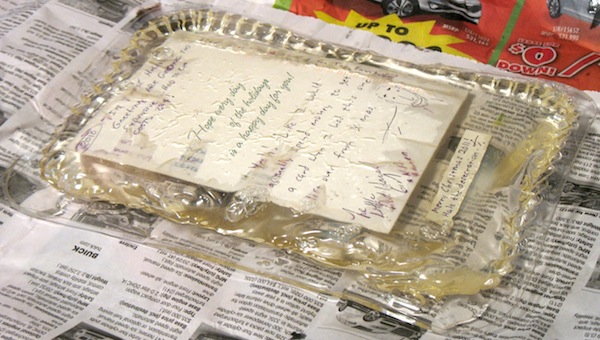 However . . . The Card was successfully encapsulated in epoxy! It was akin to saving The Shroud of Turin from the flames of hell. 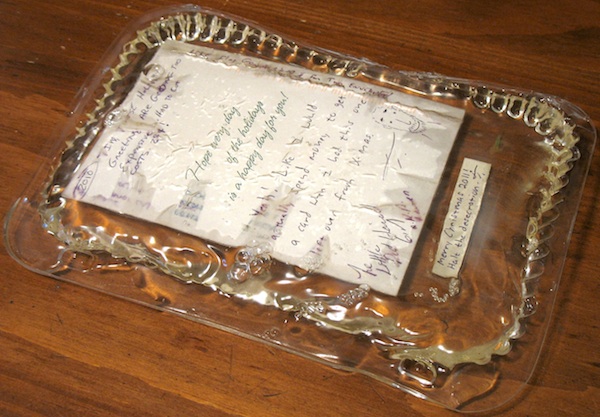 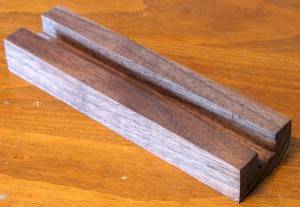 Obviously, this most coveted of Christmas talismans must be displayed for the holidays on a shelf or counter top. Since a post-card cannot stand by itself, I paid a visit to a woodworking friend. Using a piece of scrap (free, K.L., free) black walnut, he created a solid wood pedestal for the now-protected relic.

The Card was then sent back to North Carolina, only a little worse for wear, accompanied by a stunningly beautiful black walnut pedestal. 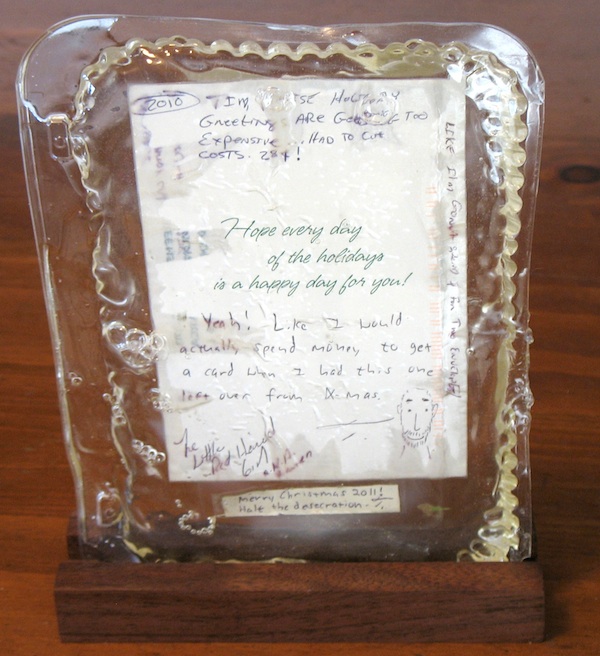 The good news is that the epoxy-protected card is unlikely to be damaged further by folding or cutting after it crosses the dangerous border into North Carolina. Stay tuned for further dispatches.

Tim Bayer, Webmaster, and Assistant Editor of Weekly Hubris, was born and brought up in Webster, New York. He attended St. Bonaventure University, earning a BS in Computer Science, and then worked in the hi-tech world. In 2002 he turned his creative energies to product development and video production with the release of his first independently produced products. When the demand for web site design (TBayer.com) and freelance writing increased, he once again switched skill sets . . . to writing and web work. An avid or, to be more accurate, rabid, disc golfer, he may often be found chasing plastic while in pursuit of the perfect round on a disc golf course, or designing and developing disc golf products for Demogrid.com. He says he tries to find the humor hidden in everyday experiences, because, “life is too important to be taken seriously.” (Author photo by Tim Bayer. Author Head Shot Augment: René Laanen.)
View all posts by Tim Bayer →
This entry was posted in Uncategorized. Bookmark the permalink. Follow any comments here with the RSS feed for this post. Both comments and trackbacks are currently closed.