“In the poem Auden talks about what makes for a good dinner party. The list includes the ‘authentic comity’ of a smallish gathering (‘six lenient semble sieges/none of them perilous,/is now a Perfect/Social Number’), the kids off to bed, and a mix of well-mannered guests who are not bores. Men and women who relish good talk and ‘who enjoy the cloop of corks’ but who also ‘can see in swallowing/a sign act of reverence.’ But the only food actually mentioned in the poem is mammoth-marrow, long pig and pickled Leviathan.” Stefanos Christoforos 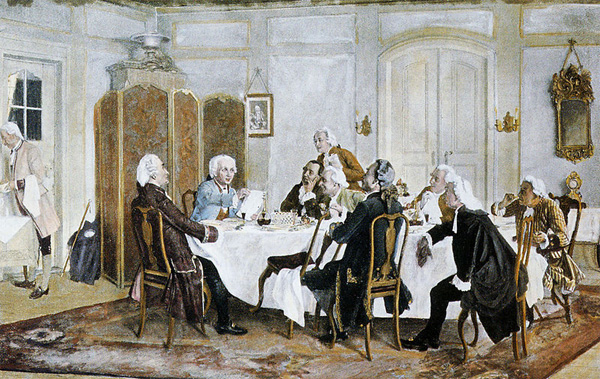 ATHENS Greece—(Weekly Hubris)—6/3/2013—The thought of how best to cook for a dinner party came to me as I was reading Auden’s poem “Tonight at Seven-Thirty.” It is part of the cycle of twelve poems called Thanksgiving for a Habitat that celebrates the house he had bought in Austria and its rooms (the poem in question is of course for the dining room).

In the poem Auden talks about what makes for a good dinner party. The list includes the “authentic comity” of a smallish gathering (“six lenient semble sieges/none of them perilous,/is now a Perfect/Social Number”), the kids off to bed, and a mix of well-mannered guests who are not bores. Men and women who relish good talk and “who enjoy the cloop of corks” but who also “can see in swallowing/a sign act of reverence.” But the only food actually mentioned in the poem is mammoth-marrow, long pig and pickled Leviathan.

Granted, the food isn’t the most important part of the evening. The dinner is a pretext to pamper your guests and celebrate your friendship, but it’s also an occasion to share good food with people who are important to you. Sharing food is laden with social and psychological meaning; cooking for others, which adds the element of gift-giving, is even more complicated, and that’s not even considering questions of skill and technique. The following are more notes to myself than advice, put together from experience (I’ve broken them all at one time or another, almost always to my regret) but also from observing friends who have a talent for making others feel truly at home.

So you’ve found what sounds like a great recipe for butterflied sea bass with salmon mousse in puff pastry. What, you’ve never really made a mousse (much less butterflied a fish)? Now is not the time to try. Something will go wrong. Cook something you’ve cooked before and can cook well. A perfectly cooked yogurt-marinated chicken kebab and an expertly dressed salad is infinitely more rewarding to the palate than a runny, salty crab soufflé.

2) Do respect the dietary restrictions of your guests.

None of your friends who are gluten-intolerant, lactose-resistant, vegetarian, Muslim or allergic to shellfish would expect a meal served at a dinner party to be wholly designed to suit their own dietary needs. But it’s just good manners to ask (if you don’t know) about possible food restrictions and ensure that there’s at least one dish that is free of whatever it is that sends your food-challenged friend into anaphylactic, gastrointestinal or ethical shock.

. . . or, in general, foods that are slimy, unidentifiable, require too much work to eat, or in any way comprise an acquired taste. It’s a good bet that most of your guests have not acquired it. Save your passion for kidneys or habanero chilies for a tête-à-tête dinner with a fellow aficionado.

Relax. Dinner with friends is not an audition or talent show. The country may be looking for the next culinary superstar but the odds are they’re not looking for him in your kitchen. Even slimmer that they’d find him there. The food is important (it’s dinner, after all) and you’ll want to do something special (it’s not every day you invite your friends for dinner) so you won’t want to serve meatloaf (unless, of course, you make a remarkable meatloaf or meatloaf is the only thing you do well), but the food is not the only reason, or perhaps not even one of the most important reasons your friends have gathered at your home. Besides, there are plenty of other ways, more subtle perhaps, like the notes of a flute in an orchestra, to mark the evening as a celebration. A stack of freshly laundered hand-towels in the bathroom, a fine post-prandial grappa, candles of course.

The dinner party, of course, is an instance of those social exchanges which shape others’ perceptions of our hospitality and generosity, so the choice between meatloaf and porterhouse isn’t inconsequential. As David Sutton writes in Remembrance of Repasts: An Anthropology of Food and Memory (some of which deals with customs on the Greek island of Kalymnos), food exchanges generate a social (and, hence, remembered) narrative that make or break a person’s standing in the community: people remember meals. I recall the first meal I had at Giorgos’s new apartment, and the exquisite roast potatoes he cooked. I remember nibbling Sofia’s baked ham on the verandah of her home below the Acropolis in the Plaka, M’s kreatopita, Nikolas’s apple dessert, Adrianne’s lentil salad, Eric’s homemade bread. But I also remember the way friends cook and not just specific meals, like Sotiris’s by now trademark medleys of intriguing mezedes. I’ve tended to cook in a rather minimalist, cardio-friendly way, a practice that in my early years in Greece I carried over without much thought to the meals I cooked for my Greek friends. Until I heard a friend joke, as we were unpacking the dishes of a potluck beach picnic, “and Stefanos has made a wild rice salad and, let’s see, stuffed artichokes and, ah, some more finetsata anosta (bland but elegant offerings).” Food as memory. I’ve since adapted (somewhat) my cooking to the taste-scapes of my Greek friends.

6) Do think of dinner, not dishes.

Nor is dinner a pentathlon (or triathlon or biathlon) of wholly separate events, but a sequence of foods in which intensity and drama is gradually built up and then released. When planning the menu, think of making love or plot development or sonata form or working out. Only the unwise athlete begins a work-out with interval training and fails to stretch at the end, only a bad lover jump-starts the evening with penetration and turns on his side once done without a cuddle or a kiss, and only an inept cook begins with a meal so rich and heavy that the palate is dulled and exhausted for anything else that follows. Or forgets dessert; or, worse, assumes his guests will bring it.

7) Don’t buy your way out of getting fresh, seasonal ingredients.

Asparagus in January can have a certain novelty value but it smacks of arrivisme and culinary insecurity. It says in effect that you think the appearance of luxury is more important than sensory pleasure. In this case, a dish of honey-drizzled, slow-roasted winter root vegetables, however humble in origin, is a far classier act than the asparagus. Cook honest.

. . . or anything else that tethers you to the stove while your guests are nursing their drinks in the living room wondering when you’ll appear. Unless you have a kitchen staff to do that for you. One of the reasons they’ve accepted your invitation is to see you. The one exception: you’re comfortable with having your guests hang out in your kitchen as you cook. Of course, this presupposes that they’re comfortable with it as well. In the end, though, this guests-in-the-kitchen-while-you-cook thing is very hard to pull off. They’ll want or feel obliged to help, but you shouldn’t really let them. You’re supposed to be taking care of them. And if you can’t make food and conversation at the same time, or make whatever you’re doing look as effortless as folding a napkin or, failing that, at least fun, keep your guests out of the kitchen. Otherwise, your sweating over the stove or grunting as you bone the fish will send a very clear message to your guests: look at how hard I’m working for you, which is why we don’t leave price tags on the gifts we give. This is not to say that occasions for social cooking don’t exist—an extended family get-together, two friends cooking an evening meal together—but these are very different from the dinner party.

Don’t overestimate the skills, time and equipment you have at your disposal. You always have less than you think.

Isn’t that why you invited your friends to dinner in the first place?

Note: To read more of Stefanos’s work, on his own blog, go to http://sxchristopher.wordpress.com/2009/03/29/dont-cook-tripe-for-friends/

Stefanos Christoforos grew up a subway stop from the Christopher Street station in New York’s West Village. Technically, it was “a river and a subway stop” away in Hoboken, New Jersey, a waterfront town that achieved a place in the annals of American song and sport as the birthplace of Frank Sinatra and baseball. He couldn’t sing or swing a bat and had little desire to do either, and thus, freed from the commitments of choir practice and junior varsity, he spent his time exploring, at first his own little square mile of working-class ethnic minestrone and then eastwards across the river to The City, where he discovered there were things he was good at that he didn’t need to practice. Or maybe that the practice was so bound up with passion that it never seemed like work. One of the things he was good at (but actually did require a lot of practice) was languages. Though he studied various things in college and graduate school—political science and city planning and even theology—he eventually wound up spending most of his waking hours working with languages, his own and those he later acquired. It was a bit like the route between Hoboken and Christopher Street: a path waiting to be discovered. He now lives even further east, in Athens, Greece, where he works in the fields of corporate communication and translation. He writes here as an amateur on subjects he cares about: art, memory, language, identity, and increasingly, about politics, the city and the crisis in Greece. Writing about them feels to him a bit like trespassing on other people’s intellectual turf; hence the title, Breach of Close, an old legal term for "breaking a man’s close," to wit, trespassing. Author photo by:Adrianne Kalfopoulou
View all posts by Stefanos Christoforos →
This entry was posted in Uncategorized. Bookmark the permalink. Follow any comments here with the RSS feed for this post. Both comments and trackbacks are currently closed.