“There’s a saying, in the Balkans: ‘Only an onion skin separates one people from the other.’ We are so similar, one to another, despite perceived differences (though our misperceptions are often strong enough to bring us to blows). We are one people, and this is nowhere truer than in the Eastern Mediterranean.”—Alexander Billinis 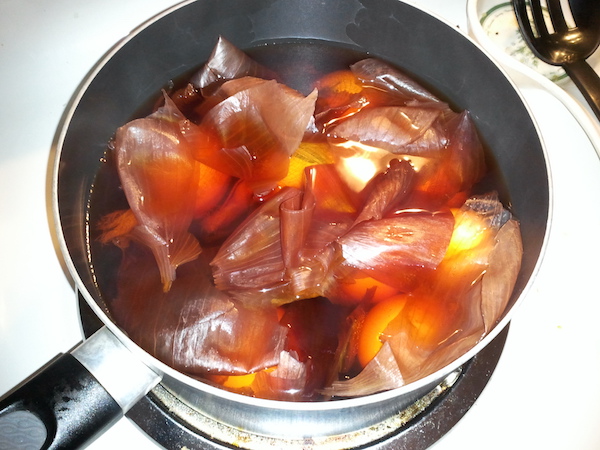 CHICAGO Illinois—(Weekly Hubris)—5/9/2016—It was our first Easter together, and  we had been dating for four or five months. We had met, after all, at church, so it was natural that the holiest holiday in Orthodoxy would be an occasion we would both want to celebrate. As we lived (not yet together) in small apartments, we were invited to someone else’s house, by some Kum or Koumbaro though I now forget who and where.  Never mind, we were planning for the holiday ourselves, intending to keep our Orthodox traditions.

We had gone grocery shopping, and it occurred to me that, along with eggs, we needed Easter egg dye. To Western Christians, both Catholic and Protestant, dying eggs presents no problem, as grocery stores all stock multi-colored egg dyes just before Easter. For those of us who are Orthodox, with a different calendar (who often celebrate Easter a month before or after “Western Easter”), it becomes a challenge. That said, it was Chicago, home to the largest Orthodox population in America, and most Greeks color Easter Eggs “any color you want, so long as it’s red.”

“We need egg dye,” I said, as we walked through the produce section.

My girlfriend (now wife) nodded vaguely before coming to a halt at the onions.

Both of us, and the kids, eat a lot of onions, as they are ubiquitous in Greek and Serbian cooking. As a salad devotee, it is one item that, even in bachelorhood, could be found in abundance in my otherwise often bare pantry. So I was not surprised when Vilma stopped for onions. She took a plastic bag out, dropped in one, or perhaps two, onions, and then proceeded to fill the bag with onion skins, particularly the richer-hued ones.

I rolled my eyes, then asked, “What are you doing?”

She shot me a look of impatience. “Just wait, you’ll see,” she said. Some questions need not be asked, nor some battles joined, to preserve the relationship dynamic, so I held my peace. We moved on, picked up the rest of our groceries, and then watched the check-out lady look at the bag with the onion skins, look at my girlfriend, look at me, then look back to the onions, before shrugging slightly and continuing  to scan the rest of the items. I was still in the dark.

At Vilma’s apartment, she boiled the onion skins, which produced a very rich, earthy, and utterly organic and natural dye. Then she boiled the eggs in the onion-water, and they emerged with a wholesome, utterly natural, woody-red hue to them. They were an instant hit, both with me and wherever we took them, as gifts, that Easter. 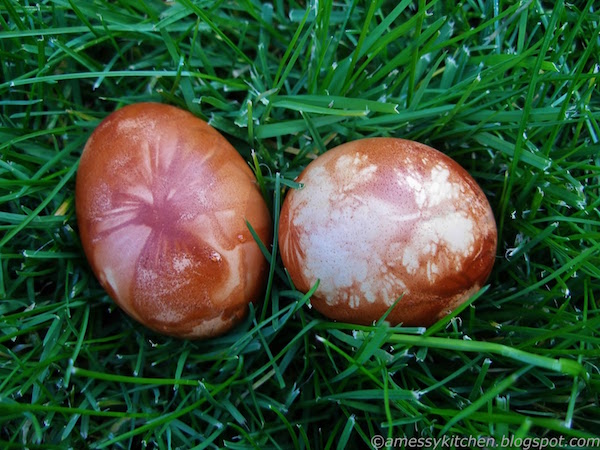 From then on, I did not have to think about dye for Easter eggs: I just needed to stop by the grocery store, fill a bag with onion skins, and endure a quizzical look from the check-out staff. When we moved to Greece, we did the same thing, though some Athenian friends and relatives, so sophisticated at the height of pre-Crisis Greece, laughed at this hoary practice, though my aunt remarked, “Well yes, that’s how we used to do it.”

In Serbia, particularly in the small city where we lived, the practice was more common and, there, it was accepted as a matter of course, with no scoffing: the lady checking out my grocery items or the grandmother selling onions from my favorite stall at the farmer’s open market knew exactly why my bag was full of skins (as well as a couple of onions). The practice simply became one of those traditions that define and enrich a family.

In the course of researching my most recent book, Hidden Mosaics: An Aegean Tale, I sought the assistance of friends and contacts living in Turkey. Among my acquaintances is a New-York-born Greek-American filmmaker, Chrysovalantis Stamelos, who lives in Izmir (known to Greeks, and in history, as Smyrna). Over several Skype and other digitally enabled conversations, I asked about life in Turkey, its similarities and differences to life in Greece.

Stamelos began, “I wanted to dye eggs for Easter and, of course, there was no Easter egg dye to be found in Izmir. So my [Turkish] mother-in-law told me to use . . .”

“Yes,” he smiled through the screen. “How did you know that?”

I told him Vilma’s and my story, and it got me to thinking. There’s a saying, in the Balkans: “Only an onion skin separates one people from the other.” We are so similar, one to another, despite perceived differences (though our misperceptions are often strong enough to bring us to blows). We are one people, and this is nowhere truer than in the Eastern Mediterranean. In dying eggs using onion skins, my friend’s Turkish mother-in-law was drawing upon centuries of wisdom, back to an era when Greek and Turk shared the same space, and learned about, and often respected, each other’s traditions and festivals. The fact that she knew of the tradition, over eight decades since the last Greeks lived in her parts, bespoke a long history of acceptance and respect.

Suffice it for now to say that if an onion skin divides, it also unites!  And what could be more in the true Pascal tradition—really any moral and religious tradition—than that?