Posted by Elizabeth Boleman-Herring on February 20, 2012 |

Note: Elizabeth is recuperating from surgery. This column ran, in a somewhat different form, last year.

“I think the trick now is to do something that’s not just part of the noise.”—Larry Gelbart (Producer of the TV series, “Mash”)

In fact, for about three months there, late last year, Facebook ate my marriage, my Yoga practice, the screenplay I’m working on, my e-mail correspondence, my housework, my homework . . . and my entire head.

Visualize, if you will, a woman sitting at her laptop, or piling stuff into her blender for a smoothie, or walking around the park across the street . . . while, simultaneously, a “Social Media Monster” (supply your own graphic details: enormous maw, never sleeps, omnipresent, probably green and scaly, but somehow exceptionally sexy) swallows her, head-first—and you have some idea how Facebook affected my life in its entirety when I first signed on.

Facebook had my whole head down its enormous gullet . . . and I didn’t even notice. I felt not the slightest inclination to pull back, turn off the computer, get back to the so-called real world of real voices, real people, real objects, real “work.”

I was Facebook’s “creature,” head, line and sinker.

I am not alone. I am anything but unique. I understand that this same thing happens to almost every loquacious, naturally gregarious and extroverted soul who dips a toe into Facebook. (I experienced a similar, thank-God-self-limiting addiction to texting when I first got my cell phone in Greece. Oddly enough, here in the US, I never text but, in Greece, where calling rates are exorbitant and land lines non-existent, texting, say, to your friend on the next island, or your friend on the ferryboat in the harbor, was catnip. It was just so COOL. It was clever, in the sense that the hula hoop was clever, the Walkman was clever, the flash drive was clever.)

For a moment, given the surprising gift of some new technological toy, one feels a bit like God, just after He invented the opposable thumb: “Well, hell, Gabriel! Why didn’t I think of that last week? Awesome!” 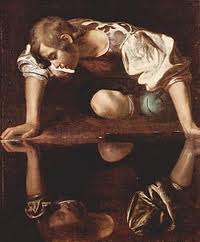 Narcissus gazing at his mesmerizing and unreal reflection.

I’m not saying the thing is precisely like the pool into which Narcissus gazed, fell, and drowned . . . but Facebook (and other social media) can be a reasonable facsimile thereof.

I first signed up and on, despite my sympathy for Cameron and Tyler Winklevoss and a classmate named Divya Narendra (http://en.wikipedia.org/wiki/Facebook), because I had launched this online –zine (www.WeeklyHubris.com) and knew the site would be a perfect medium through which to announce postings by my talented columnists and news analysts (not to speak of my blog-posts for HuffPost).

I did not sign on to find former flames, high school classmates, retired high school and college professors, or former readers of other journals I’ve published, edited or written for over the decades; nor did I imagine I’d discover rich new forums in which to share opinions and thoughts about creativity, faith, baseball, gardening challenges or The Arab Spring—though all of the above, in spades, came to pass.

I launched myself onto the seas of Facebook with a goal in mind, imagining I would be the one “in charge,” the one logging on and off at will, the one limiting my engagement with this Brave New Ocean to, oh, about half an hour a day.

I should have thought back to the Pasadena of 1958 . . . and my first hula hoop (http://en.wikipedia.org/wiki/Hula_hoop).

Nation, it was just a toy. The simplest toy imaginable. A lightweight, plastic tube. My own was forest-green, with a white circumferential stripe, and I mastered the use of the thing, hipless though I was, immediately.

Virtually, I slept in my hula hoop. I was never without it. It probably contributed to my becoming the only rail-thin nine-year-old in Southern California.

So, you see, I have an innate weakness for novelty. Flash a new-fangled, shiny object at me, and all sentient thought goes right out of my vapid little cranium.

Remember, too, that I was brought up a doom-and-gloom Presbyterian (a real feat for parents rearing a child in cloudless, filthy-rich, 1950s Pasadena).

So, unlike Narcissus, I eventually drew back from the social media pool. I established a Sunbeam timer (another nifty little invention) adjacent my laptop, and began limiting my time on Facebook (cracking wise with Emily, swapping Middle Eastern woes with Monster-not-his-real-name, and swapping yarns with Burt and David B.) to one, brief half hour in the morning, and one brief half hour in the evening, if and only if I’d met my screenwriting goal for the day.

I can’t say I don’t still experience the-pull-of-the-new every time I pass my laptop, blinking in my office. But, now, I am back to watching ballgames with my spouse, writing (on the opposite side of my office) The Great American Unproduced Screenplay, and composing real letters and e-mails to old and new friends, far and wide. Not “Messages,” not “Chat,” but actual epistles.

One thing I do know, though: I wish I still had my original hula hoop. Dang thing’d be worth some money today.