Can’t Say As I Ever Did

CARROLLTON Georgia—(Weekly Hubris)—7/18/11—In fourth grade, at South Ward Elementary School in Clearwater, Florida—the school I went to until after my fifth grade year, when my father moved us all to a bigger house in Seminole, some half an hour away—in fourth grade was the Mendel project. Genetics. Monks and sweet peas. The project consisted of this: a worksheet on which each student was to record all the ways he or she resembled his or her parents. On one side was a family tree, with blank spaces for all the salient physical connections. On the other, a list of questions, a breaking down of the body into the parts one might inherit. There was a place for hair and eye color, one for the shape and size of eyes, nose, mouth, hands. A place called “other” for details the student might have noticed but the teacher could not anticipate. 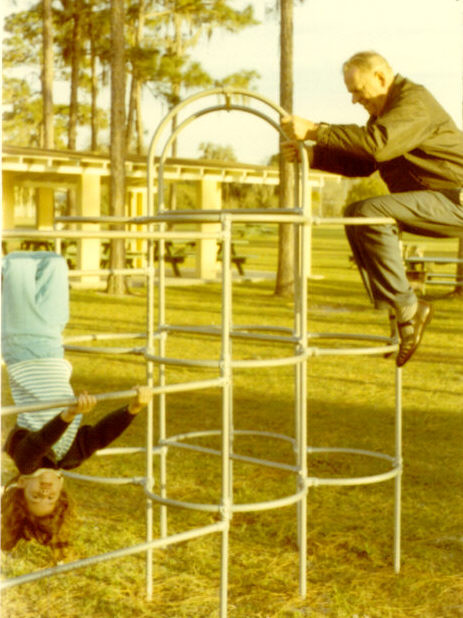 South Ward Elementary is the oldest school still operating in that part of Florida, perhaps in all of Florida. It is made of cinder block and tabby, four stories high, the newer part a single story winging out from behind the asphalt parking-lot that got sticky and stayed that way in the heat from May to November. We took all our classes after kindergarten in the main building, first grade in the basement, the rest rising to the sixth grade in the attic. Gym was either outside or, if we had dance class (we learned the Virginia Reel and other cotillion dances in the second and third grades), we went to the Methodist church auditorium behind the campus.

None of the buildings was air-conditioned. In spring and early fall, temperatures outside could reach a hundred degrees; more insidious was the humidity, which made all the walls clammy and the sweat run out from under my pig-tails and down the center of my back in rivulets that caught sand and held it. Inside, the rooms were warm, but the school had been built by Floridians familiar with their climate. Ceilings stretched higher than a church’s. Windows opened from nearly the floor to the crown-molding. Floors were bare. Children went bare to class, in shorts and tank-tops.

That day, the day on which my fourth grade class began to study genetics by studying their own families, I felt hot. I was in the middle level of the main building, up one pair of broad stairs that opened onto a wide central hall at the top and, at the bottom, the playground with its sand stretches and live oaks draped in gray moss like dancers in tasseled shawls. On days this warm, the heavy green double-doors were propped open and the building inhaled the shade-cooled playground air up the stairs, exhaling it out the roof-panels the teachers used long, steel poles to push open. My classroom lay to the right at the top of the stairs, in the bright sunshine of at least six tall, unshaded windows, also open, and filled with the sounds of traffic and the liquid changes sung by innumerable mockingbirds, endlessly, some perched on the yellow-painted windowsill, some on the stone lintels above them, some on roofs nearby or in the oaks below.

I sat, usually, somewhere near dead-center, my best school-friend Nancy to my left. On this day, the first day of the class on genetics, Miss Jones passed out the worksheet (blue mimeo on milky-white paper, still damp, still redolent), and I knew that something would have to happen. I couldn’t complete the thing. As far as I knew, every feature came to me ex nihilo, as the earth was created, from nothing, since I knew nothing else.

It took me a few minutes to decide whether I would lie on my homework, would take up my black pen and in my then-distinctive back-slanted cursive, looped like a highway, fill in the blanks with details from parents I had made up in my head. Or if I would confess I couldn’t do the assignment and take my punishment. I suppose I was an honest child. All I know is that on this day I told the truth: I was adopted, I didn’t know which parts of me were not my own, but gifts with strings attached and drifting, unseeable, back into the darkest corners of time, back to people dead for centuries, back to people I could only know in pieces by taking myself apart.

Miss Jones walked me without words into the hall. She visited the principal. I saw her with the black phone to her ear, her eyes, dark like mine, under thick brows, pinning me to the chair at the hall table, her head bobbing emphatically to what I imagined must be my mother’s voice, thin and tinny through the receiver. Thus verified, I was given something else to do. I sat all week alone at the long hall table, solid yellow oak and sticky with soft varnish, the door to my classroom propped open, allowing me to hear and see what I could not join. I sat there thinking, dreaming of my birth-mother coming to gather me back as lost lambs are gathered back in picture books, standing beside me there in that draft that came up and up, forever up the stairs, in the light that fell in from the open, tall hall windows, in the sound of murmuring from the other classrooms off the hall, from the women in the offices behind me, from the children at recess playing kickball below.

This column is an excerpt from Emily Hipchen’s memoir, Coming Apart Together: Fragments from an Adoption, which may be ordered through www.amazon.com or by writing the author for a signed first edition through Weekly Hubris (please see Contact page for our mailing and e-mail addresses).

Emily Hipchen has been exiled to many locations, including but not limited to her current one, a small town about 30 miles east of the Alabama state line. She has many day-jobs. When she's not teaching writing and literature full-time, she edits two journals, writes grant proposals, publishes award-winning essays in creative nonfiction (and a book, Coming Apart Together: Fragments from an Adoption [Literate Chigger, 2005]), writes scholarly articles for conferences and publication, and runs an academic program. At home, she’s in charge of the dogs, the cooking (locavore vegetarian), the blogging, and the heirloom-rose-snobbery.
View all posts by Emily Hipchen →
This entry was posted in Uncategorized. Bookmark the permalink. Follow any comments here with the RSS feed for this post. Post a comment or leave a trackback: Trackback URL.