BURLINGTON North Carolina—(Weekly Hubris)—2/27/12—Whan that Aprille with his shoures soote/The droghte of Marche [hadde] perced to the roote/And bathed every veyne in swich licour . . . Than longen my cousin C. B Watson and I to go fishing.

And, of course, since we sneaked away from our fifth-grade class at Deep Gap Elementary School, we’d need to hatch up an excuse for missing a half day of school. 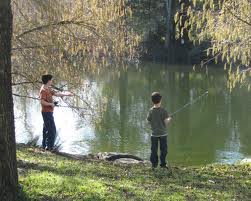 “That should work,” I said, “because kids are always missing school to help with farm work.”

Our excuse worded and rehearsed, we left school at lunch break and hastened to our nearby homes to fetch our bamboo fishing poles and a can of red worms we’d stashed in a rusty Prince Albert tobacco tin, and headed through a wooded area to Gap Creek, about a quarter of a mile east of the school.

We’d fished enough to know the joy of hooking a speckled trout and seeing a flash of silver break through the surface of the creek as the hard-fighting trout could no longer resist our tugs and regain his freedom. Excited by the prospect of experiencing that joy again, we swiftly rushed through the woods to the creek.

Izaak Walton, author of The Compleat Angler (http://en.wikipedia.org/wiki/Izaak_Walton), would have been pleased to know that he had ardent disciples in us.

Beneath a warm spring sun, we ranged down a stretch of the creek flowing through pasture and meadow free of any bramble or briar that might have ensnared our hooks, expectantly awaiting speckled trout, native to the stream, to take a fancy to our red worms. If the still wriggling worms looked inviting to us, the trout had other notions. Not a single nibble did we have. The only fish we saw were bottom-feeding suckers, at which we threw stones, wetting our overalls, socks, and shoes with the splashes we made.

We whiled away time by listening to the stream and by enjoying our freedom from spelling lessons and math problems. Huck Finn and Tom Sawyer couldn’t have had a better outing on the banks of the Mississippi—into which Gap Creek eventually flowed.

If we had had a watch or more skill at reading time by the angle of the sun, our day would have ended far more happily than it did. Our return path led us by Deep Gap Elementary. We thought the school day would be over by the time we emerged from the woods and came to the playground. It wasn’t.

Students were noisily enjoying the final recess of the day, and C. B. and I assumed that none of them would tattle if we were spotted. Our bamboo poles atop our shoulders, we brazenly strode across the school yard and headed for home. But, before we crossed the playground, the principal spotted us. She called to us and said, “I’ll deal with you in the morning.”

And deal she did, perhaps regretting a query she made at the outset: “Johnny and C. B., you know I caught you red-handed when you came back from your little fishing trip. Did you catch anything?”

“No, Ma’am,” we answered together, as we stood guiltily before the whole class.

“Do you know what fisherman’s luck is?” she then asked.

I didn’t but C. B. did, and he blurted out the answer distinctly and loudly. “Yes, Ma’am—It’s ‘a wet asshole and a hungry gut.’” Amidst the mouth-covered laughter of our classmates, the principal’s face flushed redder than a spot on a speckled trout.

I expected her to deal with the crudity of my cousin first, but she turned, instead, to me. “All right, Johnny, I’m going to make you stay in at recess for two weeks and you must write 200 times on the blackboard, ‘I will not skip school and go fishing again.’” I served my time and wrote and wrote until I thought my right arm would drop off. C.B.’s frank piscatorial adage cost him a spanking plus the loss of recess and the blackboard exercise.

If we had not been kept in at recess, I’m sure we would have heard loud roars of laughter as one of our classmates recounted yet again C. B.’s response to boys in the upper grades.

“Did you hear what C. B. said when the principal asked him if he knew what fisherman’s luck was?”

“He didn’t blink an eye and said it loud enough for ever’body to hear: ‘A wet asshole and a hungry gut.’”

“You don’t mean it—he really did?”

“I do mean it. You shudda seed how red her face turned.”

“Yeah, you missed the funniest thing I ever seen. Haw, haw, haw!”

Such was surely the stuff of elementary school humor among all the farm boys in the Blue Ridge. But I’m certain that town boys would have guffawed, too.

I’m also sure that the upright Mr. Walton, The Compleat But Proper Angler, would have been completely offended by his disciple’s coarseness.

One Response to Fisherman’s Luck? Why, It’s Elementary