“’F*#K The Plebs: Let’s Party!’ should be the next election slogan for the Conservative Party in Britain, whether under Dickensian villain George Osborne or Boris the Buffoon Johnson, pig-poker David Cameron having signified that he will not fight another election.”—By Michael House 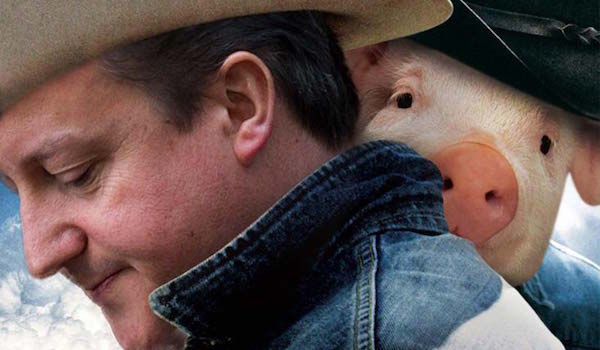 KINGS SUTTON England—(Weekly Hubris)—10/19/2015— “F*#k The Plebs: Let’s Party!” should be the next election slogan for the Conservative Party in Britain, whether under Dickensian villain George Osborne or Boris the Buffoon Johnson, pig-poker David Cameron having signified that he will not fight another election.

Freed from the mild constraints of coalition, the Tories are systematically expropriating the poor in order to benefit the prosperous and to pay for vanity projects like replacing our nuclear Trident fleet and building a high speed railway, at a cost of £50 billion and rising, so that business-people can get to Birmingham from London in 15 fewer minutes.

A prime example is ex-Minister of Justice (sic) Chris Grayling. Fresh from systematically destroying the finest system of criminal justice in the world, he conceived the ingenious idea that criminal courts should make a profit. So he introduced a system of court charges for defendants, the ability to pay being irrelevant, cheaper if you plead guilty, much more expensive if you fight and lose. Inevitably, innocent people will plead guilty because they cannot afford the risk of losing.

Conservatives know the price of everything and the value of nothing.

I am not a vindictive person, but I have to say that it would give me great pleasure if the tabloid press caught Grayling in bed with an under-age hippopotamus.

But all is not lost. The Labour Party, after years of being Tory-lite, have elected a Socialist as their leader, Jeremy Corbyn. An outsider who only qualified for the contest with minutes to spare, Corbyn won a stunning victory with 60 percent of the votes. Predictably, the Right-wing press, aided and abetted, I’m sad to say, by the BBC, has piled shedloads of excrement on his head. But they don’t quite know what to make of this mild-mannered, bearded pensioner who doesn’t wear ties and actually says what he believes, having been a serial rebel on the Labour back-benches for 30 years.

Is he the most dangerous man in Britain? Is he a daft old hippie who couldn’t be elected prime minister in a million years? The gutter press aren’t sure. One new line of attack is that, while Corbyn is a decent enough cove, he is a front man for sinister forces who wish to end civilisation as we know it.

Corbyn didn’t sing the National Anthem at a memorial service, causing outrage among the forelock-tugging classes. This turgid dirge begins with the uplifting line “God Save Our Gracious Queen.” He was accused of a lack of patriotism. Perhaps he felt that it was more patriotic to improve the lot of the disadvantaged in our country, rather than to invoke an imaginary deity to save a lady whose chief virtue is that she was born and has stayed alive, beneficiary of a ludicrous system whereby a family of German immigrants managed to loot the country for centuries and make people grateful to them for doing it.

Even more Moderate are the Conservatives, led by greasy PR man David Cameron, who wants to do to the poor and disadvantaged what he did to that pig’s head at Oxford.

There is a third party, the Liberal Democrats, who hadn’t enjoyed power since 1916 and were eager to jump into bed with the Tories in coalition, and give cover for the Conservatives’ systematic and ideological dismantling of the Welfare State, while pretending that austerity was all about paying off the deficit between income and spending. Happily, the electorate gave the LibDems what was coming to them, reducing them to an impotent rump.

Unhappily, they lost most of their seats to the Tories, giving the latter an overall majority in the House of Commons. Their best hope for the future is to say to the electorate—look at what the Tories are doing: this is what we saved you from during the Coalition.

And that, Children, is the current state of British politics.