BURLINGTON North Carolina—(Weekly Hubris)—1/30/12—No fancy riding habit, no well-groomed steeds, no blast on a hunting horn, no cry of “Tally-Ho” and the sound of galloping hoofs. Barking, eager hounds, yes, but a pack of fewer than a dozen, most of them selected for their stamina, voice, and ability to stay on track.

Clothes? Overalls or work pants, work shirts: light in summer, but flannel or woolen in winter. Pick-up trucks; sleeping bags; cooking gear; boxes or cans of grub; and kindling for a camp fire. Just the essentials. Oh, and maybe a chair or two, aluminum with plastic stringing, for hunters not happy sitting on logs. 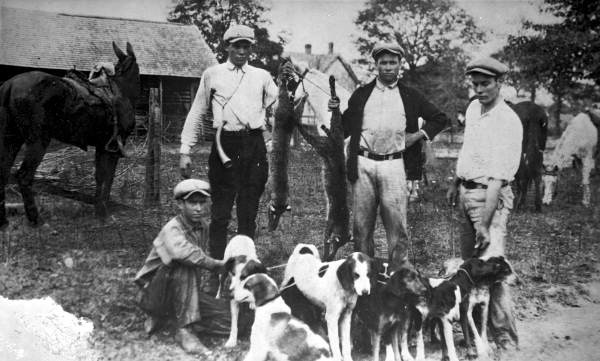 Backwoods fox-hunting in the American South.

No green swards, stone fences, open spaces, and sunshine. Instead, bramble, briars, trees, and moonlight, if the weather is fair. Otherwise, just glimmers of light from a crackling fire where a smoke-stained coffee pot simmers over hot ashes. Little talk, most of it quiet, much of it joshing, and hardly any at all when the hounds strike a track and start yelping.

Obviously, I wish to conjure up contrasting images of foxhunting: the sort involving English aristocrats and squires expensively decked out for a chase across the English countryside; the other, a group of working men, yeomen if you like, engaged in a sport dear to their hearts, one of their shared pleasures being the music of the chase.

It’s the selfsame “music” appreciated by one of England’s greatest men, Shakespeare himself, if Scene 1 in A Midsummer Night’s Dream, Act 4, grew out of The Bard’s hunting experience. In that scene he has King Theseus, in the presence of Queen Hippolyta, say to his servants:

My love shall hear the music of my hounds.

Uncouple in the western valley. Let them go.

Dispatch, I say, and to the forester.

Exit one of the train

We will, fair queen, up to the mountain’s top,

and mark the musical confusion

of hounds and echo of conjunction.

This style of hunting—turning the pack loose and finding a spot to listen to the chase—passed directly down to hunters in the Blue Ridge and Ozark Mountains, and elsewhere I’m sure.

An anecdote shared by an Ozark hunter relates the story of a city boy fresh from a seminary and taking up his first post as a Baptist preacher in the Ozarks. Wanting to get to know members of his flock better, he accepted the invitation of a deacon to go listen to heavenly music on a mountain top.

The deacon, driving a pick-up with a pack of hounds in its bed, stopped by the preacher’s house and then drove to a foot of a nearby mountain. Once there, he unloaded his hounds and said to the preacher, “We must walk to the top to hear the music.”

The preacher didn’t know what to expect, but thought that, perhaps, the deacon had fancied hearing music as winds swept through the trees. That could be considered “heavenly.”

The men made the mountain top just as the hounds struck a track and began barking. The hunter then asked, “Do you hear that heavenly music?”

“No,” said the preacher. “All l hear is that dadburn pack of hounds!”

Not just anyone can hear the music created by a pack of barking hounds. To inexperienced ears, the sounds of a hot chase may come across as just so much frantic barking. While it’s not the Hallelujah Chorus being performed by the Westminster Choir, to veteran fox hunters the music of an exciting race can yield comparable pleasure.

Seated as they are on logs or in rickety chairs, hands cupped to ears, experienced hunters listen for a blend of voices, shrill soprano from young bitches, alto from older bitches, and tenor and bass from the males in the pack. Not low bass, mind you, not Russian-style low bass gained through much training and more than ample glasses of vodka washed across the vocal chords—just something low enough in register to serve as a contrast to the higher-pitched yelping.

The flow of conversation among the hunters might go as follows: “Did you hear that alto as she took the lead? That’s my Mamie and she’s singin’ her heart out.”

“Yes, that’s Mamie, but she’s fallin’ behind Susie, my soprano,” says a second hunter, whose ears tell him that Susie is now hotter on the track then Mamie.

But Susie leads for just a short time before a tenor voice rises above the rest. “That’s Ike, for sure,” whispers a third hunter, “and he’s showin’ them bitches a thing or two about how to track a fox.”

“That well may be the case,” says a fourth hunter, “but I believe you’re mistaken. It seems to me that Ike ain’t doin’ a thing but showin’ his bad breedin’. I think you ain’t got nothin’ but a cutter.” [A dog that cuts away from the pack and heads off on a false track.]

“You know my Ike’s too good a dog to do a thing like that,” replies Ike’s owner. You’re jus’ a joshin’ me.”

The attentive listening and talk goes on until the fox leads the pack beyond hearing. Then the hunters slip away to their sleeping bags, hoping to find their hounds gathered again at the campsite when morning comes.

They love their hounds, treat them well, trade among themselves for a voice they would like for their own pack, exchange copies of Chase magazine, and follow the practice of naming their dogs for whoever occupies the White House, President and First Lady. Of course, there are other names as well, but presidential names rank as favorites.

The hunters may come from the backwoods of the Blue Ridge or the Ozarks, yet they are as proud of their hounds as King Theseus was of his. The music of the hounds binds king and backwoodsman; The Great Bard and The Blue-Ridge-Josher.