“The bird itself is so ancient and regal that its name is probably placed into the modern ‘blue’ spectrum as a courtesy; what we call its color is more like an immortalized patina reeking out from some vast realm between the feathers and bones where a whole lot of hanky-panky evolution took place that never got into the books.”–By Anita Sullivan 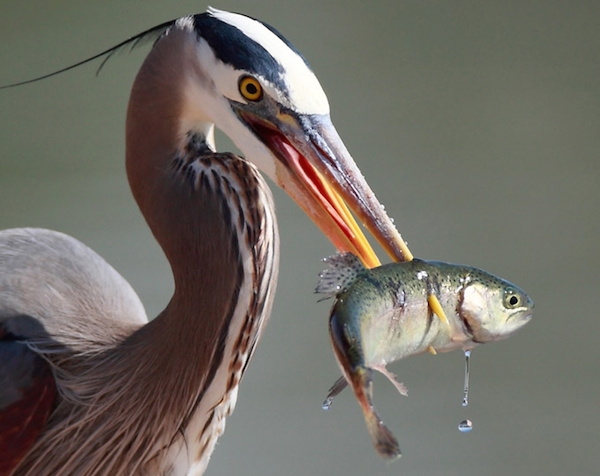 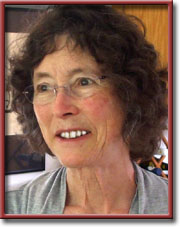 EUGENE Oregon—(Weekly Hubris)—9/29/2014—A few evenings ago around dusk, I looked up and saw a Great Blue Heron in silhouette (well, even when they’re not technically “in silhouette,” G.B. herons look that way, since their qualifying blue is so dark and old it hardly qualifies as a color at all anymore. The bird itself is so ancient and regal that its name is probably placed into the modern “blue” spectrum as a courtesy; what we call its color is more like an immortalized patina reeking out from some vast realm between the feathers and bones where a whole lot of hanky-panky evolution took place that never got into the books), chugging across the horizon towards his lonely night resting place.

These incredibly noble birds are huge in comparison to, say, robins and blue jays and even crows or most hawks—but they don’t command the jaw-dropping attention of golden eagles, magnificent frigatebirds, or storks. Still, even though they’re fairly common in most parts of the US, I will go to my death not ceasing to do a double take of awe and deep joy whenever I see one.

In this case, at this time, a word rolled down the marble-chute of my idle brain: Grandfather. And I stuck out my lower lip as I squinted into the pale sky from which the sun had just withdrawn all its color flags, and watched the almost ungainly progress of the bird into the place where I could no longer recognize its shape.

“What do you mean by Grandfather?” I thought, and shook my head. “If this is a grandfather, he has no grandchildren. Nor is he going to sit and offer counsel to the younger members of his tribe. This person up there rowing along the runcinate line of low hills on my horizon—this guy is a grandfather all right, but not in the usual sense.”

In what sense, then?

He (the heron could very well have been a “she” and thus would merit the term “Grandmother,” which word belongs in a story all its own. But I wasn’t seeing it that way, and I can only tell this story.)

He was Grandfather partly because the bird had no idea that’s what he was. His enormous innocence went along with him like an invisible cloak that had been made larger and larger and larger until it was very like a map of the world as big as the world. But his world. The Great Blue Heron world. He is a bird and very firmly so. But not primarily.

Here my jaw did begin to drop. Yes, this heron is “Grandfather”; I can feel it in his particular silhouette, in his age, in his indifference, and most of all in what he knows that we also know but don’t know that we know. He carries this knowledge with him everywhere. Perhaps this is why he flies so ponderously and slowly and with such archetypal authority that it makes you almost turn inside out when you see him. 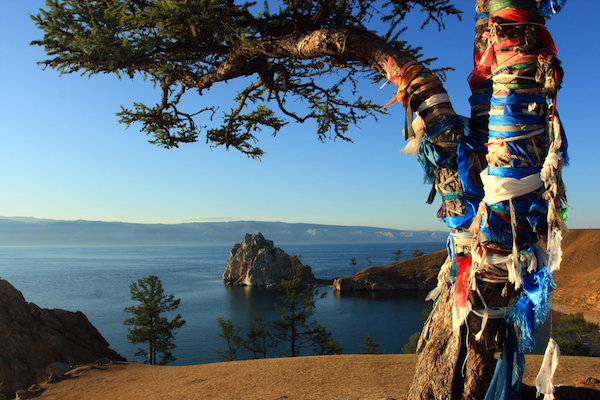 Shaman Tree on the shore of Lake Baikal, in southeastern Siberia.

But we’ve been using the term flippantly all these years. Because the blue heron came first, with his own gradual accretion of survival behaviors and comic redundancies. He evolved from some reptilian ancestor, and was probably closer to it than most (except for storks) birds. Does this in itself make him “Grandfather”? No, of course not. He started small and particular, but he was also—very early on—part of one of those huge word-bundles that ancient people used in their stories, and which we have long forgotten. Single words that mean so many different things that we can’t understand how the word even survived without drowning under the weight. A word like Bayanay, which anthropologist Piers Vitebsky, in his book about the reindeer herding peoples of northeast Siberia, describes as:

“. . . a vast field of shared consciousness which encompassed the landscape as setting, as well as all the human and animal roles in the drama of stalking, killing, and consuming. This state of super-consciousness was so delicate and precarious that when talking of hunting, especially in the forest, one could not refer to animals by their ordinary names. Instead of the ‘crude’ but ‘true’ name kyaga, one referred to the bear as abaga, meaning ‘grandfather.’” 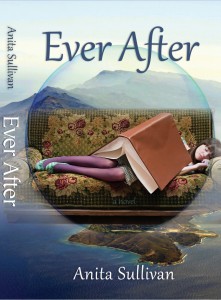 Ever After: A Novel Kindle Edition by Anita Sullivan.

Born under the sign of Libra, Anita Sullivan cheerfully admits to a life governed by issues of balance and harmony. This likely led to her 25-year career as a piano tuner, as well as her love of birds (Libra is an air sign), and love of gardening, music, and fine literature (beauty). She spent years trying to decide if she was a piano tuner who wrote poetry, or a poet who tuned pianos. She traveled a lot without giving way to a strong urge to become a nomad; taught without becoming a teacher; danced without becoming a dancer; and fell totally in love with the high desert country of the Southwest, and then never managed to stay there. However, Sullivan did firmly settle the writing question—yes, it turns out she is a writer, but not fixed upon any one category. She has published four essay collections, a novel, two chapbooks and one full-length book of poetry, and many short pieces in journals. Most recently, her essay collection The Rhythm Of It: Poetry’s Hidden Dance, indulges her instinct to regard contemporary free-verse poetry as being built upon natural proportional rhythm patterns exhibited in music and geography, and therefore quite ancient and disciplined—not particularly “free” at all. This book was a finalist for the Montaigne Medal from the Eric Hoffer Book Award. More about her books can be found on her website: www.anitasullivan.org. The poet-piano-tuner-etc. also maintains an occasional blog, “The Poet’s Petard,” which may be accessed here here.
View all posts by Anita Sullivan →
This entry was posted in Uncategorized. Bookmark the permalink. Follow any comments here with the RSS feed for this post. Both comments and trackbacks are currently closed.