Growing Up with the “Jack Tales”

BURLINGTON North Carolina—(Weekly Hubris)—2/6/12—If an aging memory isn’t too rusty, I first heard my older brother, Jack (short for Jackson), read the story of “Jack and the Beanstalk” when I was a little over three years old. As he practiced the reading lesson, he took particular delight in yelling out, “Fee, fie, foe, fum, I smell the blood of an Englishman!” Of course, I took up the chant, too, and ran about the house imitating him as I didafter he read “Little Orphan Annie,” with its refrain, “And the goblins are gonna get ya, if you don’t watch out!” 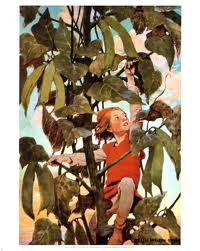 My thespian instincts led to threatening gestures as I tried to scare my cousins, who lived in the same house and often played with Jack and me. As much as I knew how, I tried to be a goblin and, obviously, made outlandish faces, for my cousins high-tailed it back to their side of the house when I recited the James Whitcomb Riley line.

My parents took pride in my spouting of the line, and called me in from play to recite it for kin and neighbors. But I was more taken with the climbing giant and the clever boy than with the goblin: Much as I loved mouthing “fee, fie, foe, fum,” and imagining the crash to earth of the dunder-headed giant, I was particularly impressed by the clever Jack.

When I learned to read, I pored over “Jack and the Beanstalk” admiring, each time I read it, Jack’s tricky ways. By happenstance, I heard other stories about Jack from a neighbor, John Greer, who knew several tales about Jack and his ability to turn adversity and poverty into advantages and temporary wealth.

Frequently, on Saturday mornings, John, a gaunt man with a few tobacco-stained teeth appearing behind thin lips, sat on a nail keg or sawed-off oil drum in the midst of youngsters and adults gathered about him at the Deep Gap Cash Store and told stories—“Lies” according to some of the more literal-minded of his auditors. Tales of clever, tricky Jack kept kids asking for more. Grinning, John would say, “Well, one more and then I gotta go” . . .

. . . whereupon, he would launch into another yarn about Jack, downtrodden, as usual, but successful in the end. When Jack had finally pulled off the trick that reversed his fortune, John smiled broadly, slapped a slender leg with a loud smack and said, “Well, I gotta go, boys.” (In my book, Blue Ridge Heritage, appears a scene depicting John as storyteller narrating the adventures of Jack as hunter.)

John’s store of tales did not fall alone on the appreciative ears of his Deep Gap neighbors. Word of his knowledge of them reached folktale collector, Richard Chase, who came to listen and to record some of them.

Chase was busy at the time in the western part of Watauga County, gathering other Jack tales; eventually publishing a volume of them. He was drawing on one of the richest troves in Southern Appalachia by listening to storytellers in the Beech Mountain community: descendants of Council Harmon, including R. M. Ward and Ray Hicks, the latter becoming the most celebrated of them, especially for his performance at the Jonesborough [Tennessee] National Storytelling Festival. Ray Hicks in action as a story teller appears in YOUTUBE videos on the Internet.

In addition to the Beech Mountain trove, “Jack tales” have been found in other areas of the Southern Appalachia, Tennessee, Kentucky, and Georgia. The westward migration of Appalachian hill folk accounts for the discovery of them in the Arkansas Ozarks by folklorist Vance Randolph.

Once the tales fell under the purview of folklorists and literary scholars, how and where they fit into the cultural history of Scotland, England, Ireland, and Germany came to be questions which, when answered, led to a great many articles and several books.

Were they brought to Appalachia by Cutliff Council and then carried on by his descendants? Were they closely akin to German Marchen? How are they related to other tales about tricksters? How far back do they go, especially if the tale of Jack and the Beanstalk is counted among them? A wide range of answers appears in the Google posting on Jack Tales.

A pleasant discovery of the Google trove regarding Jack Tales is how active schools and communities have been able to spread knowledge of them and transform them into games and dramas. Among the Internet sites are a few videos of performances. One of my favorite sites is JACKtales4stars. It features spirited children enacting several of the tales.

As a teacher, my first year in a classroom with a combination seventh- and eighth-graders in Blowing Rock, North Carolina, I had the pleasure of bringing to class Richard Chase, whom I knew from his programs in Boone, which focused on storytelling and folk crafts. A dedicated promoter of Blue Ridge culture, he was especially interested in whether any students had kin who told Jack Tales. None of them did. But one of the eighth-graders became so engaged by them that he went on, in adult life, to become a storyteller, Jack Tales being among his performances.

As I replay part of my nearly 80 years on a screen now filled with holes and rips, I vividly see, and clearly hear, John Greer on his nail keg in Deep Gap, and now realize how fortunate I was to sit, entranced, at his feet and listen to him tell how Jack used his wits to survive (or briefly thrive).

Through the oral tradition that introduced me to characters, plots, images, and themes, I was led on to literature . . . and the most useful thing I carried away from John Greer was how “to hear a narrator’s voice.” It helped me tune into writers as disparate as Homer, Henry James, Mark Twain, and James Joyce.

The storyteller’s art is one of the wondrous things about well-wrought literature, whatever its provenance.