“We’re here in New York—in awe. And, you know, it is so not the first time for either of us. We’ve both been to NYC countless times, not to mention that my aunt lived with her sister in the Bronx and worked in NY eons ago. Yet, NYC has this way of shocking the crap out of you on the regular.” F. Theresa Gillard 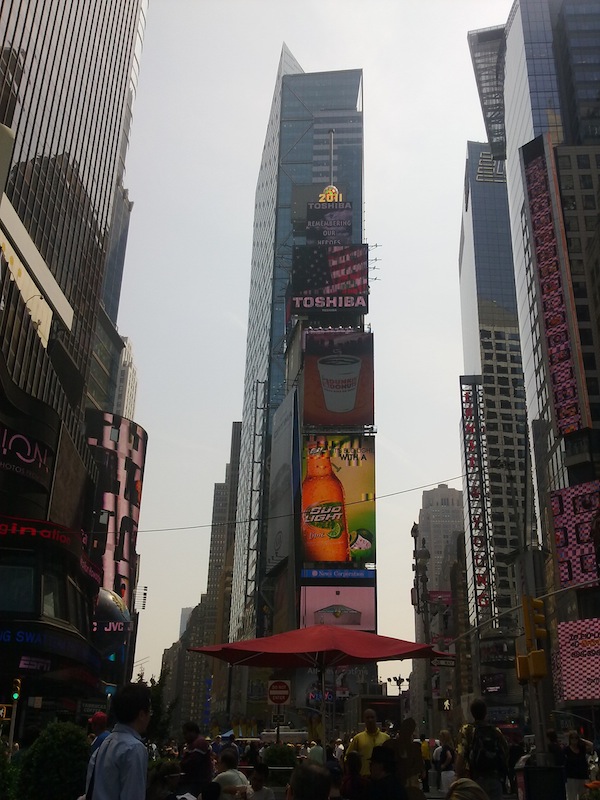 NYC straight-up, with no twist.

Anyways, my wonderful Aunt Corine (AC) invited me on a fun-filled Memorial Day weekend in The Big Apple. Who, in their right mind, would say no to that? And, since I consider myself to mostly be of sound mind (not so much body), she got a resounding, “Yes!”

That being said . . . We’re here in New York—in awe. And, you know, it is so not the first time for either of us. We’ve both been to NYC countless times, not to mention that my aunt lived with her sister in the Bronx and worked in NY eons ago. Yet, NYC has this way of shocking the crap out of you on the regular.

There’re just way too many people, which is generally all I need to know prior to agreeing not to ever be within 100 miles of said populace. Yet, here I am sitting in Times Square, soaking it all in. Way too much overload.

To the right of us is some sort of obnoxiously raunchy music video shoot. These video- (um what to call them, and certainly not video-vixens, because that would be like comparing angels to demons), well, These two are obscene at best. It would not be surprising to any of the onlookers should these two start stripping, not to mention that it wouldn’t take that long to complete that task.

If you’ve never been to New York City, you may wonder what the big deal is. Why are there so many songs that give homage to NYC? Listen, just go and see. Really, before you die and if you never go anyplace else in the world, get your butt to New York City.

And, all of this in this one little block of Times Square. But, let’s back up. We had to get here. From Boston, there are several options for travel to NYC. The quickest, of course, is flying. A shuttle gets you there in well under an hour.

Next, there’s the train. Amtrak from Boston takes four hours or so. Amtrak offers Acela service, which is the fastest way they offer. Not as costly as flying, but it can get up there if you choose Business or First Class, which we chose on the way down. (We had to slum coming back.)

Finally, there’s the bus or driving. The bus is by far the cheapest way to go. Out of Boston, there are several bus options. You can’t beat the price, like $19. or less each way. You could pan-handle your way there and back.

Luckily, my Aunt Corine and I didn’t have to resort to pan-handling, although I hear it’s pretty lucrative. Anyways, our trip to NYC was quite comfy in our facing Business Class seats with a handy table betwixt. We were offered our choice of breakfast, beverages and chocolate to top it off.

Chocolate? This trip was certainly starting off in a stellar way.

We pulled into Penn Station in no time flat (actual time: 3 hr, 25 min), gathered our belongings and made our way to the street level taxi stand, which was chaotic. I mean there was a line, but it was crazy long and some lunatic cabbies were picking up people beyond the end of the line and the like.

Nevertheless, we wait our turn and finally make it to our Times Square hotel, The Double Tree Suites. This place is in the very center of it all. OMG! Like walk out and you get literally assaulted by Times Square. Excellent.

We are greeted at check-in by some warm chocolate chip, oatmeal, and I-don’t-know-what-else cookies. The cookies are individually wrapped and flat-out delicious. More chocolate? Bring it on! There’s also a very nice and attentive Double Tree guest services rep.

We have double beds and a separate living room. Comfy. This is gonna be a great trip. Wait, it’s already a great trip!

NYC Travel Tip #1: By golly, if you’re gonna stay in Times Square; make sure you demand a hotel room with a Times Square view. Unfortunately, we did not do this. We had a view of . . . other buildings . . . one of which was reflective, so I could sometimes see a reflection of the Time Square’s lights. Keep in mind that Times Square is always lit. I’m not sure how it could get any brighter. 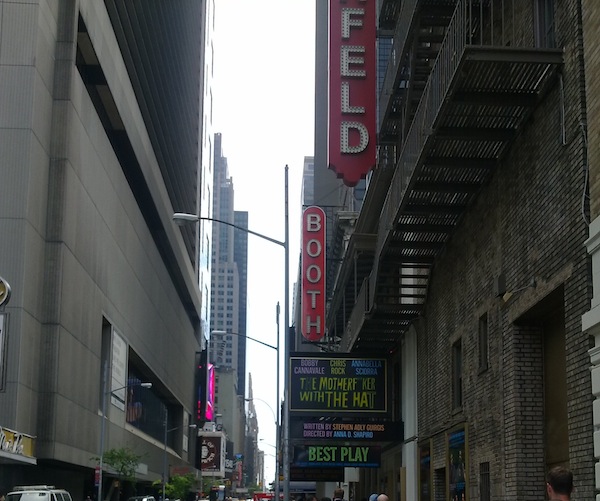 Chris Rock, plus hat, at The Booth.

OK, let’s get into our NYC activities. First and foremost, we have reservations for some French fare at Daniel. This place ranks tops in AC’s Zagat guide. We’ll see about that. Next, we are, of course, seeing a play, Chris Rock’s The Mother&^%#er With the Hat.

NYC Travel Tip #2: You absolutely must see a Broadway play whilst in NYC. Seriously, don’t leave without it. For real. Sell a relative to pay for the tickets, if you must.

Along with our play, we’re doing a post-theater dinner at The Modern, an American/French restaurant on West 53rd. Betweenst, we’ll be doing a NY City Tour and . . . shopping.

For now, we’re just sitting in Times Square attempting to adjust to our environment.

Man! Just when you were getting into it, this turns out to be an F. Theresa Two-Parter. Hang in there. More NYC to come . . . .

6 Responses to Half of F. Theresa’s Excellent NYC Adventure