Have Trumpet, Will Travel (& Travel, and Travel)

“In a highway service station/Over the month of June/Was a photograph of the earth/Taken coming back from the moon/And you couldn’t see a city/On that marbled bowling ball/Or a forest or a highway/Or me here least of all/You couldn’t see these cold water restrooms/Or this baggage overload/Westbound and rolling taking refuge in the roads” —Joni Mitchell, “Refuge of the Roads”

LONG ISLAND New York—(Weekly Hubris)—5/9/11—My name is Hardin. I am addicted to the road.

By the time people read this, it will have been 17 days since my last fix, a hit-and-run ride from State College, Pennsylvania to a hotel near the Newark airport. I can still smell the diesel, still taste the truck stop coffee, still feel the bus seat beneath me. I don’t know that I’ll ever be able to kick the habit, and I don’t think I have a problem with that.

My parents are the ones who got me hooked. I was still a baby, and wouldn’t stop whining about one thing or another (teething, hunger, crankiness, the Ford administration). In a last-ditch effort to shut me up, they plopped me down between them on the bench seat of the pick-up truck, and rumbled around the countryside until I passed out cold. It worked every time, so they kept doing it. I don’t blame them—I’m a good whiner as an adult; I can only imagine how good I was at it back then. Besides, how could they have known they were creating a transient monster?

One of my earliest memories is of waking up in the over-the-cab bunk of our family camper, moving down the road. I was no older than three, and it was the middle of the night. We were in a campground in Manitoba, one of several stops on our trans-Canadian vacation. Apparently, Dad couldn’t get back to sleep, so he decided to get us in motion well before dawn. I opened my eyes to an almost ethereal parade of taillights and green highway signs that shined through the darkness as we passed them. It was the most comforting glow I had ever seen. No Christmas tree, no campfire, no nightlight on earth had ever given me such a total feeling of peace and calm. I fell asleep again quickly, clutching my Snoopy doll, the rocking of the road lulling me back to dreamland.

I was hooked. There was no going back. I was a full-blown road addict, and the only wheels I owned had the word “Tonka” emblazoned on them.

My addiction was fed throughout childhood—on all sides, from all sources. We moved no fewer than 18 times before I left for college. I had four high schools alone, and just as many elementary schools. For most kids, that much moving would have been tragic. For me, it was a chance to wipe the slate clean nearly every year, AND it was fantastic damage control. Manage to offend the biggest bully on the block? Accidentally kiss your best friend’s girl at the homecoming game? Not to worry, my young foolish friend! U-Haul is there waiting to cart you and your whole family off to a land where you’re once again the new kid; where nobody knows your name yet (or what a royal jerk you’ve been somewhere else).

Now, I can see what all the moving really was: the ultimate enabling of my road addiction. I may not have lived on the road in the literal sense, but with all the constant moving, the highways that got me there were far more permanent a presence in my life than whatever roof happened to be over my head at the time, whichever state we lived in, whatever school I was attending that year.

Even when I wasn’t on the road as a kid, the thought of travel and adventure loomed huge in my mind. In between moves, in the months between un-packings, I would pore over the scores of maps and atlases that my family had lying around. With every National Geographic came another insert, another map of some distant place for me to dissect. Maybe I should have been roller-skating or getting into trouble somewhere, doing kid stuff; but the maps called to me, promised me one more road I hadn’t yet seen, one more journey I had yet to take, one more travel fix to feed the addiction that lay dormant in those intervening months of stasis.

Starting in second grade, I was the official family “navigator” on all trips (there was no cry of “Where are we??” from our back seat; it was my gig to KNOW). Not only did I have the names of all the state capitals memorized, but I could also tell you which interstate highways ran through them, if any.

My parents’ maps were a gateway to stronger stuff. When we took a vacation to Florida the summer after fourth grade, my personal highlight was hitting the Orlando airport one evening and collecting all the airline timetables I could get my fingers on. The offerings at Nashville, the nearest airport to me at the time, were already well-picked-over and had me interested—if not somewhat confused (“Why on earth would I fly through Atlanta to get to New Orleans??” my kid-brain would wonder aloud). 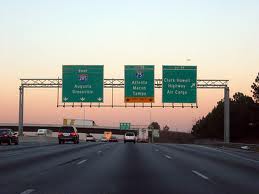 Orlando was my Comstock lode, a veritable treasure trove of international and exotic domestic airlines (anybody remember Braniff and Eastern?). I was like most kids are at, say, Disneyworld; roaming down the rows of deserted ticket counters, eyes bugged out in jubilant wonder, dodging the night cleaning crew as I grabbed timetable after timetable, most of them with system maps neatly tucked into the back cover. It was more than enough to keep me quiet all the way back to Tennessee, mired deep in a new world of addiction to which I could aspire for years.

Any travel, by any means, was my drug, and my addiction to it could not be sated. My condition became more acute with every new experience.

Once I left my parents’ home—wherever it was at the time—things slowed down for me considerably, and I didn’t know how to react. To start college, I spent three years in one town alone! I had to drop out of one school and start at another just to give myself a quick fix, but even that wasn’t enough after such a drought. I only lasted one quarter at my new school before addiction drove me into an entirely new kind of road experience: the cruise ship gig.

Until I dropped out of college to take a job playing on a cruise ship, I had to choose between my addiction to the road and my desire to sleep in the same place more than one night in a row. All of a sudden, I was playing my gig while we sailed to the next port, with my PJ’s hanging on a hook not that far away in my cabin. I had everything I wanted in one place, AND—in a wormhole-style twist of existential possibility that only a floating hotel can provide—that place was constantly moving around the Caribbean. It was a perfect storm, minus the heat (see: The Wrong of Spring, or DO Sweat it), the ultimate road high.

In my current version of adulthood, the one where I’m married with a doctorate I don’t use, I have learned more effectively to manage my addiction. After all, travel isn’t inherently rough on anything except perhaps the wallet and the ass (stopping to walk around will help the latter; the former is outside my expertise). It’s all about knowing what you want. For me, cruises wear thin about three days before they’re over; flying in airplanes—unless I have enough seats to sleep lying flat—doesn’t do it for me anymore; and trains are nice for a day, but they can’t swing you by the beer distributor before a long hit-and-run.

The bus is my fix now, and I can’t get enough. Fill it with a big band, inject directly into your life for a week to three at a time, and collect a paycheck for it. The buzz always runs dry when you get unceremoniously dumped curbside at an airport somewhere at 5:30 a.m., fewer than eight hours after the last note quit ringing in the hall, contemplating the same question that vexed me as a child (“Atlanta? Really? From O’Hare to Laguardia, and I’m going through ATLANTA???”). But, while it lasts, it’s the greatest buzz there is, shared with good friends and colleagues who, like me, want nothing more than to feed the road addiction we all have, for as long as we can.

When I’m at home, which is most of the time these days, I have dreams about being on the road. Every single night.

. . . And, when I’m on the road, I have dreams about talking pancakes wearing bowties, gumdrop trees, and Oreo trains that run on Twizzler tracks.

I don’t know what it all means, but it’s awesome.