“At first, I noticed that the glass panes of the porch door were reflecting mauve and other tones in the aftermath of the sunset. It seemed I must be in Norway’s latitudes, though I was in fact studying my neighbor’s house in Eugene, Oregon.”—Meredith d’Ambrosio 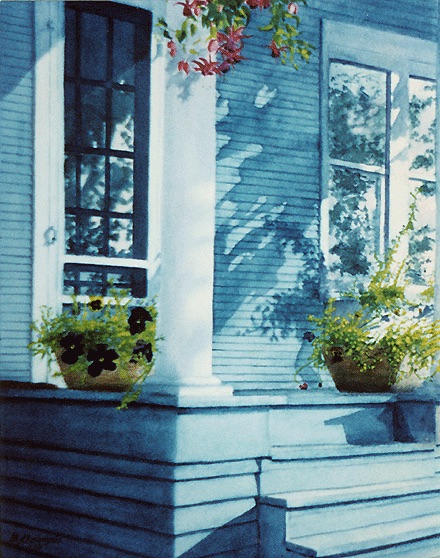 While painting this scene on location, after several hours of deep concentration, I realized that the sky was still bright at 11 p.m. At first, I noticed that the glass panes of the porch door were reflecting mauve and other tones in the aftermath of the sunset. It seemed I must be in Norway’s latitudes, though I was in fact studying my neighbor’s house in Eugene, Oregon. I turned to look at the sky behind me to make sure it was not my imagination. When I had first begun to paint, many hours earlier in the evening, my fascination was with the large black pansies and the sprawling light-blue lobelia with their yellow centers. To my surprise, painting this veranda shifted to a lesson in the seasonal light of the far north. 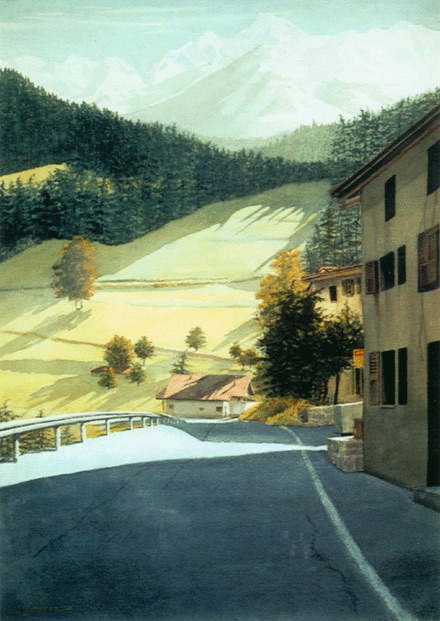 After leaving Versegeres, Switzerland to return to Verbier, my sister Elaine drove me and my husband, Haydn, back to her home. As we traveled along winding roads, we came around a bend in the small village of Champsec, and were met with this breathtaking scene where velvet, young, spring-green meadows swooped up into snowy alps touched by the hovering clouds. Needless to say, I vacated the car long enough to quickly sketch, then photograph the scene for reference. We were soon on our way downward and around again, then twisting and winding upward to return to Verbier, close to the clouds. 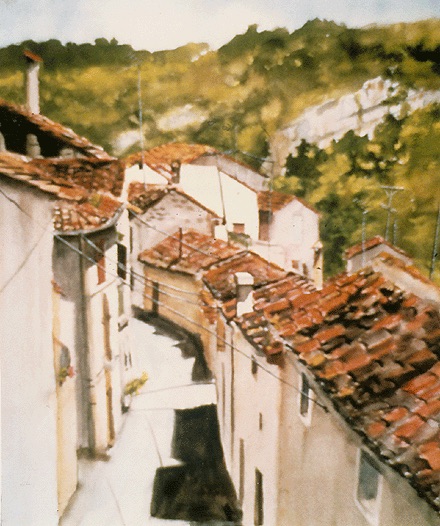 This was the first of four watercolors painted on location from the second story of the refurbished castle where I stayed for four days in Collias, France. Collias was originally a village in Greece circa 600 to 800 B.C. and was replicated by its Greek villagers, street by street, in 800 B.C. after they were shipwrecked off the coast of southern France. I strained my neck while painting this scene, looking to my left at the street below from the second-story window. Although it was not in my view, I could hear the Gard River rushing by. The owner of the castle, Olivier Leguillon, a filmmaker, produced a documentary titled Meredith Vs. the Arts which recorded my solo concert in Avignon and the creation of all four paintings in progress during my stay in Collias.

Note: Meredith d’Ambrosio’s exhibition of paintings entitled “Landscapes of the North Countries” will run from Sunday, November 15, 2015 through Sunday, February 14, 2016 at the Art Complex of Duxbury, Massachusetts, 189 Alden Street, Duxbury MA; daily opening times, 1 till 4 p.m., Wednesday through Sunday; Monday and Tuesday, closed. The opening reception will be held on Sunday, November 15, 2015, 1:30 to 3:30 p.m.; Ms. d’Ambrosio will give a concert, accompanied by Chris Taylor on piano.