(For Installment One of this saga, please return to the Weekly Hubris archives via this hot link: Greg Lloyd Smith, William Victor Bernson III, AKA . . . Legion)

TEANECK, NJ—(Weekly Hubris)—8/12/10—Joel Chandler Harris, who wrote the Br’er Remus stories and, in particular, the Southern yarn about Br’er Rabbit and the Tar Baby, has been much with me of late, as the saga of my currently imprisoned former editor, and former “buddy” in Greece, Bill Bernson, unfolds in Great Britain (in Wales, largely, where he’s doing 16 months for identity theft).

Br’er Rabbit, the protagonist of Harris’s rural animal fable, comes upon a baby made of tar (sticky, silent, darkly menacing) on the road, and attempts to engage the human-seeming creature in conversation. Getting no response—naturally; this is a toddler made of tar—Br’er Rabbit becomes exasperated and hauls off and hits the silent sculpture, becoming ensnared (to a greater and greater extent) in the tar, himself. 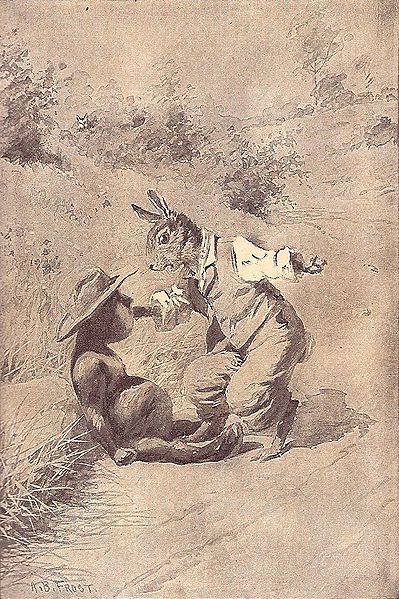 Just now, with British journalists hounding me on a daily basis for interviews about and photos of Bernson (I being the only person on the planet, it seems, to have known him under his real name and his stolen identity as Greg Smith), I feel as though I’ve succumbed to the chill, Velcro-like embrace of the homunculus that is . . . every sociopath, every con–man or –woman; every “Tar Baby.”

On our home answering machine, on Facebook, in my e-mail box every morning, there are earnest, overworked young British journalists asking: “Do you have any photographs of Bill and you together?” (No, Idiot: he has a 200 IQ. Think he’d let someone snap a photo of him with the only person on the planet who knows him by his real name? Get a grip.); or: “Is he a charmer? Were you attracted to him? He’s loved and left so many innocent women and babies in his wake? Were you ever tempted?” (Well, no. I, too, have a pretty high IQ, and Bill’s a disaster you see coming a long way off. An eight-years-younger-than-I disaster, too, who can’t conjugate a verb to save his life. But, yes, he’s funny, if short. And we were ‘Best Buds’ many years ago at The Athenian Magazine in Greece. To be honest, all of our Athenian Advertising Directors, but one, were mad as hatters, if bright and engaging, too, and Bill was no exception.); or: “How in the world did you end up working as Editor-in-Chief for a con-man if you knew he was a con-man?”

That last question is a difficult one. Presbyterian-Yogini that I am, Dear Reader, I suppose I thought I could reform him; teach him empathy; jump-start a heart in his chest. Like Br’er Rabbit, I thought I could get The Tar Baby . . . to talk; to make like a human being. Starfish can re-grow arms, I reasoned: Bill might stay put with his umpteenth wife (Katerina Theohari, of Mykonos), and remain faithful to his current brood of children. Miracles might happen. 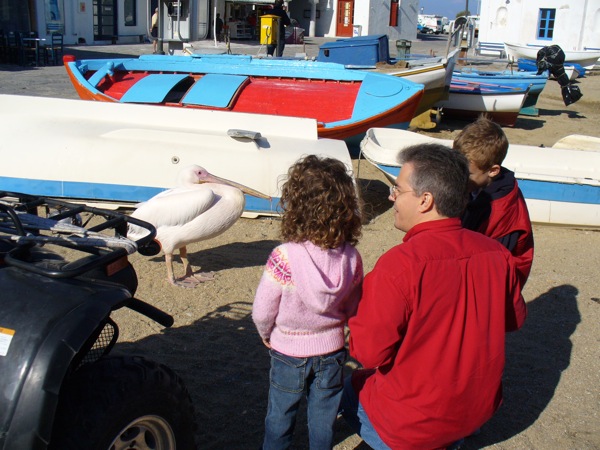 The FBI really had a hard time believing that I, and my stable of some eight, hand-picked-by-me Op/Ed columnists actually edited and wrote for Bill, as the Publisher of www.OfficialWire.com, for free, but we did. In fact, I believe, still, that it was my and their hard work, and the archive of columns we amassed for Bill, that enabled him to attract Google’s advertising, and pass the site (a thinly-veiled, money-making-through-paid-press-releases machine) off as an actual news and commentary publication.

When I began work for him, though (my first column, “Just Google It,” now purged from the site like Trotsky from those Soviet-era group photos of Stalin et al, ran on September 16 of 2007), I believed Bill had turned a corner and, the father of three little half-Greek children, was trying to go legit. I wanted to help. I didn’t want money. Heck, seemingly, he had no money, as he kept hitting my husband and me up to fund this and that make-money-fast scheme (Water Taxi, Spuds-to-Go, etc.). Bill’s ideas were often brilliant, but they required hard slogging work and capital, neither of which we two old codgers (Dean and I) could supply.

But I could edit his site, for free. And I, and my writers, wanted a large reading audience—which we set about cultivating for OfficialWire.

One by one, the writers fell away, though, insulted by Bill in his frequent fits of pique. Two of them—men, of course; cultivated, educated, older men, with whom Bill has always had difficulties—really got to him, and he savaged them in e-mails. I should have seen the writing, the tar, on the wall, then.

Finally, in the fall of 2009, from one day to the next, I and all my remaining staff were axed from the Masthead (Bill called me, shouting loudly down the phone; enumerating all my many failings and inadequacies; essentially ending the friendship I thought we had from one minute to the next). I cried and cried, as he was so brutal. Mr. Hyde, with the gloves off.

Had the Feds come too close? Did he realize he was about to be exposed? I may never know.

Precipitously, he had moved his entire family from SE77QF, in London, to rural Wales. Immediately, he’d got into wrangles with authorities at the local grammar school (which his son attended), writing about it manically and off-the-wall in OfficialWire. Suddenly, his business schemes had become more hare-brained (a Yoga Centre essentially “lifting” Bikram Yoga’s entire “Hot Yoga” curriculum). I told him he was going over the edge. And Bill doesn’t like to be told he’s going over an edge. I had now become The Other; The Adversary; Danger, Danger, Will Robinson! 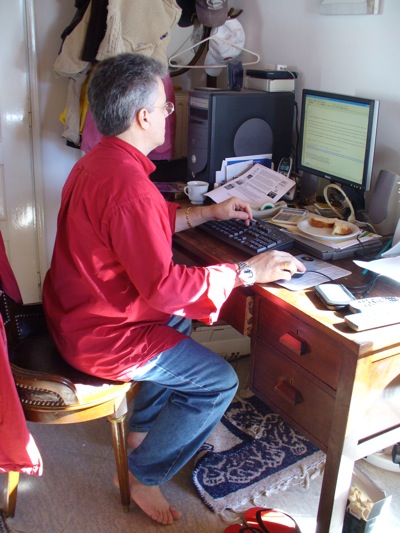 Bernson in Ornos, Mykonos, at work on OfficialWire, 2008

Ironically, in 1998, under the nom de plume (and another favorite alias), Brian Richards (still listed on OfWi’s Masthead), he wrote up his entire life story of crime and deception (up till then)—Footnotes To A Scoundrel: A True Story of Love Lies & Crime (sic)—and was brazen enough to have Katerina mail me a copy from Mykonos. The book came out under Bill’s own imprint, The Origin of Books, and was published in Great Britain. The FBI has a copy, too, it turns out.

As does Bill Bernson’s first son, born William Victor Bernson IV, c. 1978, I reckon. “Billy,” who now uses his mother’s maiden name (understandably: Bill abandoned him virtually at birth), and I are in touch, and I’m awaiting a copy of his parents’ marriage certificate, and photos of a just-out-of-high-school-Bill holding his first-born.

Apparently, when Bill left Billy, he gave him a watch and promised he’d return on the boy’s 18th birthday. Didn’t happen.

Billy’s mother, and Billy, himself, are still bitter. As are the other wives, fiancées, and mothers of fatherless children Bill’s left in his wake.

But the abandoned first son’s very much looking forward to seeing his father, eye to eye, for the first time, and that time may come soon for him, when Bill is extradited to the US to face charges here.

To address Bill and Katerina directly, which I have been reluctant to do, I really just want to ask them Why? and How? Why, Katerina, are you in denial about this man’s being who we all know him to be: William Victor Bernson III? And how, Bill, could you imagine I’d turn you in to the FBI? I’m not the one who turned on you: you turned on me, and my writers. And, largely, we went quietly. It wasn’t our place to threaten M., P., and C., your three-children-bearing-the-stolen-last-name-of-Smith.

Katerina, it’s time to go home to Greece, taking the kids, because soon, all kinds of things are going to hit Bill’s fan—none of them pretty. It’s also time to investigate whether or not your marriage is legal. I hope, European law being more humane than American, you are legally married, no matter what phony ID’s Bill used in Greece at the ceremony. But, if I were you, I’d do some hard thinking about “your sisters in misery”: I, myself, would want to seek out and speak with the Mrs. Bernsons 1, 2, 3, 4, etc., etc.

Very soon, Billy’s mother, and perhaps Carol, Bill’s British wife, and mother of an abandoned infant for whom I bought baby clothes in Athens many years ago, will be heard from, at last. He mentions them in that roman a clef you sent me in 1998. I assume you read your husband’s first book when it came out. Your name is on the packing slip.

And the book is even dedicated to me (God, the man has gall): “9/5/98 E, For all its (sic) worth—here it is. Based on your model, I’ve failed terribly—but with your counsel, there may still be time for me to become a writer!! L Spam [one of our Monty Python, in-jokes dating from Athenian days] XX”

Bill, forget becoming a writer—unless you write the scenario for the film of your life. Concern yourself, please God, with becoming . . . human, now. And a real father. There really is lots of time. You’ve got a big, honking brain in your noggin’, and a lot of lost children out there to whom you need to make amends.

Stop spinning those wheels, and scheming to make your next million or seek revenge on chimeras . . . fast and dirty.

The Tar Baby did not, I think, come to a good end.

PS Nice penal system you have there, Wales! After this admitted felon was jailed, he managed to smuggle out and post a column (on May 2, 2010), written under his stolen name, on OfficialWire.com that libels me, my family and friends no fewer than 43 times . . . if one counts the title, as well. I won’t give Bernson the pleasure of suing him for libel: it’s not worth the aggro or money. I only hope the US authorities will keep a closer watch on his activities while he’s in their care.