Dude, I know it’s tough being
The butt of ugly jokes
But look at it this way, man—

You could’ve been born with four eyes.

Comments: I don’t know about Cinquor, but I’ve been wearing glasses since the second grade and that never stopped me from becoming—I think—the oldest, shortest and most farsighted (!) poet writing in English in the Peloponnese. I must admit, however, that many slings and arrows of outrageous misfortune were aimed at my sensitive, wispy frame by fellow classmates during my elementary school days and that their barbs did indeed cut to the bone.

When you think
You can’t

Comments: C’mon, Huuklyeand, are we supposed to swallow this hook, line and sinker? No way.

Somewhere round
Here is a square peg.

Comments: The apotheosis of the absurd in only seven words; however, what remains of my frazzled logic impels me to peg the odds at 99-1 that prior to writing this “exercise in futility,” Cinquor envisaged the specter of the great Archimedes uttering his famous last words “Do not disturb my circles” just before an enraged, mathematically ignorant Roman soldier “put him in a pine box” for what he thought was insubordination when, in reality, all the good mathematician had in mind was to continue his line of thought undisturbed, outside the box. 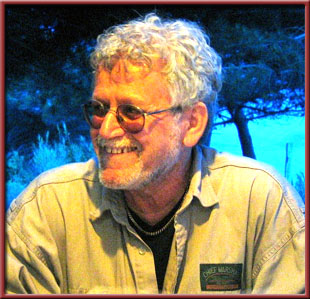 MELIGALAS, GREECE—(Weekly Hubris) 01/31/11— What’s in a name? Well, if it’s Huuklyeand Cinquor’s, just the sight of it should be enough to send most readers into convulsions; those who get over the initial shock of seeing such an odd name are still faced with the daunting task of pronouncing it, not to mention examining its etymological roots. As a matter of fact, ever since Cinquor selected me as a conduit for his apophthegmata, my incoming e-mail box has been inundated by a steady stream of inquiries about his unconventional moniker, so I think it’s high time I did some serious speculating about it.

So where is one to begin? For a start, let’s examine the spelling and separate the words into their five respective syllables: Huuk-lye-and Cin-quor. Stress? ( ’- -’- ) To my romantic ear, this meter sounds suspiciously like Byron’s romping anapests in his poem “The Destruction of Sennacherib” i.e., “The Assyrian came down like the wolf on the fold, and his cohorts were gleaming in purple and gold,” but I could be mistaken. However, if it is anapestic, we must examine the possibility of Huuklyeand’s being an Assyrian name and Cinquor’s a Hebrew one, basing our interpretation as such on Byron’s poem, which is a rendering of the famous battle for sovereignty over Jerusalem written from the Hebrew point of view, viz. Huuklyeand (Assyrian) and Cinquor (Hebrew)—an amalgamation symbolizing the assimilative bi-polar properties of the imagination whenever it’s faced with a situation requiring the deployment of imaginal space as defined so eloquently by Joe Hutchison in one of his recent, illuminating posts.

So far so good, but we have to be a bit more cautious when approaching the thorny subject of pronunciation, so let me take a stab. The first syllable is most certainly pronounced as the double “o” in “look” rather than “Huck” as in “Finn” or “Hulk” as in The Green Giant, a claim based on the fact that there was no Huck Finn, Hulk, or Green Giant when Byron composed his poem; the second syllable looks like “lye” but, on closer investigation, there could be a diphthong lurking in there, making the syllable sound like “lie-in,” “line” or “lined”—your guess is as good as mine (not as in “mien”). “Cinquor” poses no problem and should be pronounced as “sinker” and certainly not “sank-her” or, worse yet, “canker.”

Of course, this column is always open to other speculations regarding Huuklyeand’s name, as long as they have that inimitable air of gritty conviction we have all come to expect from his apophthegmata.

*Singular, apophthegm, a rather rare malaise characterized by an overwhelming urge to express one’s self in terse, instructive aphorisms, not to be confused with the more familiar apoplexy, a confusion brought on no doubt by the Greek etymology of both terms, but also because such aphorisms frequently leave their normally loquacious victims dumbfounded and speechless—as if stricken by

hordes of howling Assyrians coming down like wolves on the fold.

**See http://en.wikipedia.org/wiki/Negative_capability for a deeper understanding of this somewhat deceptively shallow-appearing poem.

Vassilis Zambaras According to such reliable inside sources as The Weekly Hubris’s Publishing-Editor, VazamBam aka Vassilis Zambaras is all of the following, and more, in an order no one can vouchsafe as definitive: a publishing poet who writes every day of his life; a hugely successful father (and a not-so-very-successful local political candidate); a professor of English as a Foreign Language, with portfolio; a Renaissance Man of many skills, useful and not-so; a fount of information about his particular corner of his birth country; an unstable and utterly unique mix of Greek and American, American and Greek; and the man fortunate and wily enough to have made off with Messenia’s loveliest and most talented local daughter as his child bride. Besides being all the aforementioned, other more dubious sources have also reported seeing him hanging out at the corner of vazambam.blogspot.com—in the guise of a “new old kid on the blog, with an occasional old or new poem written off the old writer’s block.” Author Photo: Pericles Boutos
View all posts by Vassilis Zambaras →
This entry was posted in Uncategorized. Bookmark the permalink. Follow any comments here with the RSS feed for this post. Post a comment or leave a trackback: Trackback URL.