“Most of what I saw there is now forgotten, and rightly so, but I did find myself somewhat hooked on a courtroom show called ‘Judge Judy.’ I, of course, knew of Judge Judy, but I’d never paid her or her show much attention until my long, unexpected sojourn in the hospital. However, since she seemed to come on the air two or more times a day, I got into the rhythm of watching.” —Wayne Mergler 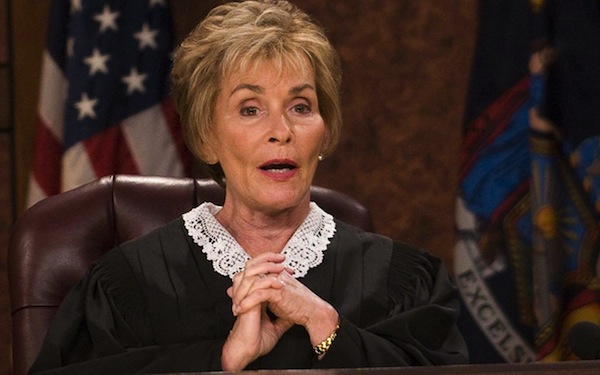 ANCHORAGE Alaska—(Weekly Hubris)—12/2/2013—It has been nearly two years now since I suddenly found myself enduring surgery for prostate cancer followed by a devastating bacterial infection (sepsis) and then, as the climax to it all, open-heart surgery to repair damage from the infection, all within a period of three months.

Before I had much chance to lament my circumstances or whine about my woes, I was hospitalized, anesthetized, transported to and from Intensive Care, stuck with needles, festooned with tubes, pick-lines and catheters, stuck with more needles, and greatly entertained by drug-induced hallucinations.

I lost 60 pounds (that was a good part) and slept through almost all of it (that was the other good part.) When I was not sleeping and not having tubes changed and blood drained, I lay in my elevated hospital bed and stared at the TV set mounted on the wall.

Most of what I saw there is now forgotten, and rightly so, but I did find myself somewhat hooked on a courtroom show called “Judge Judy.” I, of course, knew of Judge Judy, but I’d never paid her or her show much attention until my long, unexpected sojourn in the hospital. However, since she seemed to come on the air two or more times a day, I got into the rhythm of watching. She made me laugh (even though it hurt to laugh), she made me ponder the law, she made me marvel at the astounding dysfunction of some people’s lives, she terrified me, and she made me mad—sometimes all of the above in the course of one brief episode.

Judge Judy is a woman of my own generation, a real-life judge who deals with the legal suits of real-life litigants. Since Oprah Winfrey no longer has her TV talk show, Judge Judith Sheindlin is now the highest-paid woman on television. It’s mind-boggling that she makes so many millions an episode dispensing justice, wisdom, and abuse from her desk in a dizzying, all-but-patented blend of self-righteousness and uncanny accuracy. During most shows, the viewer doesn’t know whether to love her or hate her; usually, he does both. She is tough, terrifying, mean-spirited, caustic, and a bully. She is also funny, wise, charming, brilliant, and immensely entertaining. But, above all else, she is almost always right.

She’s been called a bully (by myself and others) because she often eviscerates the little people “in the dock,” leaving them blinking in disbelief at what’s just happened to them, their very first time on television. Her behavior is bully-ish because Judge Judy is usually (at least) 20 times smarter than those who appear before her, and she knows it. She’s also comfortable on her own turf, having called all the shots at this, her rodeo, for years now.

The litigants who come before her are on terra incognita, out of their depth: they are nervous, frightened, some facing a camera (and judge) for the very first time in their lives; dazzled, frazzled, and distracted. By the time Judge Judy is through with them, they don’t know what’s hit them. Sometimes, she seems unnecessarily cruel: (“Is there something wrong with you?” she will shout at a trembling litigant. “Are you on something? Or are you just stupid?”)

You could not pay me enough to appear as a litigant in Judge Judy’s courtroom.

And yet, despite her sometimes rough style, she is undeniably fair. Quite often, the person she seems most annoyed by is the person who wins the case and is awarded a generous settlement. She is usually equally tough on both parties. And, as I mentioned above, her decisions are overwhelmingly correct.

She can also be surprisingly tender and compassionate to some. She is kind to children, and rarely lets them stay in the courtroom if there is testimony which they may find disturbing or frightening. She is sympathetic to people who have clearly and unabashedly been victimized. Yet she has her own pet peeves.

She is usually very hard on young men—the beer-drinking, party animals of college age seem to be her least favorite people. “They are young men,” she says. “They are idiots.”

She also distrusts and is annoyed by teenagers who have misbehaved. “Do you know how to tell when a teenager is lying?” she asks bewildered parents. “Their lips are moving!”

She is equally annoyed by parents who are blind to the faults of their children. “You may think they are precious and special, but I do not!”

She is exasperated and frustrated by women who allow men to use them. To one GQ-looking playboy, she recently said, “You may think you are extremely attractive, but I don’t see it at all.” When one perplexed litigant said he did not understand her verdict, she replied, “Then you, Sir, are as dumb as a bucket of rocks!”

Most of all, she dislikes the irresponsible. She’s particularly tough on adults who do not work, on fathers who pay no child support, on men who mooch off of women (and on the women who allow them to do so), and on parents who allow their children to be spoiled brats.

Judge Judy’s TV show is apparently one of the most popular on the air. I certainly keep watching it. If I am channel-surfing late at night and I come upon an episode of Judge Judy, I invariably stop there and watch. Why does this largely unpleasant woman appeal to me, to us, so much? I’m no psychologist, but I think I understand some of it.

Judge Judy’s in an enviable position. She is almost able to get away with anything. We envy that. We wish we could pull it off. And I have to admit that, even though I feel sympathy for the poor, largely harmless schmucks who are gutted by her sharp tongue on a daily basis, I cannot help but applaud with some kind of perverse glee when she socks it to the jerks and creeps who so often appear before her.

If you suspect that you may be obnoxious, my advice would be that you avoid Judge Judy’s courtroom at any cost.

As for me, if I am ever (God forbid!) in the hospital again, I wouldn’t mind having Judge Judy there with me, holding my hand for the duration.