Let’s Hear It for a Singable, Ideal-Imbued National Anthem

BURLINGTON North Carolina—(Weekly Hubris)—3/12/12—The melody of our national anthem climbs above the range of most untrained singers—that is, most of us—when we come to, “And the rocket’s red glare, the bombs bursting in air.” If we can go falsetto, we take a stab at singing along; if not, we drop out until the notes fall again within our range. We rejoin trained singers at “Oh, say does that star-spangled banner yet wave/O’er the land of the free and the home of the brave?”

A song far more singable and equally as patriotic should become our national anthem. Permit me to make a pitch (as have many others) for Katharine Lee Bates’s “America the Beautiful.”

Her poem has had its backers, particularly during John F. Kennedy’s term in office, but Francis Scott Key’s battle-inspired lyrics have more congressional backers. Perhaps if Mitt Romney becomes president (Heaven Forfend!), there will be another push for “America the Beautiful,” it is to be hoped in Bates’s own words, Romney notoriously having fumbled some of them. 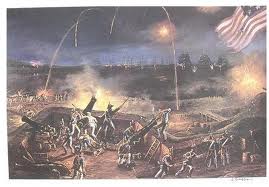 The shelling of Fort McHenry.

Key’s witnessing of the shelling of Fort McHenry by British artillery during the War of 1812, and the presence of the American flag after a night of heavy bombardment, led him to write a poem he entitled “Defence of Fort McHenry.” The melody that seemed to suit his lyrics best was the work of a British composer, John Stafford Smith, who had fashioned a tune used to accompany “To Anacraeon in Heaven,” a poem written for a drinking club in London. The range of the melody is an octave and a half, too wide a spread for untrained singers.

Retitled “The Star-Spangled Banner,” the poem with the Smith melody, although sung at such public events as baseball games in the late 19th and early 20th century, did not become the national anthem until 1931, when President Hoover signed a congressional declaration favoring it over other contenders, “Hail, Columbia” and “God Bless America.”

Befitting the single event stirring Key to write, in a time when a young nation was, essentially, fighting its second war of independence, the poem’s images and rhetoric are, idealistically, a call for freedom, expressed as a refrain in the poem’s four stanzas: “O’er the land of the free and the home of the brave.”

However, closely read, the burden of the poem is a versified chronicle of the shelling, a condemnation of the “haughty foe,” and a patriotic celebration of the fighting spirit of the men defending Fort McHenry. The lyric ultimately becomes a hymn to victory, a shout of triumph over “the havoc of war and the battle’s confusion,” for the British foe has failed to remove a fort protecting Baltimore.

The still-waving flag symbolizes the fighting spirit of the young nation; its will to endure.

But does the anthem accomplish what many national anthems do—define our nation and express many of our core ideals? I think not. Indeed, its purpose was never that. 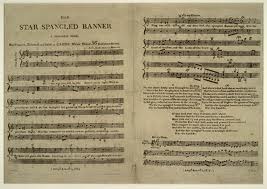 Beautiful.” Befitting the title she eventually gave it, the poem grew out of her sense of the great breadth of the nation, as she composed the first draft upon visiting Pike’s Peak. She was taken with the natural beauty of the country—its “amber waves of grain,” its “purple mountain majesties,” its “alabaster cities,” and its “fruited plain.” These images suggest both the bounty of the land and the work of its citizens to build and enjoy their nation.

With great economy and telling suggestiveness, she encapsulates the America’s history: its settlement addressed in “pilgrim feet/Whose stern impassioned stress/A thoroughfare of freedom beat/Across the wilderness!”; its fight for freedom and independence in “O beautiful for glory-tale/Of liberating strife/When once and twice/For man’s avail/Men lavished precious life”; and the deeds of its heroes, who in “liberating strife” were men “Who more than self their country loved.”

These are words were meant to celebrate also “the land of the free and the home of the brave” but, rather than settle for Key’s abstractions, Bates provides evocative contexts.

She denotes the nation’s achievement of its manifest destiny in the phrase “From sea to shining sea,” an image echoing a note she made immediately upon looking out from Pike’s Peak: “When I saw the view, I felt a great joy. All the wonder of America seemed displayed there, within the sea-like expanse.”

As she came to know this nation and others better, she dwelt on the ideals she believed our country should embody.

Liberty, yes, but liberty exercised and governed by “self-control.”

Life, yes, but life lived in such a way that “selfish gain no longer stain[ed]/The banner of the free.”

The pursuit of happiness, yes; but a pursuit dependent on the grace of God, whose crowning good for our land would be “brotherhood.”

She shared with Key the belief that God had an essential role in the nation’s well-being, for through Him would come blessings, and thus she would have sincerely approved of a phrase in the fourth stanza of Key’s poem: “In God is our trust.”

Considered in its entirety, Bates’s poem far exceeds “The Star-Spangled Banner” in presenting both the physical breadth of the nation and the ideals its people hold dear. That might explain why, after 9/11, broadcast outlets across the nation repeatedly played “America the Beautiful.” The poem and its music proved healing, unifying, assuring. The playing promoted a spiritual bonding, something far more needed at the time than bellicose bravado.

That music, composed by organist Samuel Ward for a hymn entitled “Materna,” may be easily sung, requires no special training or gifted voice, and adds a stately solemnity to Bates’s lyric. Together, lyric and tune, this composition would far better serve us than Key’s battle-inspired words and the hard-to-sing tune penned by John Stafford Smith.

To feel the power of Bates’s words and Ward’s music, go to the Internet and click on a YouTube presentation of a soulful rendering by Ray Charles. Then ask yourself, “Why is ‘America the Beautiful’ not our national anthem?”

One Response to Let’s Hear It for a Singable, Ideal-Imbued National Anthem