“Growing up on the island of Mykonos in the 1960s, my brother and I were the only blond and blue-eyed children in sight. In fact, we were among the very first foreigners to live on the island. Our shared nickname was, simply, ‘The Americans.’ As far back as I can remember, I was always desperately trying to fit in. Blend in. Like a fly in a glass of milk, as a friend said, oh, so eloquently.”—Chiara-Sophia Coyle 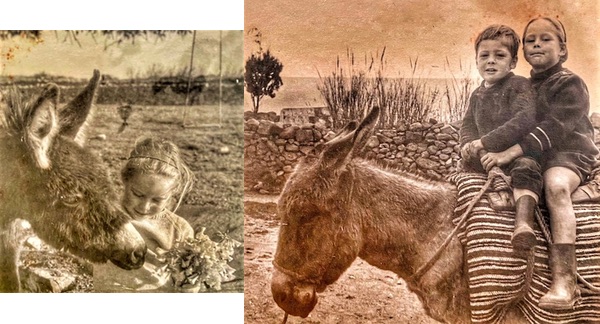 SONOMA California—(Weekly Hubris)—May 1, 2021—Growing up on the island of Mykonos in the 1960s, my brother and I were the only blond and blue-eyed children in sight. In fact, we were among the very first foreigners to live on the island. Our shared nickname was, simply, “The Americans.” As far back as I can remember, I was always desperately trying to fit in. Blend in. Like a fly in a glass of milk, as a friend said, oh, so eloquently. “Be” one of them, not the one they pointed at while making various comments (positive ones, for the most part, at least while I was a child, but still).

My parents had various ways of our “being,” however, that ensured blending was never going to happen.

For example, I was never allowed to eat sugar and was therefore “the American girl who was not allowed sweets.” If you know anything about Greeks, you know that sugar, for them all, is the path to the heart. My mother entrusted me to the fishermen at the kafenio (men-only coffee shop) while she ran errands in town with clear instructions: they shook their heads, taking pity on deprived little Sophia, and successfully tempted her to consume βανιλια υποβρυχιο (a fondant submarine), dense sugar-on-sugar with vanilla, served on a spoon standing in a glass of cold water. There were “code” words they taught me should I be asked what had been offered me: none bore a mention of sugar. I wonder what my mother made of my sugar highs. These visits were the beginning of my bonding with the fishermen’s world.

My mother gave me outrageous hairdos that had her hairdresser in a spin when I accompanied her weekly for her in-fashion beehive hairdo. I can still remember Kyria Maria’s shrieking voice as she frantically examined my ridiculous (to me) look-of-the-day and her angst about satisfying my mother. I was forced to keep my hair long (thanks, Dad), and man did my mother get creative with it. I think my favorite was braids around my ears (not). For comparison purposes imagine girls with long hair–just flowing freely and naturally.

My father, a merchant seaman, did not know how to swim! We were living on an island and the locals could not quite grasp this fact. He wore long-sleeved shirts in the summer, never went to the beach, and, when he took (forced) us to attend church, he would close his eyes and tilt his head upwards. All the Greek kids stared and laughed. I have indelible memories of praying in church that he would open his eyes, learn how to swim, and become a “normal” father. These prayers were never answered. 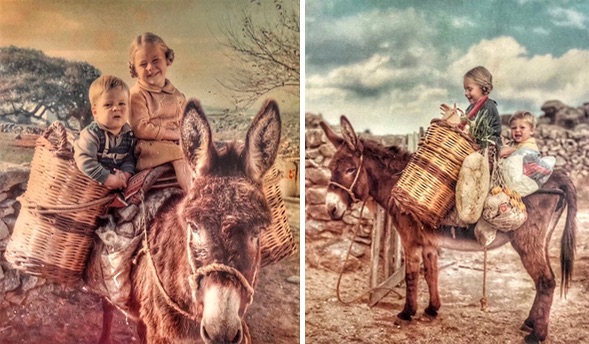 “The Americans,” in their donkey baskets.

I think my all-time favorite example of how unique my childhood was is a story that follows me to this day: the donkey basket story.

My mother, being alone most of the time, since my father was at sea, solved our transportation problem by getting herself a donkey. Lola. I have no idea why she was called Lola. It isn’t the kind of name my mother would choose. (I have in recent years named my car Lola: isn’t it all about getting from point A to point B?)

Lola was saddled and had a big willow-and-bamboo basket, probably woven on neighboring Tinos, on either side: one child in each basket on the way to town (about a 30-minute walk) and, on the way home, one child in one basket and the younger and smaller-in-size, along with the groceries, in the other. I believe this went on until we no longer fit in the damn baskets, or had a fit and refused to get in!

As the years went by, as we grew up, occasionally we would run into people who did not recognize us, and my god, there was always someone who would say, “They’re the kids that rode in donkey baskets.” It is the one childhood story that I have always found to be the most embarrassing, a constant reminder of just how much of an outsider I really was growing up. 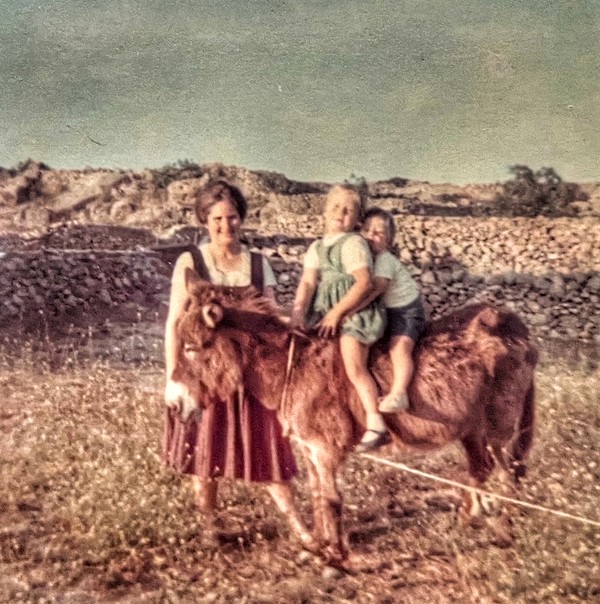 Sally Coyle and her children.

Obviously, over the years, the number of people who don’t remember me as a child has increased. I always thought, well, when these old people die, I will be free of the damn donkey story. I sure as hell was not going to volunteer any information. They don’t remember? Too bad, so sad was my attitude.

And then, on a recent trip to the motherland, out of the blue, while I was trying to explain to someone who I was, and while experiencing a degree of frustration, I blurted out, “I am the girl who rode in the donkey basket.”

“Oh,” he said. “OK, I know who you are now,” and we proceeded to chat and bond over . . . donkeys and memories of the good old days. I was dumbfounded. Shocked beyond words. Had I just brought the damn donkey story back to life?

A few days later, I was “summoned” to the harbor to meet someone who knew I was “that” girl, but who didn’t think he would recognize me. What was the most disturbing part of this to me was that both these people were my age! They weren’t old people.

Reality then struck home: the damn donkey basket story was going to be with me for as long as there are people my age around . . . which means the damn donkey story ain’t goin’ nowhere.

I have been thinking about this all day and giggling inaudibly. All these years, I have dreaded “the conversation,” “the association.” Now? I am so free of it all of a sudden, and may actually have to start telling people I meet that I rode in donkey baskets when I was a little girl.

Because that’s just how privileged and lucky I was! Phew. How’s that for letting go!

Editor’s Note: One of my early “Close to Home” columns, published in Greece in the July 1982 issue of “The Athenian: Greece’s English Language Monthly,” was titled “Twice Named: The Hybrid Children of Mykonos,” and dealt with the bi-national (and even more complex) blended families I had known on the island since my own childhood in Greece. In the 1960s, my parents befriended some of the parents of these children: I attended, in Denmark, the birth of one little boy (Danish-Mexican-American-Mykonian) who would become Chiara and Michael Coyle’s playmate. My mother and Chiara’s mother remained friends throughout their lives. I interviewed Chiara, back in 1982, on Mykonos, never dreaming I would one day publish . . . this story, or her photographs in “Weekly Hubris.” In 1982, summing up the experience of her hybrid childhood on a Greek island, a very young Chiara told this also-much-younger journalist: “I’ve really had the best of both worlds—the liberation of an American; the traditions, the solid base of a Greek.”

4 Responses to Letting Go of Donkeys