Love Thy Neighbor (Best of “Hubris”) 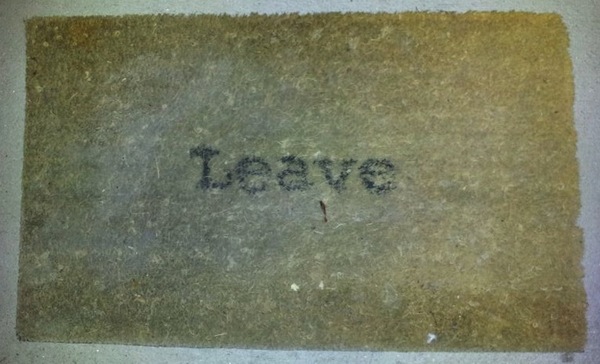 “You guys must be so tired of hearing about my housing escapades but, I tell you, it just keeps getting better. Seriously, I couldn’t make this stuff up. So, come to find out the lady downstairs is a wee bit beyond insane. Nothing strange about that. We’re all a wee bit something. Just so happens she, for some strange reason, became fixated on my ‘Leave’ welcome mat.”—F. Theresa Gillard

BOSTON Massachusetts—(Weekly Hubris)—December 19, 2106—You guys must be so tired of hearing about my housing escapades but, I tell you, it just keeps getting better. Seriously, I couldn’t make this stuff up.

So, come to find out the lady downstairs is a wee bit beyond insane. Nothing strange about that. We’re all a wee bit something. Just so happens she, for some strange reason, became fixated on my “Leave” welcome mat. This I’ve already shared with you here.

It’s one of those grass mats. She took, I’m assuming, a wire brush, and wore the mat down to the point that you can see the rubber base around the edges. I noticed this immediately.

Now, I attend the Melrose Church of Christ every Sunday. There, I’ve heard that one of the greatest commandments is to “love thy neighbor.” Of all of the commandments, this one seems a little extreme. Especially, since I’ve got Crazy Lady (CL, from here on out) complaining to our landlords about my mat. Really?

You know, I really love where I live, but I sort of went over the edge when CL thought it would be a good idea to:

a) Turn my mat around so that “Leave” is facing me when I come out (action repeated/rectified by me several times).

b) Move my mat from the back door to the front door.

c) Destroy my mat by wearing it down and creating a tear in it.

e) Cover my mat with another mat.

f) Consistently leave trash and random trash-like items throughout the yard (not to mention, Adrian’s favorite: airing out a mattress in the front yard, which was doubly irritating since we have ample side and back yard space).

g) Demand we walk through our back entrance to speak to her 30-plus let’s-get-together-for-no-apparent-reason-every-day guests.

h) Allow some of said guests to park in our spaces, forcing Adrian to park on the street.

And the grand finale, covering the mat with another mat (again) and placing a nice little sticky note on our door to inform us of how offensive the “Leave” mat is; moreover, her guests and family have to look at it and she wants it removed immediately.

OK, I was thinking that CL couldn’t possibly know what wee bit of something I’ve got up in me, but come to find out via a conversation with the landlord, during which he referred to my articles as “blogs,” CL had apparently taken it upon herself to Google me.

Damn it all to hell! This woman has been trying to get me to crack. And, I ain’t gonna lie: she had me at crater crack status.

And, I’m sorry, what is the landlord asking me? Did he say not to write about this? OMG, like for real? How could anyone agree to such a thing? I kinda figure my mortgage-sized rent was quite enough to ask of me.

I will not. I repeat, will not be censored. I would never deny you guys this. Never.

I advised Mr. Landlord that I try never to mention the last names or names at all of those about whom I write, and that my “columns” (as opposed to blog posts) were lighthearted and fun, sort of like my Leave mat.

He told me that he would just feel better if I didn’t write about anything pertaining to happenings at his rental property.

Well, I thought, he won’t be feeling very well at all, now will he? Asking me to do that is like asking a dog not to bark or wind not to blow or a baby not to cry or—I could go on forever about this. Let’s move on.

Anyways, that little sticky note put me over the edge. Enough! And, of course it was in the early a.m. that Adrian found the note stuck to the inside of our screen door. I am sooo not a morning person. I’m barely a day person.

I went ballistic to say the very least. I knew she could hear me, so I screamed that if she thought the mat was offensive, she hadn’t seen anything, yet. And, I welcomed her to come over for some neighborly loving, because I was D! well ready to give it.

By now, Adrian is really regretting having shown me the note. I calm down enough to call the landlord and advise him that this Nut could have this place. I told him that we were moving. He replies with the usual; he doesn’t understand why she’s doing these things; and on and on. I tell him that it doesn’t matter anymore.

Meanwhile, I continue my morning routine. I calm myself totally down and head out to my car. On the way, I realize I have a message. It’s my Uncle Ed. Apparently, Adrian thought I was totally over the edge, so she called back-up. Man!

My uncle’s message is soothing and he’s speaking very slowly: “Good morning, how are you? I know you’re not doing too well. But, you need to calm down. You know how neighbors are and your blood pressure is going up. So, don’t do anything crazy. Just let it go.”

I think this warrants a little phone call to Adrian. I ask her if she called Uncle Ed. She confirms this. Um, hmm. Fine. This call ends quite quickly.

I continue on my not-so-merry way. I realize once I’m out to the stop sign on our street that I’ve forgotten to take my meds. So, I turn around and park out front to run back inside.

Now, for some reason, I’m having this weird feeling. So, as I’m swallowing my pill, I go over to the window and look out. And, what do I see? Low and behold, it’s a police car! It seemed so improbable. This is the type of neighborhood where you never see cop cars—it ain’t common.

Whereas most people have a healthy fear of laws and those who enforce said laws, Theresa does not. I run down the stairs. As I’m coming out the door, a police officer is walking down the driveway to the back.

I say, “It was definitely that crazy nut. She’s been harassing us since we moved in. I’ve been reporting it to the landlord and I already called him this morning.”

I say, “I have the note she left on our door.” I give it to him. “She’s crazy. She wants me to remove my mat. It makes absolutely no sense. I’m beginning to think it’s because we’re Black.”

He says, “I’d like to say that that doesn’t happen here, but it happens quite a lot.”

I say, “I just need some peace. It doesn’t matter. She wins.”

At this point, I see CL coming out her door. I say, “I really don’t need to be facing her right now. I’m going to work. If you need to contact me or the landlord, she definitely has all of our information.”

Definitely, it was Divine Intervention my forgetting to take my meds and going back. Let’s just imagine what would have happened if the police officer hadn’t heard my side of the story. I would have probably been arrested at work. Not a pleasant outcome.

Turns out, CL’s husband or whatever he is informs the landlord that they are moving because, as he puts it, “We’ve had enough and we can’t take it anymore.”

Now come on. What exactly can they not take? Adrian and I quietly arriving home daily? Quietly living upstairs and minding our own business?

I get it. It’s the Leave mat. It quietly intimidates all who see it. It screams Leave! without even making a sound. It has driven many people to step on it. It is a proven menace to society.

The Beverly Hillbillies have moved out, but not without leaving a pile of trash in front of the house for over three weeks now, complete with a Free sign. You know, if you gotta go, why not go with bang? 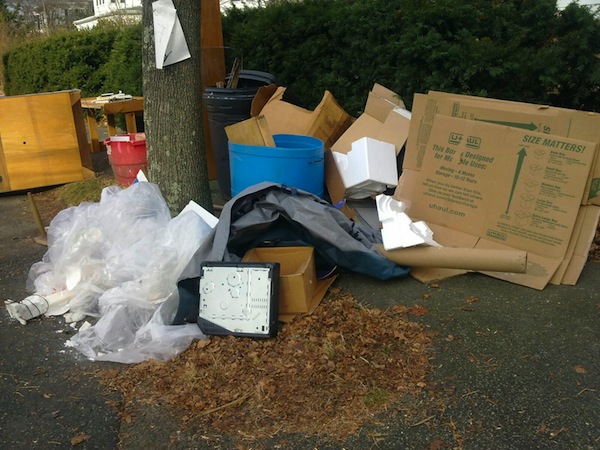 Free to a good home.

Adrian and I are patiently awaiting new neighbors to occupy the space. I truly want to be able to at least ignore them from a safe distance.

Like I said, being neighborly is like walking on the far side for me. Just would rather not.

6 Responses to Love Thy Neighbor (Best of “Hubris”)