“I did not visit Samaria this time around, but instead spent three weeks closer to the east coast of the island in a very sleepy village called Milatos, located between Iraklion and Aghios Nikolaos and about one kilometer from the beach—mind you, the beach in February, not to mention during the coldest, wettest February in 45 years! My friend Katerina warned me about the ‘tipota,’ or ‘nothing’ I’d encounter in winter—as in there’s really nada going on in rural Crete this time of year. Yet . . . there was so much in the ‘tipota.’”—Chiara-Sophia Coyle 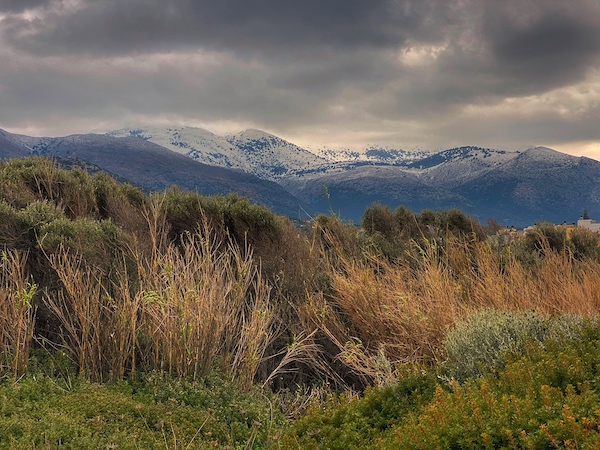 SONOMA California—(Weekly Hubris)—1 September 2022—Chapter Two of my 2022 sojourn in Greece was “inscribed” on the island of Crete, an island I have visited many times. Having spent most of my time on Crete in Chania, I have hiked the gorge of Samaria twice (and was gifted with an intense encounter with Nature each time).

I did not visit Samaria this time around, but instead spent three weeks closer to the east coast of the island in a very sleepy village called Milatos, located between Iraklion and Aghios Nikolaos and about one kilometer from the beach—mind you, the beach in February, not to mention during the coldest, wettest February in 45 years!

My friend Katerina warned me about the “tipota,” or “nothing” I’d encounter in winter—as in there’s really nada going on in rural Crete this time of year.

Yet . . . there was so much in the “tipota.” With the pace of life having come to a screeching halt, and during Katerina’s and my breaks from work or on weekends, our daily activities included: trying out all the different paths to the beach while hoping we could make it there and back before the next downpour. It was always a 15-minute excursion to witness and re-experience winter waves crashing on the rocks; waves visited and revisited, with us never really knowing what to expect beyond a continual sense of awe and respect for nature.

Habitually, too, we stopped in at the village bakery, where bread was delivered twice a week from another town. If you got your wish list in on time, you could even get all the high-quality varieties. Most of the winter residents are much older folks who rely on the good old Datsun delivery truck with its megaphone announcing a brief stop in town and a list of provisions available. Having a car allows for a 30-minute drive to real grocery stores, but you just don’t want to leave home and disturb your equilibrium, so you make it all work with whatever is more readily available.

Sunday walks involved a prayer sent up that a taverna would be open down at the waterfront when we got there because there was no way of finding out unless we showed up. Our incredible hosts at Milatos Village, Alice and Kat, welcomed us into their home and shared with us their fireplace, cats, and French cuisine. I was ensconced in a happy bubble.

A few days with a rental car allowed for exploring farther afield. The mountains of Crete left us breathless and humbled. A 5,000-year-old olive tree!? Incomprehensible! Catching the reflection of the sun on the mountain?! Turning every mountain corner revealed a new village. Stopping to find small gems: local cheese, herbs, or wine.

This was a winter visit and I do of course realize how different it would have been in summer. I was incredibly cold all the time except for a few and unexpected sunny days. It’s that island dampness and chill that goes straight to your bones as I have described in a previous post. Most places were closed. Some archeological sites had to be explored in the midst of a storm while getting soaked. Some areas I really wanted to visit were flooded. Yet . . . every single moment and experience was a gift, and I would do it again in a heartbeat.

So much wonderful “tipota” was harvested and preserved in solitude.

I hope you too enjoy these memories from my winter sojourn on Crete. 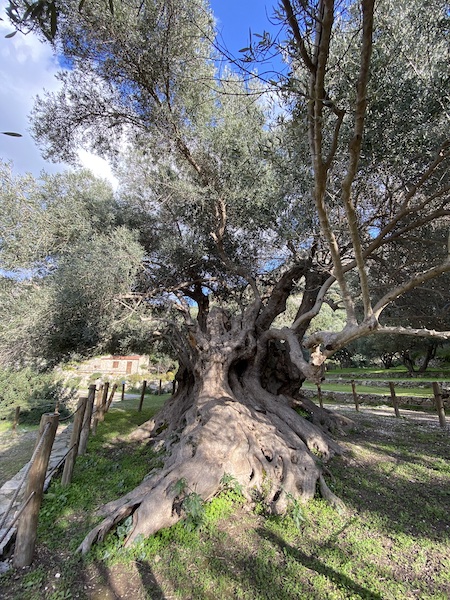 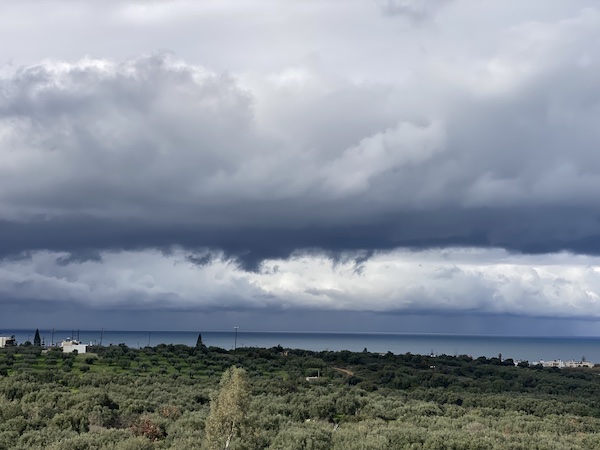 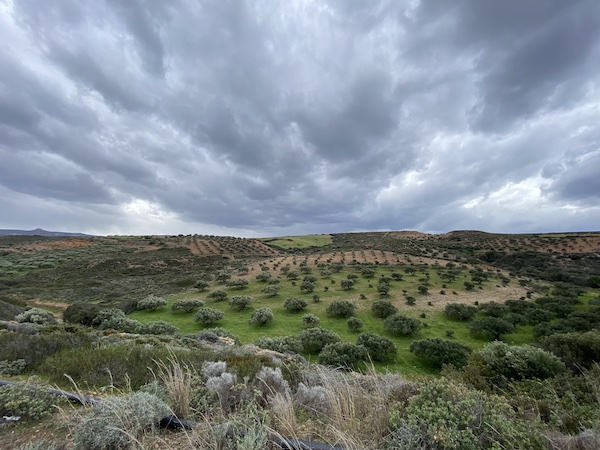 Archanes, where you think you are in Tuscany. (Photo: Chiara-Sophia Coyle.) 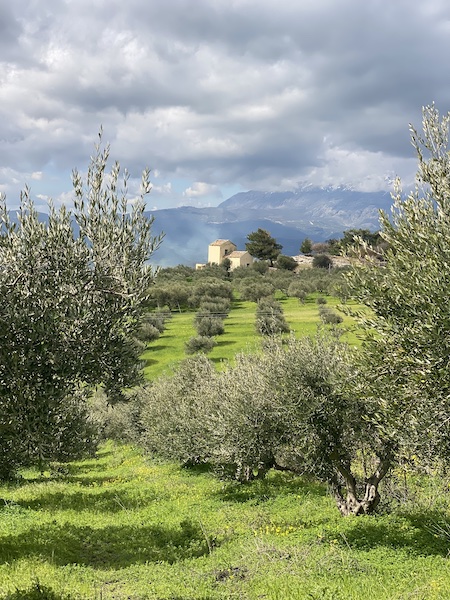 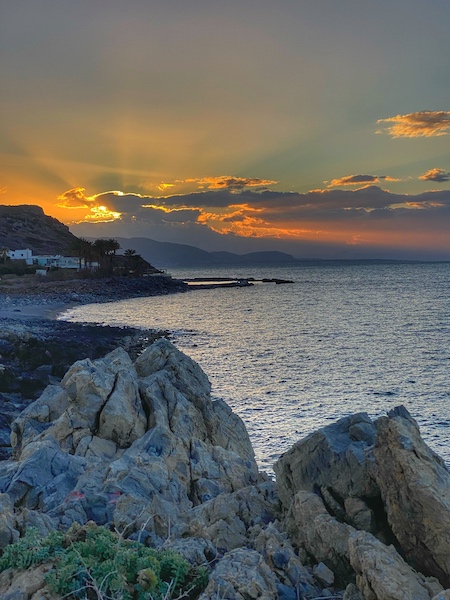 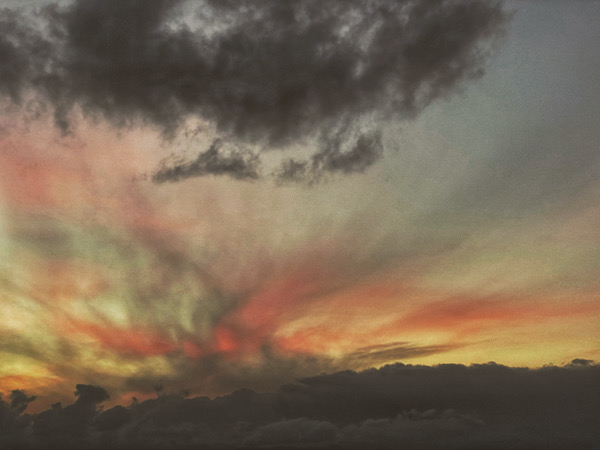 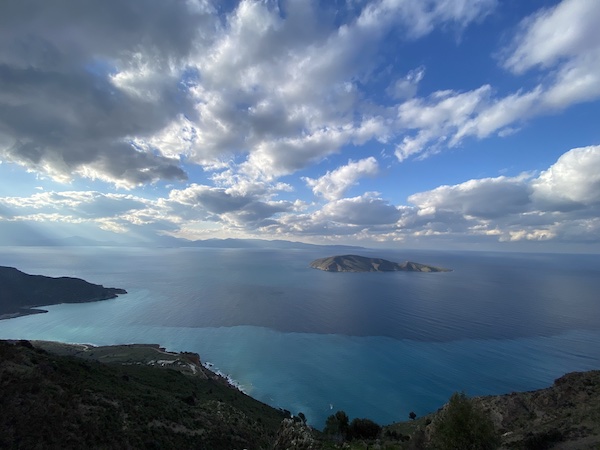 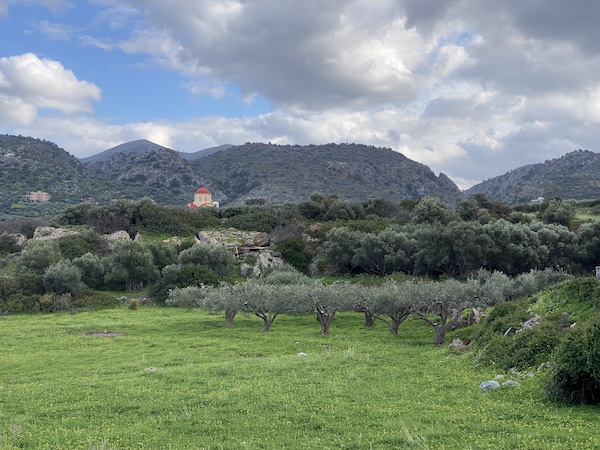 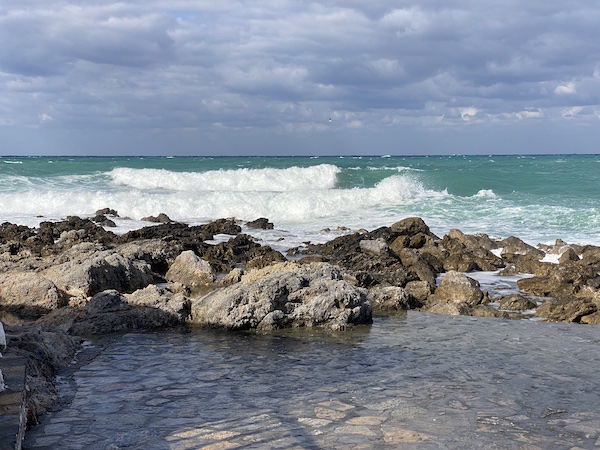 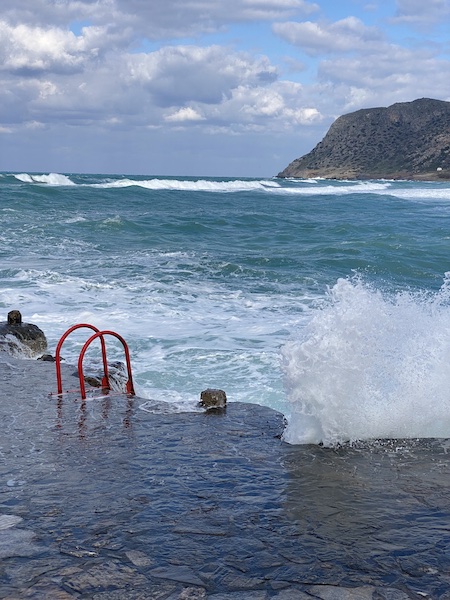 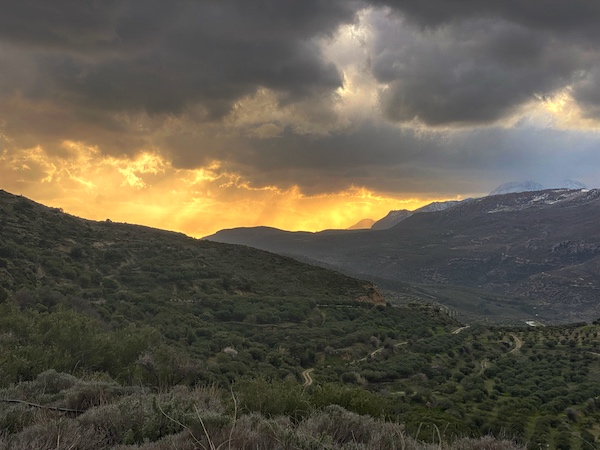 Mountain sunset on the way to Ierapetra. (Photo: Chiara-Sophia Coyle.) 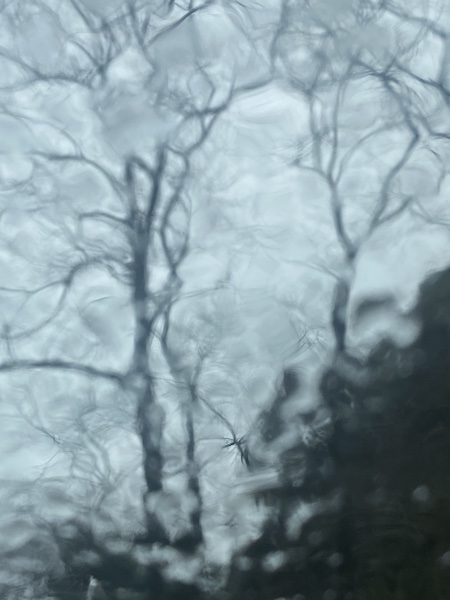 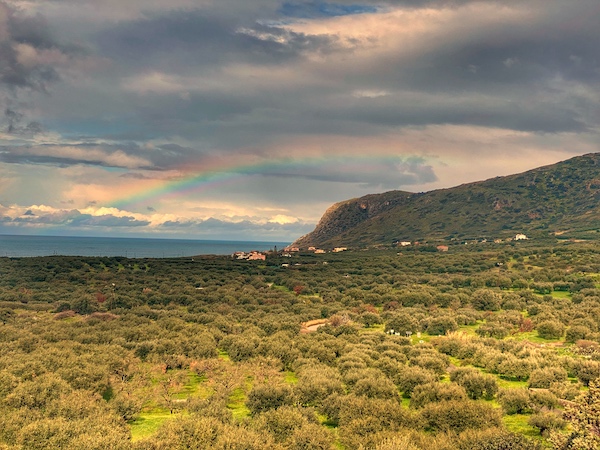 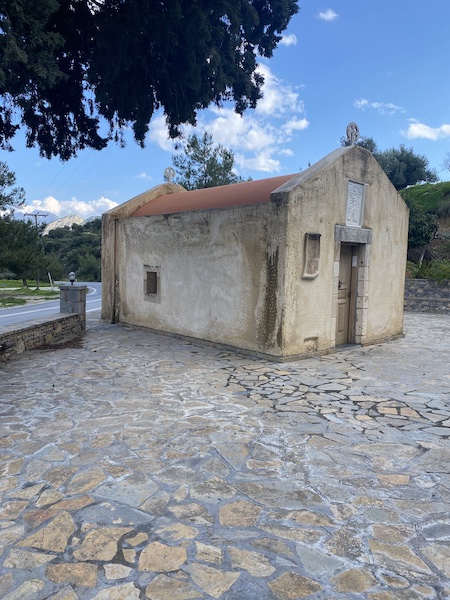 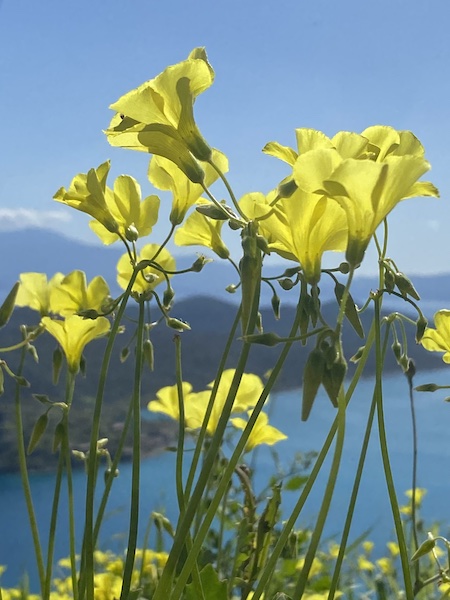 Born in the United States in the 1960s (then, transplanted to a very small, remote Greek island at the age of three months); brought up in a bilingual and frequently culturally conflicted environment; repatriated to Homeland No. 1 some 25 years ago; descended from four generations of photographers, Chiara-Sophia Coyle was acquainted with photography from an early age; always pursued by her mother, Rolleiflex at the ready, recording and sharing scenes of family life with absent grandparents and her children's working-at-sea father. Photography became Coyle's own escape as a young teenager. Kodak Instamatic in hand, the sound of the twist and the advancement of the film music to her ears, she began exploring all the elements of the Aegean: water, light, white, blue. While never an income generator, photography is what kept the artist sane as she navigated the challenges of single parenting, and endured the endless longing and aching for Homeland No. 2. Experimenting, early, with Emulsion Transfers, Coyle moved on to printing in her own dark room; then, to digital and iphoneography, constantly experimenting and exploring the new. Global travel presented opportunities to further discover, document, and exhibit, most recently in Oakland, California. Still based in Oakland, Coyle continues to travel, photograph, and work with what feeds her soul, wherever she may be: the people, the water, the reflections, the abstract. Her current art may be found on Instagram (#chiarasophia1); contact her at chiarasophia@gmail.com. (Author Head Shot Augment: René Laanen.)
View all posts by Chiara-Sophia Coyle →
This entry was posted in Uncategorized. Bookmark the permalink. Follow any comments here with the RSS feed for this post. Both comments and trackbacks are currently closed.