“In the YouTube era, we bear witness in near real time to what ISIS is doing to our shared history. Culture expressed in stone, a past preserved, simply ‘has to go’ for such barbarians. The destruction of ancient architectural sites and works of art, in this era of greater sensitivity to cultural preservation, comprises a unique shock to the senses and the conscience. But ISIS, in its iconoclasm, draws on a rich, long tradition of destruction which is neither specifically Islamic nor particularly typical to the region.”—Alexander Billinis

“Buildings are not political but are politicized by why and how they are built, regarded and destroyed.”―Robert Bevan, “The Destruction of Memory: Architecture at War” 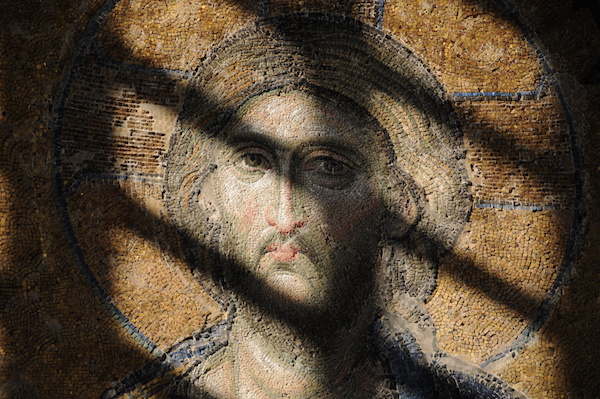 CHICAGO Illinois—(Weekly Hubris)—12/14/2015—In the YouTube era, we bear witness in near real time to what ISIS is doing to our shared history. Culture expressed in stone, a past preserved, simply “has to go” for such barbarians. The destruction of ancient architectural sites and works of art, in this era of greater sensitivity to cultural preservation, comprises a unique shock to the senses and the conscience. But ISIS, in its iconoclasm, draws on a rich, long tradition of destruction which is neither specifically Islamic nor particularly typical to the region.

Removal of a population and/or its extermination is one thing; the dead have difficulty telling tales and those expelled, often enough, over the generations, assimilate elsewhere as traumatized refugees doing their best to get on with their lives.

But the leveling of monuments, temples, sculptures, and entire cities is a unique act of “disappearing” from consciousness an entire people’s legacies.

While I am open to the concept of spectral presences, and indeed I may have conjured them up in my mind at specific historical sites, still they lack the eloquence of the standing edifice.

As a result, in lockstep with the cleansing of peoples comes the removal of monuments.  When married to religion, the crime of monumenticide often receives divine sanction (or is it absolution). The Muslims have been particularly adept at this, yet, less we forget, Christians too destroyed plenty of sites and monuments of the pre-Christian era, with a zeal the ISIS wreckers would have no choice but to admire.

Monument destroyers such as the medieval Christians who defaced to-them “pagan” temples and sculpture, the Taliban, who dynamited the Buddhas of Bamiyan, and ISIS, which broadcast its demolition of Palmyra’s Arch of Triumph are just a few avatars of this sanctimonious breed, using gunpowder, fire, bulldozer, and/or sledgehammer (depending on the era), but there are other, more subtle versions of monumenticide. 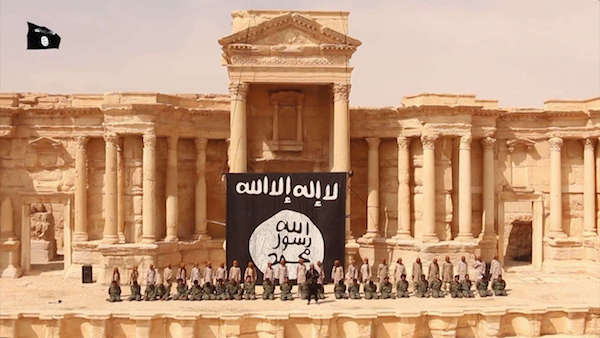 ISIS “erases” both the living and the legacy of the dead, in Palmyra.

The most common subset is, for lack of a better word, “Janissarization” of a monument.

The term (which I’ve just coined) derives from the Ottoman Turkish Janissary (Yeni Cheri) Corps of soldiers, which comprised forcibly conscripted Christian Balkan youths, brought up in Islam and trained as slave-soldiers for the Turkish Sultan. Thus, a “Janissaried” monument is one usurped and then “modified” for one’s own, different use.

The most obvious example of a Janissaried edifice is, of course, Hagia Sophia (Ἁγία Σοφία) in Istanbul. For nearly a thousand years, the church was the holiest temple of Orthodox Christianity, but the day after the Fall of Constantinople, in 1453, it was converted, by the conquerors, into a mosque. The Turks added minarets, and shrouded in plaster some of the finest mosaics in Christendom. This act was repeated thousands of times throughout Asia Minor and the Balkans, as many Christian edifices were “forced to convert.”

The converse happened as well, as mosques became Christian churches, but this was far rarer. In my travels, I have encountered only four: two in Andalucia, Spain, one in Pec, Hungary, and one in Kavala, Greece. It was, rather, the rule that Muslims converted Christian edifices. Though Muslims were not, of course, the only ones to do this.

Consider the Classical Temples “converted” to Christianity, looking no farther than the Parthenon itself. Consecrated to the Greek goddess Athena (and, later, the Roman Minerva), in Byzantine times the Parthenon became a church dedicated to the Virgin Mary. In 1460, following the Ottoman conquest, the Parthenon became a mosque. In the 1830s, the Greek government, in a nod to the original intent of the builders (and to the new Greek state’s overriding wish to be seen as a direct successor to Ancient Greece) the Parthenon became once again, simply a monument to the Ancient Greeks’ architectural and aesthetic genius, and the spiritual connection to Athena, rather than successors, was emphasized.

That is why, given a hard choice, I always prefer Janissarization to Monumenticide.

Like many medieval Janissaries, repurposed monuments can always “return to the fold.”

Witness the hundreds of churches in Greece, Serbia, and Bulgaria that were mosques in the Ottoman era but have now been “returned” to their original flocks in regions where Christian Orthodoxy is now ascendant. If once Janissaried, at least these edifices remained for the spiritual and aesthetic appreciation of the ages, something that any deity should prefer to wanton destruction.

Consider, again, the most famous Janissaried monument, Hagia Sophia. A mosque for nearly 400 years, since 1935 it has been a museum. I can fault the Turkish Republic for many things, but I deeply respect the wisdom they showed by making this sublime structure a secular site, where all can wonder at and wander throughout its splendor. 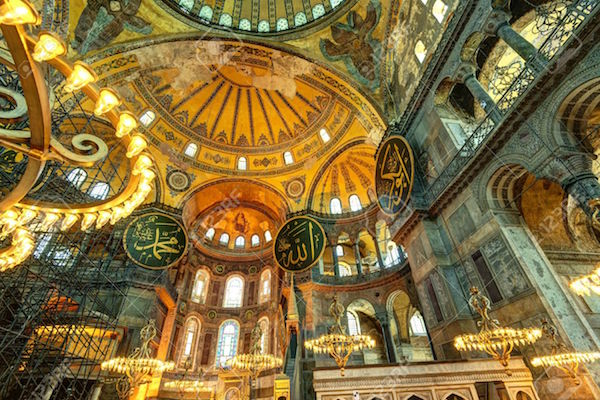 In addition, art historians have now peeled back the plaster obscuring the Byzantine mosaics from view. Christian or not, religious or not, there are few works of art I know that rival the mosaic of Jesus, whose subject appears so lifelike as to be drawing breath. Such otherworldly beauty must be protected and revealed, and while this “Janissary” has not returned to the fold, at least the edifice now stands open for all, of any creed, to enjoy.

Sadly, however, there are many in Turkey, often enough allied to the would-be “Sultan” President Erdogan, who wish to reverse this more holistic treatment of key monuments and structures, returning them to purely Islamic uses—despite their clear, documented, and acknowledged non-Islamic origins. This “Edifice Complex” has also led Erdogan to a feverish building campaign in Turkey—reflecting a megalomania and insecurity typical of tyrants, and likely to overheat the Turkish economy. While this is a far cry from the sledgehammers of ISIS, it stems from the same Edifice Complex—an inability to respect the past in building the future. The fate of so many structures, and those who dwell within or around them, is in the hands of small, powerful men with outsized egos.

Architecture tells tales in stone, often much more eloquently than those recorded on paper, and that is why, so often, they are destroyed or altered. No one wants a little thing like the truth to interfere with their myth-making. This is why the crimes-against-the edifice of ISIS are so repugnant, and why we must fight to preserve stone as well as flesh . . . because stone stands as a permanent testament to what mind, heart, and flesh once wrought.

Note: The first image above is of the Deesis Mosaic of Jesus (c. 1261), Hagia Sophia, Istanbul, Turkey; the image of ISIS executing 25 Syrian soldiers and then destroying an ancient edifice at Palmyra, derives from BNONews.com http://bnonews.com/news/index.php/news/id496 (July 4, 2015: “The Islamic State (ISIS) has executed 25 Syrian soldiers in the ancient city of Palmyra, according to a 10-minute video released on Saturday. The footage shows the soldiers on their knees on the stage of an amphitheater, with a large ISIS flag in the background. The killings, by shooting, were carried out by children, some who appeared to be less than 10 years old. Several hundred people in civilian clothing witnessed the execution. At the end of the video, an ancient building is destroyed.”)

Of interest to readers: “Robert Bevan’s The Destruction of Memory: Architecture at War,” by Tyt Hevryk.