Not Running Over Grandma: A New Way of Driving and Thinking

TEANECK New Jersey—(Weekly Hubris)—10/24/11—When I was around six or seven years old, I saw a memorable cartoon on TV. It was a Disney animation starring Goofy, that loveable and dizzy anthropomorphic, long-eared dog, usually found hanging out with Mickey Mouse and his friends. 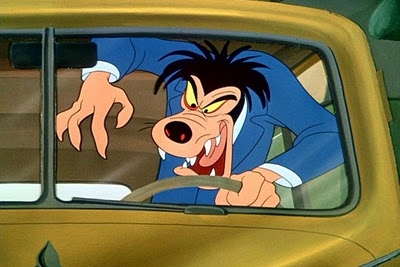 Two things were immediately odd about this singular episode: Goofy, the perennial sidekick, was suddenly elevated to being the star of the show. Even more startling, it wasn’t long before this sweet and affable doggy transformed before my innocent and unsuspecting eyes into a raging maniac!

The plot line was simple. It was a beautiful Disney suburban day with flowers blooming and birds chirping. Playing the part of the gentle and kind Mr. Walker, Goofy began his day by ambling into his garage and getting into his lovely yellow convertible.

As he turned the key and stepped on the accelerator, the engine jumped to life, growling. In the same instant, Mr. Walker morphed into “Mr. Wheeler,” a crazed lunatic, frothing at the mouth and ready to do battle with anyone and everyone.

I was aghast! This was my good pal Goofy—in what kind of world had I landed, where the sweetest friend could frighteningly become my worst nightmare??

The problem was that Goofy was now a “driver,” and the rest of the world had better watch out. As the narrator asked, “Does he think he owns the road?,” the answer was a resounding YES!

If you’ve ever been a driver or a passenger in an automobile, I don’t have to explain the basic premise for this hand-drawn morality play: when people get behind the wheel, they very often become aggressive monsters (I will concede that the men out-number the women in this department).

Now, many decades later, I understand the cartoon’s adult storyline because I have experienced many of my own moments of transformation, becoming the fearsome “Mr. Wheeler” myself.

Most of my adult life has been spent trying to understand myself and my place on this planet. My moderately rare times of obnoxious anger behind the wheel have always caught me off guard, seemingly giving lie to my finer intentions. However, I have become more and more aware of being in those snits and not so hooked by them that I can’t attempt to change them.

Recently, driving on the infamous Route 4 East en route to the GW Bridge, always a delightful and relaxing event, I found myself beginning inwardly to seethe at a slow-moving sedan in front of me that was doing the old slowing-down speeding-up brake-lights-randomly-on kind of drunken waltz. As I started to get near boiling point, because, after all, I know how to drive and I need to get into the fast lane right now and maybe I DO own the road, I caught a glimpse of the driver: a smallish older woman with a grey bun of hair and a conservative print dress.

So, this was my Driving Nemesis of the day! In an instant, my anger evaporated. I saw myself as a big bully trying to bash this sweet old lady out of the way—truly she could have been my mother and, most likely, she was someone’s mother! Even if she turned out to be some stingy cantankerous grump, she certainly didn’t deserve to be so vilified in my over-worked mind, no matter how she decided to drive her car.

This was a moment for me, a chink in my auto-response system, a sliver of a chance to wrest control away from my doppelganger, the evil “Mr. Wheeler”. I have learned that one can change nothing about oneself without first simply seeing oneself. Ta-da! There I was.

A couple of days ago, I was driving to my girlfriend’s house for dinner. I realized I was getting slightly annoyed at, of course, the slow car in front of me. I wasn’t late, I didn’t need to hurry, I would get there in plenty of time.

Wow! It felt great. My anxiety disappeared, I was relaxed and enjoying myself. And that slow car was still lazing along in front of me.

As almost always happens in this type of situation, I realized that this lesson and this solution were familiar—I had seen this scenario arise on the mat in my martial arts school, and I had come to understand the solution while teaching Aikido, the Japanese art in which I train.

In Aikido, a radically different self-defense system, we learn techniques and train our bodies to move and respond in particular ways. However, the longer I practice the art, the more I understand the importance of training the mind and the spirit, as well as the body.

When faced with an attack of any kind, I have learned immediately to “change my mind” about what is happening. Rather than simply fall into the instinctual fight-against-fight or strength-against-strength, I now can instantly change my attention to NOT fighting, to NOT doing what is expected by my opponent. The physical movements vary but the result is always a non-fight that I get to control. It may sound a bit mysterious, and it is a bit mysterious, but you can get on the mat and train and actually learn how to be different.

And for now, there is a golden opportunity every time you get in a car. Even if you’re not driving, maybe you can be reminded during your trip to take a peek at yourself and see what’s going on—you might be really surprised.

And if you are driving, don’t forget to be gentle with that slow moving vehicle in front of you. It might be someone’s mother or grandmother—or me.

Jerry Zimmerman was born and bred in Pennsylvania, artified and expanded at the Syracuse School of Art, citified and globalized in New York City . . . and is now mesmerized and budo-ized in lovely Teaneck, New Jersey. In love with art and artists, color, line, form, fun, and Dada, Jerry is a looong-time freelance illustrator, an art teacher in New York’s finest art schools, and a full-time Aikido Sensei in his own martial arts school. With his feet probably and it-is-to-be-hoped on the ground, and his head possibly and oft-times in the wind, he is amused by the images he finds floating through his mind and hands. Author Photo: David Zimand
View all posts by Jerry Zimmerman →
This entry was posted in Uncategorized. Bookmark the permalink. Follow any comments here with the RSS feed for this post. Both comments and trackbacks are currently closed.

3 Responses to Not Running Over Grandma: A New Way of Driving and Thinking