On Bended Knee at Standing Rock

“He has that sense of history that is common among those of us who are graduates of Georgetown’s School of Foreign Service. What is uncommon, and heroic, is how he has transmuted that keen feel for history, and responsibility in the light of historical knowledge, into words—and deeds.”—Alexander Billinis 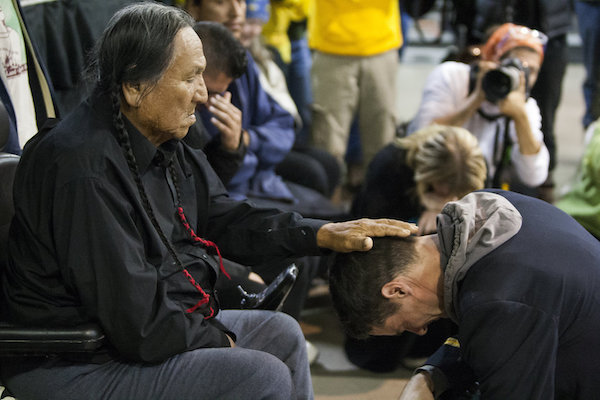 CHICAGO Illinois (Weekly Hubris)—March 2017—My hero is a friend from my university days, a year younger than I, who pledged my fraternity the year after I did. The only child of a scholarly and politically powerful general, Wes would eventually follow his father into the military. But, when I knew him, he was just another undergraduate at our prestigious, internationally-oriented university. Like me, after the fall of the Iron Curtain, Wes went off to study in Eastern Europe; he in Czechoslovakia; I in Hungary. (We also haunted The Grateful Dead in the Bay Area, rode scooters around Jamaica, and sometimes took an interest in the same women.)

After college, we went our separate ways, to different destinies in different patches of the globe. Wes went into the army for a time, in the family tradition, but found other interests outside of uniform, leaving the service far earlier than his general father.

Before the ubiquitous database of Facebook brought us back together, virtually, neither of us knew anything of the other, post-graduation; and then, post-Facebook “refriending,” most of our “likes” and comments comprised just the briefest of base-touching, plus one or two analog telephone follow-ups.

Like most middle-class Generation X’ers, I suffer from information overload and the inability to concentrate fully on any task due to the multiple, often simultaneous, items crowding my agenda. I was aware of a protest going on, through much of 2016, in North Dakota involving the path of a pipeline. I was also aware that the protestors were primarily Native Americans who were incensed by the path of the pipeline through lands sacred to their nation. Their courageous stand attracted many concerned with indigenous rights as well as the environment, in general. As related links flashed through my newsfeed, I tried to follow the story via a tiny phone while keeping my balance on a packed Chicago “L” train.

Among the supporters who braved the early winter weather of the Dakotas was a group of veterans. Again, I was only vaguely aware of their presence and efforts until, suddenly, a familiar face popped up in Facebook pictures and videos.

Wes Clark, Jr. has hardly aged. Just as he was a quarter of a century ago, he is today handsome, dignified, and well-spoken. He has that sense of history that is common among those of us who are graduates of Georgetown’s School of Foreign Service. What is uncommon, and heroic, is how he has transmuted that keen feel for  history and responsibility in the light of historical knowledge, into words—and deeds. Better to let him speak here for himself. At the head of a group of Veterans, wearing elements of a uniform and a military hat from a past age of Indian Wars, he approached the Indigenous tribal elders:

“Many of us, me particularly, are from the units that have hurt you over the many years. We came. We fought you. We took your land. We signed treaties that we broke. We stole minerals from your sacred hills. We blasted the faces of our presidents onto your sacred mountain. When we took still more land and then we took your children and then we tried to take your language and we tried to eliminate your language that God gave you, and the Creator gave you. We didn’t respect you, we polluted your Earth, we’ve hurt you in so many ways but we’ve come to say that we are sorry. We are at your service and we beg for your forgiveness.”

Wes and his comrades knelt before Chief Leonard Crow Dog, who matched their dignity by bestowing his forgiveness on the assembled veterans, placing his hand on Wes’s bowed head.

And though, following his heroic gesture, he and I pass quick messages to each other, I have not spoken to Wes about his historic apology and its greater meanings.

But the image of my friend kneeling at Standing Rock is one that I come back to occasionally, when in the grips of thinking about this new regime. Wes, eloquent, erudite, and on bended knee, is Trump’s very opposite. A bit of balance, perhaps, in a world upside down.

To buy Alexander Billinis’ latest book, The Eagle Has Two Faces: Journeys Through Byzantine Europe, or Hidden Mosaics: An Aegean Tale, click on the book covers below: 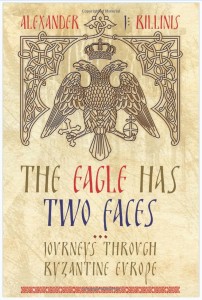 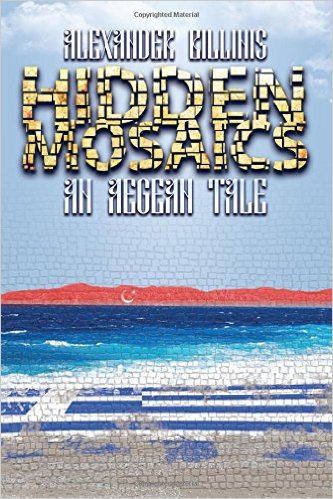 One Response to On Bended Knee at Standing Rock