“After settling in the lovely town of Duxbury, I was invited to mount a four-month solo exhibition at the Art Complex Museum of Duxbury, for which event the curator also asked me to paint some Duxbury scenes.”—Meredith d’Ambrosio 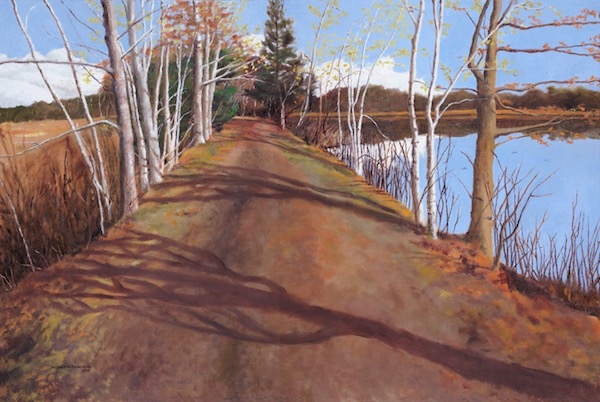 When we first moved to Duxbury, my Black and Tan Coonhound puppy Gypsy and I explored various places where we could walk safely, far from traffic. I soon discovered that my property was surrounded by two enormous cranberry bogs, flanked by woods and water. At first, Gypsy and I chose to walk around the East Street Duxbury Bogs, on the other side of my land. One day, we veered away from our normal route, keeping to our right a swampy pond where nesting swans, cranes, geese, and ducks exist in all seasons, despite the cold. We walked up a hill which led to a path lined with birch trees and English maples. Route 3 could be seen beyond the swamp, the same scruffy waterway I would observe as a youngster on the way to Cape Cod in my father’s station wagon. I imagined back then that there must have been a forest fire which had left dead tree trunks sticking up from the water. Most of the dead trees have now been cleared from the shallow pond. Each time we found ourselves on this path, I was captivated by the birches. When I finally began painting this scene, the path in the painting drew me in as if it were welcoming me into an enchanted wonderland. 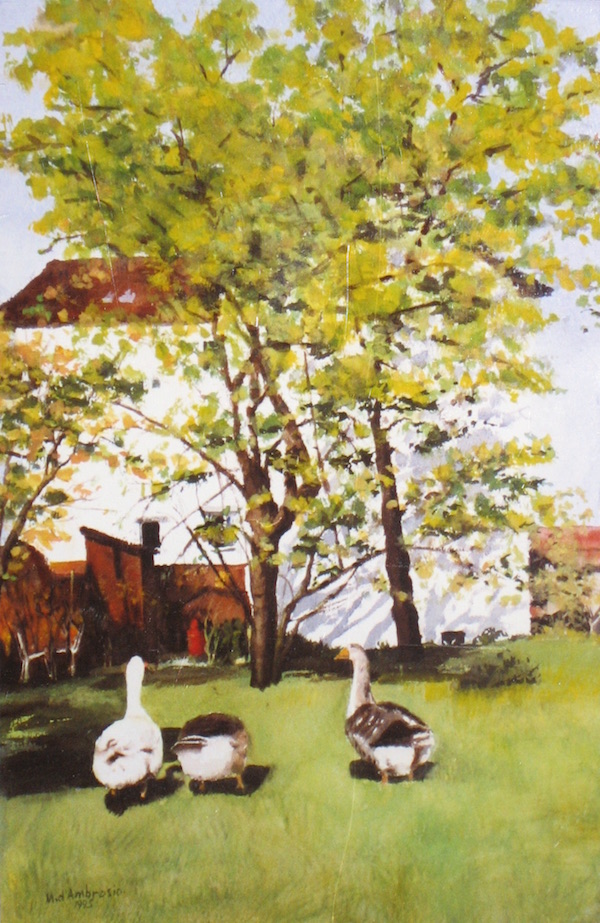 During our sojourn in the quaint, historic village of Auvers-sur-Oise, my late husband Eddie and I stayed with Hervé Czak. Our room was in the attic of the house beyond the geese. From our window, we could see a steep hill stretching far below us, reaching down to the Oise River, where stately poplars lined the long path beside the waterway. The stationary concert barge, Bateau Daphné, was docked there and waiting for us to perform on its stage that evening. 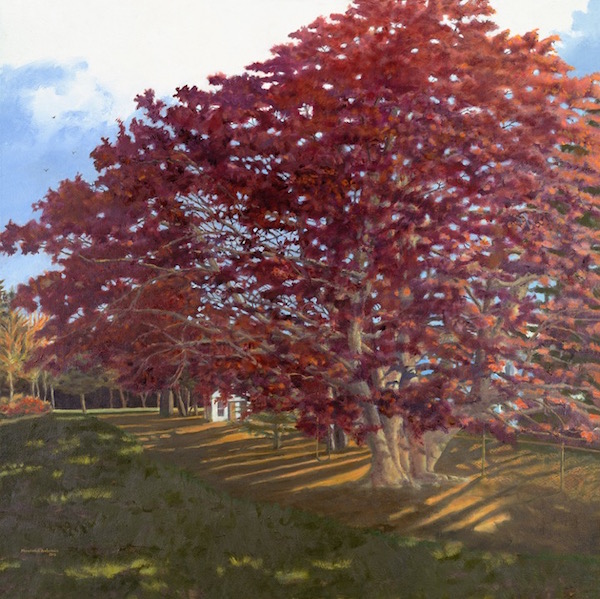 After settling in the lovely town of Duxbury, I was invited to mount a four-month solo exhibition at the Art Complex Museum of Duxbury, for which event the curator also asked me to paint some Duxbury scenes. The exhibit was scheduled for November of 2015, three years after the invitation, giving me time to search for places to portray. My first plan was to find the most unique copper beech in town, and I did. It is a giant ancient copper beech visible only in winter, when nearby trees hiding it with their full summer foliage drop their leaves. I stopped short driving home one day on Route 3A upon noticing the beech for the first time. Initially, I painted the tree in its naked, wintry state. But when spring finally arrived, and the tree was suddenly in full bloom, I realized the beech had even more character and charm than I had thought possible. It was truly majestic, and I could not resist painting it in its full regalia. Still, I was relieved that the skeleton of the tree could still be glimpsed through its leaves when the second painting was completed.

6 Responses to Out of Doors