BURLINGTON North Carolina—(Weekly Hubris)—5/30/11—Three bright spots shining vividly in my aging mind from my days in the US Air Force date from my time at Keesler Air Force Base in Biloxi, Mississippi. During my tours of duty there, Bob Hope and Louis Armstrong came to entertain the troops in the early 1950s.

Bob Hope and his entourage mounted a makeshift stage on the baseball diamond, opening with Hope’s signature song, “Thanks for the Memories.” He’d donned a flight jacket and a cap glistening with the Air Force insignia and golden braid, and moved quickly to set his show in motion. 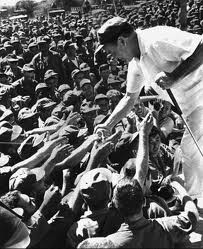 Thanks, Bob, for the memories

His advance team had obviously picked up tidbits about the base commander, hot spots in town, including a few of the dens of iniquity (of which there were many), and details about how Biloxi, a pleasure ground as wet as the Mississippi River, flaunted the laws in an otherwise bone-dry state.

These tidbits spiced his monologue, drawing chuckles when he said that the base commander had a tough time keeping the troops from being fleeced by one-armed bandits (slot machines) and illegal gambling dens downtown.

He brought with him one of the starlets of the time—her name escapes me—and she figured prominently in his skit with her, a bit of muted naughtiness filled with double entendre.

Clever and laugh-provoking as the skit was, it had far less impact on us than the teasing gestures of the starlet when she left the stage to wander among the first few rows of the gawking airmen. She tousled a few heads of hair, pinched a cheek or two, and tugged on a few noses. What had been hot testosterone among these youthful airmen boiled over into lusty cheers as she strutted back to the stage. Here was cheesecake so near and dear that it shatteringly upstaged Hope. Not that he seemed to mind. It was part of his act.

He was out to give the troops a charge, to relieve the boredom of their studies and drills, to bring a little sexual fantasy into their lives.

As the show closed, we sang along gratefully with him, “Thanks for the memories.” 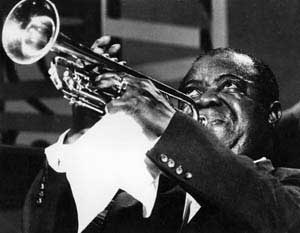 He brought his band to entertain the troops—and entertain us he did, with vigor, passion, and inimitable style but, more important, with robust humor, good will, and glistening sweat.

He threw himself so wholly into his singing and playing that he seemed to exude and embody boundless energy. He moved about the stage, not in a strut, not as an authentic figure in a minstrel show, not as a professionally choreographed singer following some rehearsed routine (like Michael Jackson), but as a man going where his music led him—to the front of the stage to be closer to the

troops, among his players to highlight their solo moments, to fetch another handkerchief from a stage flunky to mop his brow.

His eyes sparkled as they sank deeper in his face, his cheeks ballooning with air as he blew his horn. And what sounds came from that instrument! Vibrant and catchy when he played Dixieland, soft and tender when he shared a love song, smooth and stylish when he turned to a piece from Tin Pan Alley, warm and cordially welcoming when he told Dolly that she was back “where [she] belong[ed],” and jubilant and heartfelt during a rendition of a spiritual.

I’m hearing his “When the Saints Go Marching In” as I write these words, as well as an aging brain can recall his singing nearly 60 years after hearing Satchmo do it. A treasured moment for sure, one I like to rekindle by listening to a recording of his best songs. I hear his gravelly voice, see his barrel chest heave and swell, follow his march across the stage, and draw comfort from the joy streaming from his face.

The saints do indeed appear joyful as they fall in place behind this jovial Pied Piper. Such is the working of my imagination. Surely, Satchmo plays first chair in Gabriel’s band of trumpeters, and heads up otherworldly processions, New Orleans style.

The man and his horn, the man and his songs, the man and his stage presence—what a gift he brought to the hundreds of young airmen he came to entertain in Biloxi . . . a city that would have done its utmost to “keep him in his place” had he tried to dine or sleep there.