Long Island New York—(Weekly Hubris)—3/28/11—People often ask me how old I am. That either means that my cherubic face doesn’t match my withered sardonicism, or that I’m in the midst of doing something that a grown man isn’t likely to do outside an Adam Sandler film.

I have a new, more concise answer: I’m old enough to have worked for Buddy Morrow. 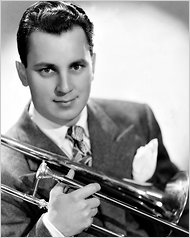 He was my boss for just over seven years, and was, with all due deference to the fellow in the beer commercials, the most interesting man in the world . . . well, at least mine. Survivor of multiple cancers, lover of jokes, food and dogs, world-traveled musician, legend, sage, vicious poker player—Buddy was all of those, and so much more.

In his heyday, Buddy was arguably the greatest trombonist of a generation. According to a mutual friend, Slide Hampton once declared him to be the best, only to be grilled for it by the bebop aficionados in the room. “You didn’t ask me who the greatest JAZZ trombonist is,” Slide countered. “You asked me who the greatest TROMBONIST is, and THAT is Buddy Morrow.”

When I started working for Buddy, he had been leading the Tommy Dorsey Orchestra for over two decades. Cancer had robbed him of his salivary glands; he used to use synthetic saliva that he sprayed into his mouth (“Ninety percent water, 10 percent fun,” he used to tell the audience after a spritzing). His chops were certainly not what I had heard on the recordings of yesteryear, but he still got around on the trombone better than most guys ten years his junior. His wit, I was told, was as sharp as ever.

Buddy was 84 when I met him. I was 28, and had just finished Grad School I—The Easy Part.

I’ll never forget my first gig with the band. It was a total nightmare, a fuster-cluck of the highest order.

I was playing lead trumpet (if you’re not hip to big band hierarchy, then imagine that the quarterback of the horn section is reading the playbook for the first time during the season opener); the singer was drunk, or needed to be drunk, or wasn’t drunk enough, and it showed; the bassist was rushing like a laden freight train rolling downhill; the pianist, another rookie, was in complete shell shock, neither comping over the intended chords nor making his solo entrances (I can still hear Buddy shouting at him, “Play something! Anything! Jeeeeee-sus . . . .”); the road manager was sitting right next to me, and—thanks to the four-alarm three-ring pandemonium breaking out all over the bandstand—he didn’t even have time to properly roast me for my performance.

All these years later, and that first show is still the most epic of failures I have witnessed. Buddy took it in stride. We saw neither hide nor hair of that pianist again.

Never has a man loved Chinese food the way Buddy did. Put him in the middle of nowhere, blindfolded, and Buddy could find a Chinese restaurant (like Charlie Sheen sniffing out a cocktail or any Lohan seeking a photo op). On a stunning autumn day in the Shenandoah Valley, some of us stayed on the bus to hit a Chinese buffet with Buddy after the rest of the band had been deposited at a cluster of fast food joints. Our lunch hour was running short, and a few of us started to wonder aloud if we might get a tongue-lashing from the road manager for being late. Buddy overheard us and, pointing emphatically at the parking lot with his egg roll, said, “How can we be late? It’s MY damn bus!”

I had played with him the Friday before. He was 91, and frailer than ever (Buddy was always a big guy; three separate bouts with cancer put an end to that). He was pushed out in a wheelchair to start the show and played sparsely, an oxygen tube in his nose the whole time. He joked with the crowd as always. They loved him. Nobody could charm an audience like Buddy.

I wheeled him off the bus into his house after the gig that night, gave him a hug, and headed on down the road. It was the last time I ever saw him.

Buddy’s doctor kept him off the Saturday gig, a hit-and-run down to Ft. Lauderdale. We played the show and high-tailed it back north, through the night. I boarded a pre-dawn flight from Orlando to my Sunday afternoon gig in Maine. The ensuing day played out like some surreal festival documentary, filtered by my near-sleepless stupor. To insult my condition, I was playing with a band full of H.I.D. (Hipsters In Denial) who, despite my weary begging, decided to stop and visit on the way home, rather than get me to the train in time to sleep in my own bed before the next sunrise. I crashed on the bass player’s sketchy white couch, its sordid history spelled out in stains visible even in the dark.

The first train out of Brooklyn (where else would a band of H.I.D. live?) on that rainy Monday morning chugged into my tiny Long Island hamlet six minutes too late to kiss my wife before she left for work, much less get a ride home from her. I slumped down the hill from the station through the cold September drizzle like some defeated Hemingway character, dragging suitcase and trumpet behind me like dueling anchors, body and mind numb from an Odyssean weekend.

Dan, the bus driver, called at 7:39 a.m., after I stumbled through the door but before I could slough off my wet clothes and collapse into bed.

“Buddy just had a heart attack,” he said. “He didn’t come back from this one.”

After another 13 hours filled with phone calls and emails to current and former band members, I honored Buddy with a glass of Irish whiskey and fell into bed, crying myself to sleep in my wife’s embrace as it all finally sank in.

The band plays on. We still have gigs on the books and I intend to keep us out as much as the market will bear, playing for the crowds that Buddy used to charm, and for their children and grandchildren (yes, I DO see cause for EXTREMELY GUARDED optimism about the future of big bands).

We pay homage to Buddy at every gig, still play his hits, still tell his jokes, still revel in his stories on the bus rides, still love every minute of it. The people still love it, too.

Buddy’s memorial was last weekend. We all gathered in Orlando to laugh, tell stories, reminisce about the road, and remember the life of an incredible man.

After the memorial, a handful of us had Chinese for dinner. We took our sweet time.