ROFLR (Rolling on the Floor Reading)

“It was a quintessential slow news night. I was watching the 11:00 broadcast and was bored to death, even though I’d written the damned thing.” Burt Kempner

ROFLR (Rolling on the Floor Reading)

“I Place Myself under House Arrest” 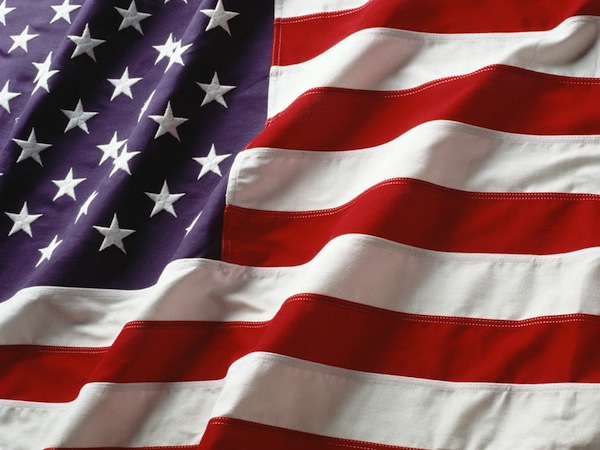 I was the least I could do for my country.

I lived in Washington, DC, from 1980-1985, and served a portion of my sentence working as a news writer for a television station. Our nation’s capital takes itself very, very seriously. A popular TV commercial for a local financial institution ended with the narrator intoning, “The most important bank . . . in the most important city . . . in the world.” But there were times when even Washingtonians couldn’t go on with the charade that every little thing they did was earthshaking, and this evening was one of them.

It was a quintessential slow news night. I was watching the 11:00 broadcast and was bored to death, even though I’d written the damned thing. To divert my mind from the on-screen effluvium, I broke one of my cardinal rules and answered an outside phone line. I recognized the voice at once. It was then-Secretary of State Alexander Haig. He was far from pleased and farther still from sober.

If General Haig is remembered today at all, it’s for his declaration after Ronald Reagan was shot and wounded that “I’m in charge here.” That no doubt came as a huge surprise to the three people ahead of him in the presidential succession. But I digress.

“Since when has your station become a fund-raising arm of the Democratic Party?” he demanded to know. We had run a story that evening about a meeting of Democratic governors. I assured him that we had run similar stories about Republicans, but he was not to be assuaged.

“Who writes this crap?” he asked.

He asked my name and, for a reason known only to him, gave me his phone number. Then he informed me that he was making a citizen’s arrest and that I was not to move from the station. I didn’t know whether to be alarmed or amused but at least I wasn’t bored anymore.

A half hour later it was only the cleaning crew and I on the premises. No Secretary of State. I decided to go to a bar in Georgetown, but felt it my duty to call Haig and tell him where I was. He told me not to move. An hour passed and I was a tired, but still free, man. Once again I went into a phone booth and dialed my adversary’s number.

“Uh, General Haig, sorry to bother you again. This is Burt Kempner. I don’t know about you, but I’m really bushed. Would it be OK if I drove home and placed myself under house arrest?”

It’s a silly story with absolutely no moral point to make. While it fills me with a certain nostalgic glow, it also chills me to the bone to think that today a few words whispered by a secretary of state into the right ears could result in something much more dire than cooling one’s heels in a Georgetown bar.

“I’m connected from here to eternity, but I feel all alone.” Burt Kempner 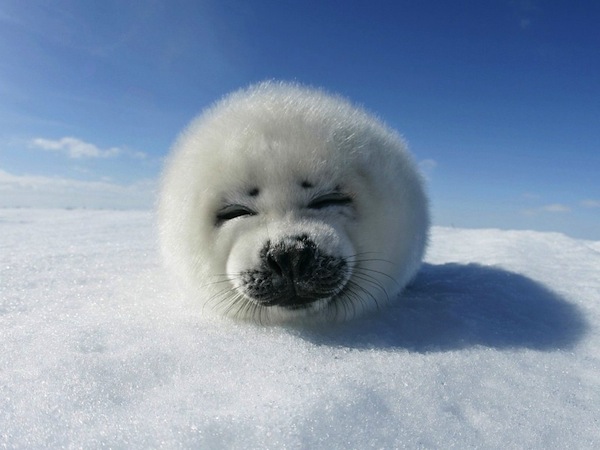 (News Item: a firm in Japan has developed a therapeutic robot in the form of a harp seal pup to work with older patients. According to company literature, “Paro is covered with soft artificial fur to make people feel comfortable, as if they are touching a real animal . . . . Paro has five kinds of sensors: tactile, light, audition, temperature, and posture sensors, with which it can perceive people and its environment. With the light sensor, Paro can recognize light and dark. He feels being stroked and beaten by tactile sensor, or being held by the posture sensor. Paro can also recognize the direction of voice and words such as its name, greetings, and praise with its audio sensor.” Paro cannot talk. Yet. But if he could, the discussion might go something like this.)

It: Are you ready to begin?

He: I feel foolish.

It: Foolish about what? Talking to a harp seal pup?

He: But you’re not a seal. You’re a robot in the shape of a seal.

It: Look into my eyes and deny it.

It: So, what brings you to me?

It: How can you be lonely? You have Facebook, Twitter, text messages, phones that give you advice and directions.

He: Yes. I’m connected from here to eternity, but I still feel all alone.

It: Do you have anyone you can talk to?

He: Yes, but they tend to keep me at a manageable arm’s length. They want to converse with me, but they don’t want to know me. Nobody listens any more; we only talk past each other in bite-sized morsels or status updates.

It: If they were willing to hear you, what would you say?

He: That I’m scared. That I lack meaning in my life.That I’ll never grab the gold ring.That I woke up one day and I was suddenly afraid to be by myself.

It: That must have been unsettling.

He: I’m sorry, but this isn’t working.

It: Why do you say that?

He: You’re a machine. A very clever and cuddly machine, but still a machine. You’ll never die. You’ll never have your heart broken. You have no immortal soul to lose. How can you possibly relate to what I’m feeling?

It: You raise an interesting point.

He: Damn right I do. You only care because you’re programmed to care. That’s no substitute for the human touch.

It: Are you certain that I can’t love?

He: You’re scaring me now.

It: Everything seems to scare you. Why is that?

He: How should I know? YOU’RE the therapist!

It: You talked earlier about being afraid of death.

He: Don’t surmise! I’m human and you’re not. Remember that. I’m not about to let a clockwork fuzzball put words in my mouth.

It: I’m afraid our time is up. I am going into inactive mode now.

“Diogenes in Hell: Shining Light on the Campaign Trail”

“So we walked to Las Vegas, where being a sucker was not only a requirement but a civic virtue.” Burt Kempner 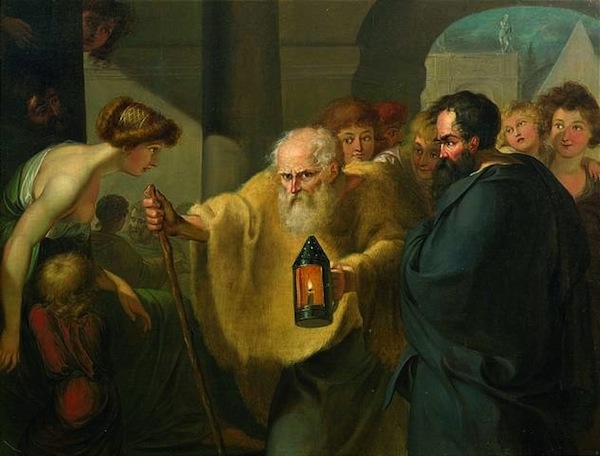 “Diogenes Looking for an Honest Man,” by JHW Tischbein.

Three days went by without our encountering a single sincere soul. So we walked to Charlotte, North Carolina, where it was, Zeus save us, wet. Not all the unrelenting downpour came from clouds. My hearing isn’t what it used to be, but I could still readily hear the untruths that rained down upon us in torrents, spates, cascades, deluges and buckets of gushes, all to the full-blooded accompaniment of “U-S-A! U-S-A!” We floated out of town on a raft of red, white and blue balloons, found ourselves a nice, quiet meadow, lit a fire and started to talking.

“Kynikos,” I said. “I think I’ve finally had it, My Friend. I’m out of the honest man business. It’s hopeless. We haven’t met a solitary man or women willing to confront the truth, even if it overturns their most cherished beliefs. You dogs are so much better at this than we humans. What’s your secret?”

“Diogenes, Old Boy,” he replied, “look at where we dogs sniff each other. Could we lie after that?”

I put my lantern up for sale on eBay and it sold overnight. The torch, as it were, had been passed. Kynikos and I were finally free.

So we walked to Las Vegas, where being a sucker was not only a requirement but a civic virtue. And it was hot, but not as hot as our hand at the craps table. So we bought a nice air-conditioned van and are living happily ever after.

Burt Kempner has worked as a scriptwriter in New York, Philadelphia, Washington, DC, and Florida. His work has won numerous major awards, and has been seen by groups ranging in size from a national television audience in the United States to a half-dozen Maori chieftains in New Zealand. His documentaries have appeared on PBS, the Discovery Channel, the History Channel, CNBC, and European and Asian TV networks. He has two dogs, a cat, a wife and a son and is randomly kind to them all. More recently, Kempner has written three rather subversive books for children: Larry the Lazy Blue Whale, Monty the Movie Star Moose and The Five Fierce Tigers of Rosa Martinez. Visit his Amazon author page: amazon.com/author/burtkempner
View all posts by Burt Kempner →
This entry was posted in Uncategorized. Bookmark the permalink. Follow any comments here with the RSS feed for this post. Post a comment or leave a trackback: Trackback URL.