HILLSBOROUGH, NC—(Weekly Hubris)—12/20/10— Many books have impacted my life, some heavier than others, none heavier, I now realize, than Rachel Carson’s Silent Spring. Growing up on a Blue Ridge farm and living close to animals had taught me the interconnectedness, the symbiotic relationship, of men and beasts of burden. But I’d given no thought to the sprays we’d used to knock off bugs, chase off flies, control pests, or put a damper on the growth and spread of weeds. Bugs, flies, weeds, nuisances all, the quicker killed the better. Or so I thought, along with countless other farmers across the nation.

But at a price, Carson taught me to know; the most disturbing to me, the silencing of birds. Their food chain depended heavily upon bugs, worms and seeds. In eating them, birds ingested all manner of chemical poison.

As a farm boy, I enjoyed roaming the pasture of my grandfather and listening to birds, my favorites being bob whites, which during my teen years seemed plentiful. To their distinctive call, I whistled my best imitation, often enjoying their return call and marveling in their flying in closer to check me out, or so I thought they were. It could have been their insistence on protecting their territorial turf. 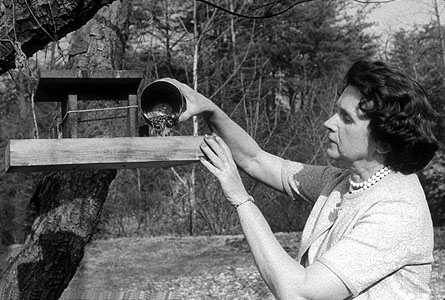 Now, when I wander over that same pasture, some acreage of which has passed down to me, I hear no bob whites, carry on no conversations with them, no longer marvel in their approach to have a closer look. Whether the silence results from pesticides or hunters’ shotguns, I know not. I do know my world has shrunk measurably over that span of time. These companions of field and forest have yielded turf to turkeys, foxes, and coyotes, none of which relish conversation.

With a far different bird, a cardinal, I once more enjoyed conversations, when, upon retiring, I moved to Hillsborough, North Carolina, and spent considerable time outdoors. This brilliantly colored Tar Heel sported a call I could fairly well imitate and, pre-empting the role of Doctor Doolittle, I engaged in exchanges with cardinal after cardinal, year after year. Like the bob white, the cardinal often flitted in for a closer look at its would-be imitator. I suspect a similar motive underlay its approach. “Who dare invade my territory?” it must have sung in notes I was too dense to interpret.

Stupid or not, I cherished its two-three-or-four-note chatter and the songs of more than a dozen other species of birds coming to feed and/or bathe in my backyard. Indeed, the place was a virtual aviary, ranging from the perky Carolina wren to an always hungry red-tailed hawk. Besides many kinds of sparrows, I hosted chickadees, titmice, juncoes, gold and purple finches, nuthatches, warblers, indigo buntings, rose-breasted grosbeaks, rufous-sided towhees, bluejays, and cowbirds, to list the ones I spotted regularly.

My backyard by intent was bird-friendly. Knowing that a safe retreat ranked high on their list of habitats, I planted such protective trees as Leyland cypresses, and maintained a brush pile, ugly to see but a welcome retreat when a sentinel bird sounded a warning about some predatory cat or red-tailed hawk. Upon hearing the warning, off every bird flew, some to trees and nearby shrubs, but many to my unsightly brush piles. Those piles I recently torched for fear they’d make my Hillsborough home harder to sell.

The house is now on the market while I make my home in a retirement center in Burlington, NC, as those of you know who’ve read my recent essay on the move, a piece I called “Settling in to Wait for God.” The place is not bird-friendly.

Since moving here two months ago, not one songbird have I heard, nor have I seen many. The place is landscaped to please human eyes, and an unsightly brush pile would no doubt attract only kerosene and matches.

If someone in my family hadn’t given me a battery-powered clock some years back with songbirds sounding off at different hours throughout the day—and night—I would indeed be living in that songless world that Carson presaged decades ago. Yet a clock made in China and featuring well-depicted birds, and a computer chip capable of singing a dozen different songs is a poor substitute for the music of my Hillsborough backyard, with its mingled sounds, flitters, meowing cats, yelping dogs, screeching red-tailed hawks, and a choir of avian songsters.

Although among the birds depicted on that clock is a Canadian goose, I don’t consider its honk a musical treat when it sounds off. And I like to think that even Carson herself would not suffer a heart attack if some well-controlled chemical thinned out the population of Canadian geese. A flock of a dozen or more of them retired here before my wife and I arrived. Early in the morning they graze and defecate (a euphemism) on the lawn in front of us. Around mid-morning, they line up in a V-formation and head to a pond behind us, flying just at the level or our fifth-story window and honking loudly as they pass. As an Air Force vet, I admire their ability to form and maintain a formation, but as a lover of Mozart and Bach and a happy host, for a time, of a mockingbird, I wish they could take singing lessons.

I’d eagerly fork over some tuition money if one or more of them would study singing with a mockingbird or Carolina wren. Perhaps a well-coached goose could teach its fellows to give up honking and start singing. Until then, well, as far as geese go, I’d settle for a silent spring, and summer . . . .