So, What Are We Doing Wrong: On Absent Mercies (Best of “Hubris”)

“In Christian worship, in the Episcopalian tradition, the Eucharistic Host is received in one’s hands, palms up and together. The gesture in the parking lot seemed as if it were allowing some harbinger of grace and mercy to drop through the widening gap between the spread hands; or perhaps the gesture framed an emptiness where no Host was.”—By William Ramp 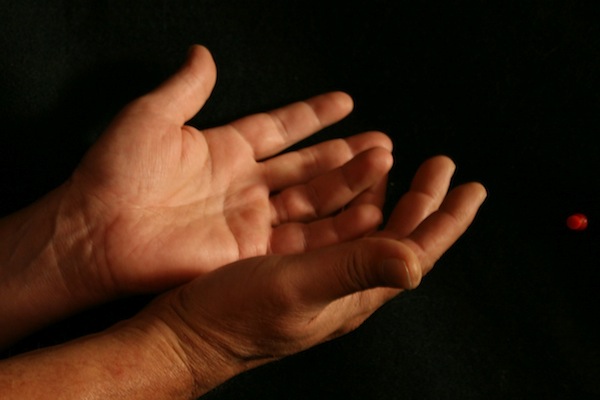 Perhaps the gesture frames an emptiness.

LETHBRIDGE, Alberta, Canada—(Weekly Hubris)—December 19, 2016—It was an insignificant moment in a busy day. I had rushed, as I often do, from my office to the supermarket in search of a couple of easy dinner items. Purchases made, I was threading my way through the parking lot when I noticed two women talking beside a car. As I passed them, one spread her hands out, palms up, with a slight shrug of her shoulders, and asked the other, “So what are we doing wrong? Like, what are we doing wrong?”

And that was that. They carried on; I carried on.

Normally, I would have forgotten such a brush-by as soon as I turned the ignition key, but it haunted me that night. Why? Because, I realized, I was hearing that question, or something like it, repeated more and more frequently. Once, I might have associated it with parental talk, perhaps about a bruising encounter with a school official, an argument with a teenager, or a sleepless and recalcitrant toddler. But now it seemed to be cropping up more often in other conversations, about work, finances, or health.

I also began to mind an uncanny similarity between the palms-open shrug I’d witnessed and another gesture. In Christian worship, in the Episcopalian tradition, the Eucharistic Host is received in one’s hands, palms up and together. The gesture in the parking lot seemed as if it were allowing some harbinger of grace and mercy to drop through the widening gap between the spread hands; or perhaps the gesture framed an emptiness where no Host was.

“What are we doing wrong?” To what do we link that question?

In 1741, American theologian and evangelist Jonathan Edwards gave a sermon titled “Sinners in the Hands of an Angry God,” in which a key sentence read as follows: “There is nothing that keeps wicked men at any one moment out of hell, but the mere pleasure of God.”

Both that sentence, and Edwards’ Calvinist theology have long fallen into popular disrepute, though much of the criticism of it, as Marilynne Robinson argues in When I was a Child I Read Books (Harper Perennial, 2013), unfairly targets statements taken out of context and made representative in ways that Edwards or Calvin themselves would not have countenanced.

Be that as it may, it’s safe to say that Edwards chose a sermon title that practically begged for negative and abusive interpretation. And generations of North Americans did grow up in households learning that they were at the mercy of a remote and forbidding God, a stern father in whose eyes they could never redeem themselves nor measure up.

In the Roman Catholic tradition—despite its vehement opposition to Calvinism—something similar obtained, if for different reasons. In French Canada, as in Ireland, Catholicism formed part of a defensive collective identity; a need to maintain a distinction from a Protestant ascendency. In the United States, Catholics marched toward demographic parity during an era in which the Church turned its face from modernism and trained its young to reject it. Such cultures of defensiveness lent themselves to strictness in discipline, insularity, and watchfulness for signs of sin. In this context, the doctrine of Original Sin often shed its merciful elements (“for all have sinned and fallen short” . . . “therefore judge not” . . . “love one another”) and reinforced a self-flagellating sense of inherent insufficiency.

None of these attitudes does justice to the breadth, depth and historical variety of either Calvinist or Catholic doctrine and culture. But narrowed and constricted versions of popular religion, however wrong-headed they might be, can develop a power of propagation all their own, as much through institutional and personal practices as through preaching.

What I am suggesting, at least as a possibility, is that a certain punitive version of Christianity gained a good deal of traction in both Canadian and American culture, Protestant and Catholic.

In Canada, it may have had more to do with propriety and place than it did in the US, but the basics were similar, and they infiltrated secular as well as sacred life: We are not good enough; we’ve never been good enough; we fail to measure up.

But, at the same time, and in these same North American cultures, an opposite attitude also grew to fruition. You can see it in the benevolent deism and bootstrap optimism of a Ben Franklin and, later, much later, in the homey wisdom of Kermit the Frog:

“Listen everybody, we’ve got nothing to be ashamed of. And you know why? Well because, thanks to Walter here we tried. And if we failed, we failed together and to me that’s not failing at all. And I don’t care what anybody says, I don’t care if no one believes in us because . . . I believe. I believe in you. And you. And you.”

We are good enough. Good enough to be anything we want to be. We can strive for our personal best; for excellence. And if at first we don’t succeed, we can get up, and try, try again.

Here, we grasp at the hem of the American Dream; of the optimistic America before rust belts and hollowed-out cities; before precarious employment and fraying safety nets. An America in which ambition and effort seemed to pay off; a Canada in which those who faltered were not left behind; a North America in which rising prosperity would lift all boats.

If those dreams have deserted many of us, we have not equally deserted them. We still operate, day to day, in a thousand small ways, on the premise that, in a good world, good people will eventually receive the reward that their efforts and their ethics merit.

Back to the women in the parking lot. When the dream deserts us, when bad things happen to good people, when good things turn bad, do we tend to switch, bewildered, from benevolence to bane, in ways that reflect the structure, if not the content of a religious heritage? When the company shuts down, the pension plan is stolen, the benefits run out, do we—without fully realizing it—return to a notion of an inscrutable and punishing god; to the idea that our grim fortune is somehow a reflection of our fault in that god’s eyes?

“What did we do wrong?” is but a short distance from “How are we wrong?”

I wonder if some of us, perhaps many of us, feel the stern gaze of new gods landing on our backs? Is it now a Market Trinity—Austerity, Rationalization, Downsizing—that convicts us, from some new throne, of not being “excellent” enough, expecting too much, being insufficiently competitive, flexible or productive?

But perhaps that plaintive question also is, in some strange way, an attempt to comfort ourselves. If we can lay blame for a lost job, unsuccessful résumés, insuperable medical bills or an un-payable mortgage on something, someone, even on ourselves, is that in some sense better than saying, “It just makes no sense at all?”

As soon as I begin to think it through, this suggestion seems absurd. Why would we do that to ourselves? But I wonder if we do, in small encounters in the most ordinary of places, on the most insignificant of days?

Perhaps, though, there’s something else in the parking-lot question: a developing sense, reinforced by saying it out loud to someone else in a similar boat, that the occupant of the throne of economic judgment is lacking in grace and mercy because it is absent; an absence that knows us not, and does not care. If so, the question might also be the beginning of another sort of wisdom, and another sort of response.

Note: The image used to illustrate this column derives from http://www.lisapetrilli.com/2011/11/21/gratitude-in-leadership-when-gratefulness-fuels-giving/

William Ramp teaches sociology at the University of Lethbridge, in Alberta, Canada. He’s bemused to find himself in his sixth decade, nursing both a long and faulty memory, and age-inappropriate attitudes. He is fortunate to be organized, inspired and kept in line by dear friends and cheerfully-irreverent children. He contends as best he can with a host of garden-variety demons, imagining that some day he will beat them all, but suspecting he really should invite them in for coffee and a chat at fireside. Though trained in academic prose, he’s returning to a love of creative and incidental writing left behind in high school. That love is now his lifeline; a way to retain a footing on new paths and to contribute to uncaged and free-range conversation. His interests tend to be intellectual, but he delights in poring over antique machinery, grafting strange sprigs onto unsuspecting trees, listening to frogs in spring, watching thunderstorms outside and in bare feet, and talking to crows and magpies. He bumbles at night around the porch-lights of culture and ideas, and gravitates to redolent old things left at the curb of modern life. He tries not to let frustration with bad politics and worse news eclipse his sometimes wayward and over-ardent affections for the things of this world. Banner(1) photo used by permission of photographer Penny McCoy: www.pennyphotographics.com; banner(2) photo used by permission of photographer Bradley Rawlings; headshot photo by Louis-Philippe Valiquete, Laboratoire d'études durkheimienne, UQAM.
View all posts by William Ramp →
This entry was posted in Uncategorized. Bookmark the permalink. Follow any comments here with the RSS feed for this post. Post a comment or leave a trackback: Trackback URL.