BURLINGTON North Carolina—(Weekly Hubris)—4/11/11—If my latent Hinduism comes through for me, the next time around I’d like to be an astronomer. Ever since my grandmother Myrtie Watson paused under a starry sky to point out the Dippers, Big and Little, I’ve enjoyed star-gazing. What a wonderful way to kick the imagination into high gear, what a challenging way to initiate philosophical and spiritual pondering, what a certain means of discovering the teeny/tiny capacity we mortals have of comprehending the immensity of our ever-expanding multiverse.

Accustomed as I was as a child to connecting dots to create pictures, I understood her explanation that early star-gazers saw figures of humans, animals, and other forms of life when they stretched imaginary lines from star to star. It was through her patient tutoring that I made out the shapes Ursa Major and Ursa Minor.

“There are many more shapes out there, Johnny,” she said. “I know only a few, but look for yourself and see what you can find.”

Child of nature that I was, I thought I could see flowers, birds, trees, and animals. Of course, it was a childish game I was playing, having no notion of recording what I saw, having no knowledge of whether I was creating an image from starsalready placed in constellations by ancient astronomers like Arato Soli and Tolomeo. Fired up as my imagination was, I fell far short of the 44 constellations named by the former, and the 48 logged by the latter in his Almagesto. At best,I could suggest only a dozen or so figures to Grandmother.

The dots to be connected spread over distances too great for my brain to form into discernible shapes, at least to Grandmother. I tired her eyes and neck muscles with my pointing hither and yon, and she found relief by saying, “It’s time, young man, for you to get ready for bed.”

Before my brain could lose itself in the blackness and nothingness of sleep,I pondered the vastness of a solar system that both so aroused wonderment and so overwhelmed me. “How did all this come to be—the earth I walked and slept on, the creatures and plants existing beside me, the planets and stars glowing above me? What force or being created it all?

Everyone I asked in Deep Gap, North Carolina, gave me the same answer—God—and told me to read the Bible. I did, but ran afoul that old conundrum about who created the first cause. “All right, so God created it all, but who created God?” Deep Gap’s response was,”You ask too many questions.”

All of this musing on my part and orthodox answers on the part of kin and neighbors came long before the Big-Bang Theory. But long after Charles Darwin and a host of other geologists and archaeologists had formulated suggestive hypotheses. As a child, I was largely left to dwell in darkness about science and scientists. If I had problems with the supernatural, abundant time on my knees and the good book in my hands would set me right. The absence of books at home and the lack of a good library at Deep Gap Elementary forced me to ponder in virtual solitude the glories and mysteries of the world beneath my feet and the starlit realms above my head.

Except for books and magazines I found at Appalachian High School in Boone, North Carolina, my most rewarding look at the wondrous firmament above my head came at the Morehead Planetarium in Chapel Hill when I was a junior.

Here hard science joined with imagination to tease me into deeper pondering, for not only were lines drawn from star to star to present an array of constellations, but information on light years and distances came along with details about phenomena I’d never encountered in my reading—black holes, for instance.

Considering the excitement stirred by my visit to the Morehead, I was surprised, well more than a half century later, to realize how wholly I’d given myself to teaching, and writing about, literature. Renewed interest came when I saw the Palomar and then the Lowell Observatory. These two facilities showed me that I had taken far too casual glances at the images captured by the Hubbell telescope. The museum at the Lowell, both well planned and equipped, could have held me for weeks. It is a magnificent teaching tool. 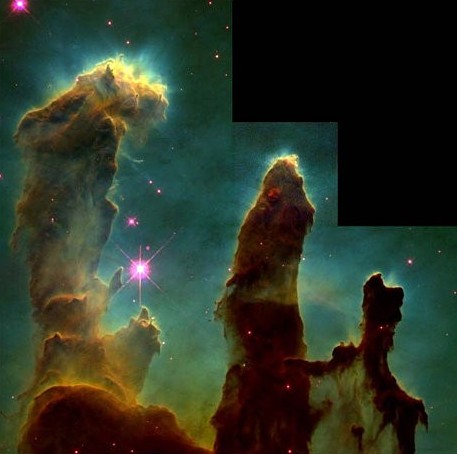 The nursery of the stars

Even better was the opportunity to peer into a large telescope at a star millions of light years away. How exhilarating, how humbling, how teasing to thought! Not just mere twinkles far, far way, but an invitation to contemplate the immensity of our multiverse and its beauties, complexity, and fate.

It’s exhilarating to know that our multiverse is still evolving, that whatever force brought it into existence is powerfully active, that it reveals no sign of an Armageddon, that it underscores our need, as humans, to continue becoming.

It is humbling yet inspirational in its insistence that mankind must find some way to reach one of those 400 recently discovered planets if humanity is to survive, for perish we must when our solar system shrinks into a black hole.

The distance and time to cover before reaching any one of them overwhelm present technology and human lifespans, of course, but are we taking the first steps by shrinking our knowledge and history to mere discs or beads, by experimenting with biospheres, cryonics, by developing means of transportation potentially capable of traveling millions of light years?

I firmly believe that no rescuing force will come galloping out of the west, or east, to spare our solar system from collapse. Supernaturalism will not save it. If mankind is not to disappear with its demise, we must be the captains of our own fate. We must be stronger, wiser, braver than Job, Jesus, Faust, Ahab, or Einstein. We must be all of them and more.