The Blue Of John’s Daddy’s Truck

“John’s Daddy was a firm believer in the afterlife. It was all that kept him going. There had to be some reason, some make-up for all of the bullshit that life threw at you. Why some assholes lived to be 90 and the most angelic people died horrible deaths at seemingly the threshold of their beginnings. What the hell?” F. Theresa Gillard 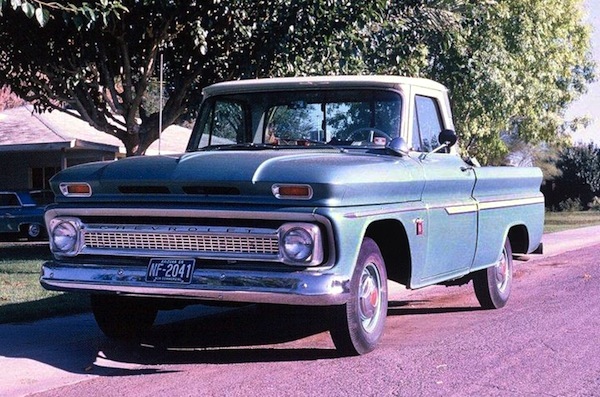 BOSTON Massachusetts—(Weekly Hubris)—8/20/2012—I wrote this back in 2001. My brother Brian and his best friend John were out in the yard talking and laughing like usual. I couldn’t hear their conversation. But, I did hear one phrase: “John’s Daddy.” Inspiration for this little tidbit.

John’s Daddy’s blue 1964 Chevy truck was all I saw when I pulled up. A strong scent of honeysuckle enveloped me as I made my way to the grave.

Death was the master of all life, until along came me. Yep, me. And, damn ‘em all to hell, if there was such a place.

Sad and strange that people had so many choices during their existence, only to end up having two pre-determined outcomes. Hmmm, heaven, or hell? To burn, or not to burn?

Me, I could care less. You spend your life believing, or not believing, and you’re gonna die either way. If I could die, I’d live as though every second was my last. Pure conjecture all of it.

Anyways, I saw John’s Daddy’s 1964 Chevy truck. A nice faded sky blue that it was. John’s Daddy was around here someplace, and it was his turn to meet me. He’d probably be lingering at his family’s plot. Only one space left there: his.

John’s Daddy had lost his entire family. Sad as it was, it just happened to now be his turn. Jerry, his wife, died three years earlier. Breast cancer took her at 40.

John died last week in his new VW Beetle. He picked it up on a Monday and was killed the next day by a drunk driver, who of course survived. John was all of 23 years old.

John’s Daddy was a firm believer in the afterlife. It was all that kept him going. There had to be some reason, some make-up for all of the bullshit that life threw at you. Why some assholes lived to be 90 and the most angelic people died horrible deaths at seemingly the threshold of their beginnings. What the hell?

Some road rage freak killed his daughter, Jessica. When the freak was not busy terrorizing paved paths, he terrorized the pulpit every Sunday at The Church of God over on Belmont Avenue, frightening believer after believer into becoming a born-again follower of the church.

John’s Daddy sat staring at the names of his family. It was Jerry’s birthday and their wedding anniversary. He put some sunflowers on her marker. Sunflowers were her favorite. She thought that they were so rebelliously beautiful.

He talked to her now. “Johnny and Jessie are here too, Honey. I come here, although here is where I feel the farthest away from you all.”

He heard something behind him. Or, did he feel a presence? He wasn’t sure which. His grief quickly turned to fear. He jerked around, knowing that there’d be no one there. No one, but me.

“Need to get that truck painted. A classic it is.”

“Don’t you just hate people who state the obvious? I do. Although, I find myself doing so frequently. But, then again, I’m not a person.”

5 Responses to The Blue Of John’s Daddy’s Truck