The Natives Are Restless

“The great plant explorers of the 18th and 19th centuries found spectacular plants growing wild here in the coastal plain of the Carolinas and Georgia. Many of these plants were collected, studied, identified, and then promoted to gardeners in Europe. Then, no longer wildflowers and weeds, they were reimported to America as fashionable garden plants.”—William A. Balk, Jr

ELKO South Carolina—(Weekly Hubris)—December 2019—Who would have thought that we nice, quiet gardening folks would get worked up to such a furious tizzy about terribly esoteric subjects like “natives” vs “exotics?” We even fight over the definitions! But get us started on whether we are threatening the earth when we Lowcountry gardeners plant Lilium auratum instead of Lilium superbum, and you’d better be ready to choose sides.

I’m not going to choose sides in that debate—partly because the sides keep moving; it is, though, a topic well worth exploring in these virtual pages. As esoteric as the issues seem, we all attempt to find responsible ways to maintain a healthy and productive environment, and to avoid unintended consequences which in the past have sometimes proved disastrous.

Just how have gardeners gone about finding and using native plants, or wildflowers—or weeds—in the garden? The great plant explorers of the 18th and 19th Centuries found spectacular plants growing wild here in the coastal plain of the Carolinas and Georgia. Many of these plants were collected, studied, identified, and then promoted to gardeners in Europe. Then, no longer wildflowers and weeds, they were reimported to America as fashionable garden plants.

Many of these returning glories are well known. One of the grandest and most admired trees all over the world is the Southern Magnolia, Magnolia grandifolia. The lovely native windflower, Anemone caroliniana, and the Carolina phlox, Phlox caroliniana, both reveal their American origins in their Latin names. The famous and beautiful Franklinia tree, Franklinia alatamaha, was found near Savannah by the Bartrams in 1765. Samples were collected and distributed among arboretums around the world, which is fortunate indeed. Since it was initially sighted in the wild 250 years ago, it has never been found again growing in its native habitat. The only examples of its existence are descendants of the pieces collected by the Bartrams in Georgia.

That pattern of exploring and discovering new things, of identifying exotic flora in exotic places, also serves to make it easier for gardeners to discover and learn about amazing new plants—including the natives—which might find a perfect place in the garden.

It’s not just we fortunate Lowcountry gardeners who leap to make such effort: the gardeners of the Mediterranean, whose climate and geographical diversity offer a huge variety of landscaping styles and native plant choices, have a truly remarkable resource in the Greek nurseryman, Liberto Dario—plant hunter, teacher, raconteur, gardener, and tour guide.

Having at hand the glory that is Greek native flora to choose from (Cyclamen; Crocus; Allium; Paeonia; Salvia; Iris; and countless others), Dario—as I write this—is leading a tour of Chile in the Atacama desert, accompanied by world-renowned photographers and plant enthusiasts. The adventurers are identifying, recording, and protecting Chilean native plants, hoping to assure their continued contribution to the diversity of the world’s flora and expand the knowledge about those plants and their conditions for survival. 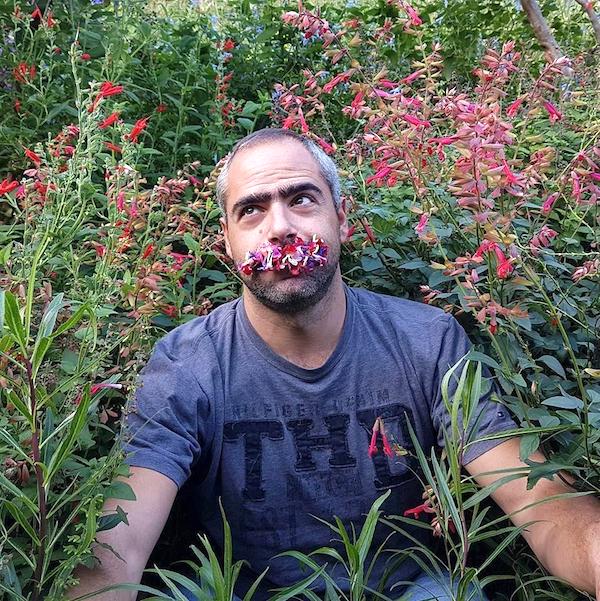 There are a number of native plants growing all around us here, closer to home, however; plants which can be fully as magnificent as garden plants as they are successful in the wild. In most cases, these natives choose particular sites and specific conditions in which to flourish; the wise gardener would do well to pay particularly close attention to the conditions such plants choose; success in using them in the garden may depend upon providing conditions somewhat similar to conditions favorable in the wild.

Such things to notice would certainly include water (Is it in a ditch filled with water? On a sandy ridge?), light (Does it get glaring sun all day? Morning sun? Is it in the shade?), soil (Is it in rich leaf-litter? Perhaps sprouting from a pile of old bricks and mortar? Sand?).

Bear in mind as well that the conditions to which wild plants are adapted are often not rich in nutrients. Putting those plants in a highly fertilized, frequently-watered garden could create a monster—or could kill the plant. Gardening with native plants may involve at least as many challenges as gardening with plants from Lowe’s. But the rewards just may outstrip the rewards from those big-box-store plants.

Among the most significant rewards to be gotten from native plants is that the “inputs”—fertilizer, water, etc.—may sometimes be reduced to almost nothing. And everyone already knows that wildlife—birds, butterflies, helpful insects such as bees—is adapted to the native flora for food, shelter, and reproduction. Sometimes, they have adapted exclusively to a particular plant. Planting native flora helps assure the survival of native fauna. This is important because, very often, imported plants, while beautiful, may provide no sustenance at all to the insects and animals of an area. If we plant only those imports, we reduce the availability of food and shelter sources for those creatures, contributing to their decline.

There are some wonderful native plants in the Lowcountry that I find so stunningly beautiful I think they deserve a place in the garden—assuming, of course, that the garden provides the right conditions for the plant. I’ve written before about one of the dozens of types of goldenrod that I’ve become completely smitten with, Solidago stricta, of which I have only recently found the correct name. The Wand Goldenrod sends up an absolutely straight stalk, the top third of which is covered in the typical golden flowers. It is an exclamation point in the landscape, a vertical line. A mass of them is spectacular.

One of the most impressively colored native plants has finished its bloom now; dramatic stands of its intense, brilliant dark purple flower heads atop 6- to 10-foot-tall plants have aligned with many roadside ditches. There are a number of species of Vernonia, or Ironweed, but this very tall variety is V. gigantea or perhaps V. altissima. Obviously, it would take a garden of a certain scale to handle such a large plant, and that can be the case with a number of the larger native plants. 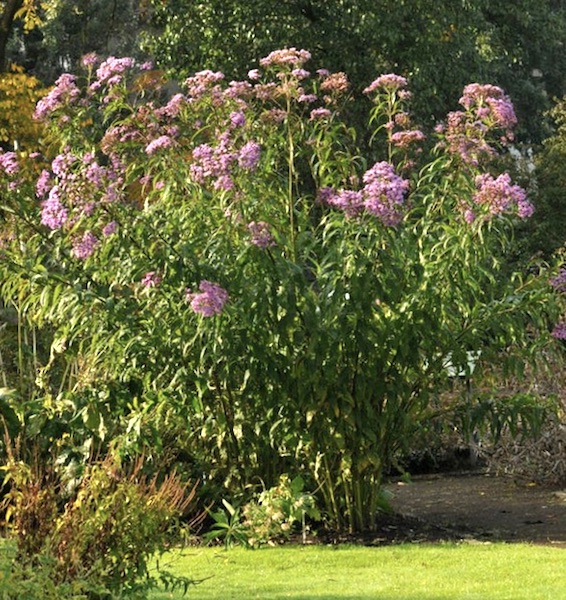 Ironweed in the garden.

There are other natives which aren’t quite as “spectacular”; rather, they are downright diminutive. The Grassleaf Roseling (Callisia graminea) is a tiny wonder, looking like a very small clump of grass most of the year, but blooming in early summer with exquisite tiny pink flowers and looking just like a miniature Spiderwort. It prefers the sandy hills of our Carolina midlands but ranges broader in suitable sites. In the right setting—perhaps a rock garden where such little jewels can be placed with precision, the visitor to the garden can get up close to appreciate such a small treasure, as the native Roseling.

Now, I must caution those dear readers who may be moved to go right outside and dig up a few wildflowers to put in the garden. It is ill-advised. In addition to the risk of trespassing and the irreparable damage to native habitat, the fact is that most wild-dug plants rarely survive transplanting.

Instead, locate a responsible nurseryman who specializes in native plants. In addition to getting healthy, ready-to-plant examples, you will have access to tremendously knowledgeable experts anxious to share the best information and advice. You will be advised on whether a particular plant will likely do well for you, or you may be pointed toward a more likely candidate for your garden.

Plus, you will get the enormous satisfaction of maintaining the discoveries of the great plant hunters, like Mark Catesby and the Bartrams.

Regarding Images Used: The image of Lilium superbum belongs to plantlady; it is used according to the Creative Commons Attribution-Share Alike 3.0 Unported License; the image of Liberto Dario is owned and published by the subject; thanks to the wildflower nursery, American Meadows, in Williston, VT, for the use of their image of Vernonia gigantea.