“I’m preaching to myself, he would say, as if the belief that the grace of a common bread was easier for us to comprehend than the oracle of his mouth; that his humanity be acceptable in our sight; that we forgive his inability to live out the words on our behalf. We believers in the arm’s length transaction, in dramatic acts of blood and fire, and in the sacrifices of someone else.”—Tom Sturch 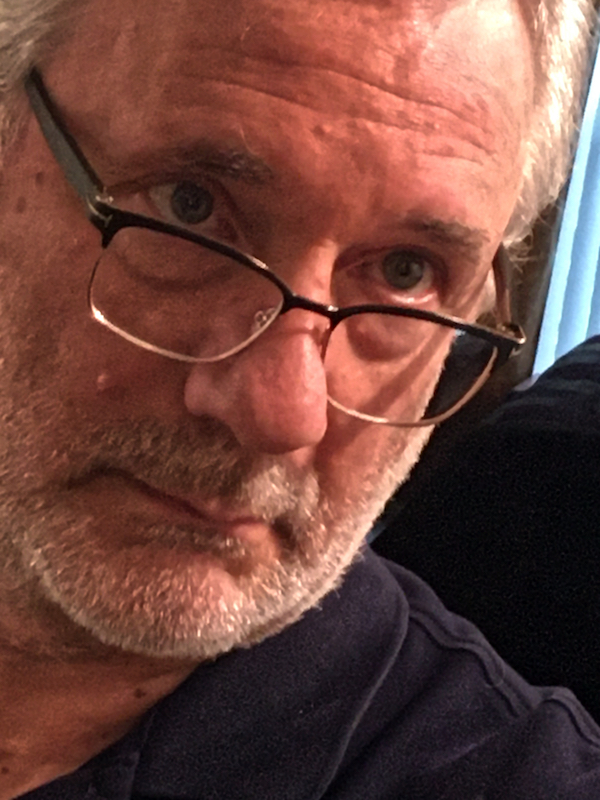 GREENVILLE South Carolina—(Weekly Hubris)—1 June 2020—Tom Sturch, husband to his favorite reader and father to adult sons, lives in Tampa, Florida and keeps a small landscape architecture practice. He discovered poetry about eight years ago as another way to enjoy place-making and way-finding. The inhabitants of his messy garden and trips to the beach source his works, which can be found published in St. Katherine Review, Gargoyle, Relief Journal, and Jesus the Imagination.

By three the sky is already nostalgic,
receding like the Maine summer is off the clock.
September now, the sun drifting fast toward Florida
as the planet’s two hemispheres pivot in its orbit.

The big-hipped women at Trevett’s finish another lunch crowd.
The lobster rolls they whip out keep customers satisfied
long past the tourists. Light mayo. All seven years
of the crustacean on a fresh, split-top bun.

From the dock we watch a welder weld new metal onto the old
swinging bridge. Each spat of the torch flares electric blue.
They say Terry Freese will still spin the leaf but not like she used to.
It’s a small, twenty-ton span. And since 1931 the center drive shaft

of the pony truss bridge has been propelled by a person.
Should have seen her, they say. Shoulders, flanks, flexed
against the world like the big idea of Archimedes’
in a pirouette of leveraged power. Winding the capstan,

engaging the pinion until momentum alone completes the rotation
to align with the river. And after a boat eddied by she reversed the wheel
to put it back again, opened the gates for folks on the road to the island,
or inland, and returned to her watch for the next.

But the state is making it stronger now, for bigger trucks and loads.
An electronic motor, too. Big whoop, the ladies say. No big deal
about a button manned from a booth, after watching Terry reel
about the center of the earth.

All Clear at Fort Sam Houston

I would not presume
upon the wind

or suppose to give it permission,
or project any sort of

sentience upon it
before today, when

during your military honors—
in the pall of rifles, bugle and flag—

and billowed
in an instant thin as light.

How exact upon
the scope of my perceptions.

How keen its subversive thrill
embodied,

not in the past, but prospect,
employed

with fullness upon my
fast resistance

to sadness or admiration
or ceremonial tears.

It didn’t ask me
to change my heading,

didn’t upset my craft,
moreover, free of the narrows

and tacking, gifted me lift
and speed.

And approaching the pinnacle of his discourse
his eye would shy to the podium, to the written page,
and a union of the voices of memory and presence

would repeat the words he’d bled in study.
Then, as his tenor and pitch rose to the crux of his point
he’d raise a lightly closed circle of his left thumb

and slightly curved fingers, and pause it,
just between his jaw and cleft chin, like suspending
the plumb bob of heaven and hell on a very thin thread—

and a second later he’d gesture out at the top, let words drop
like a wafer, the pith of it settling, then dissolving
like a fog on the waters of washing and deliverance,

illumining the state of one’s conscience.
I’m preaching to myself, he would say,
as if the belief that the grace of a common bread

was easier for us to comprehend than the oracle of his mouth;
that his humanity be acceptable in our sight; that we
forgive his inability to live out the words

on our behalf. We believers in the arm’s length transaction,
in dramatic acts of blood and fire, and in the sacrifices
of someone else.

By the time today arrived tomorrow
was underway in the Pacific

twenty-four hours from here. Zones
of time in slices like an orange.

ponder the pith at its center, put a
thumb in, the zest of its skin,

cheek the tang of its juice, tongue
a smooth seed. Sleep without alarm.

pried the tire away from the rim, pumped a pump
with one arm until the inner tube was fat

felt for the cool shot of air, stopped on the spot,
pumped, spit again and spread it on the tube until

bubbles sizzled. It was a magic founded in know-how.
A practiced skill. Now I ply it repeatedly for sons

in search of spells the muse would cast to fill and
empty them – breath to hand, spit to wheel.

to the cutthoat seep; palmetto blades
knifing through the morning mist

that lingers, not like sleep, but a slow wake
as ghosted longleaf snags and slash pine

float in a shifting bank of knee-high fog.
Decipher the cinnamon and royal fern

for dry feet on the hunt for snags felled
by gravity, entropy and time –

broken, spawling, not by impact alone
but the ubiquitous hunger of endemic foragers.

You follow the pieces to the rootstock,
to the heart hard with sap –

the red fatwood striped beneath the punk
that the pilated woodpecker,

arboreal ant and beetle etch over.
Hatchet a splint or two and volatiles

that dissolves yet keeps
the primal night for hours.