The Poetry of Jim Peterson

“You stoop to lay your/hand on exposed roots of the cherry tree you planted/ten years ago.  I feel your touch on some part of me/called nothing in this particular moment, called/emptiness by some teachers in their books, though it is/something in me that aches and sends me to a chair./I remove my glasses so I can see both the fuzziness/and the clarity as they come to me in a sentence/without words, the syntax of gain and loss with all/its modifiers coiling and uncoiling in the fresh spring air.”—By Jim Peterson 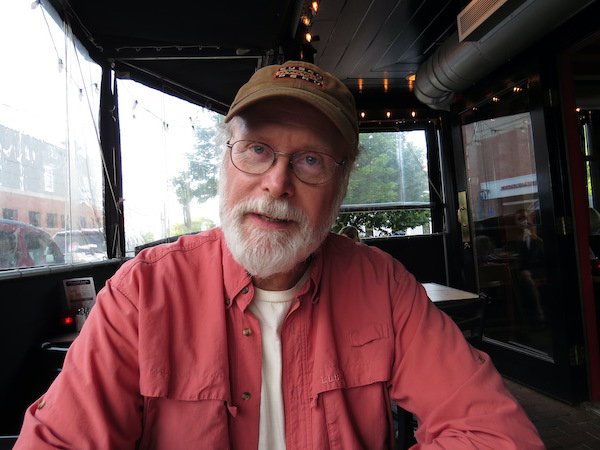 GREENVILLE South Carolina—(Weekly Hubris)—1 December 2021—Jim Peterson has published a novel—Paper Crown, Red Hen Press, 2005—and seven full-length poetry collections, most recently The Horse Who Bears Me Away from Red Hen Press in 2020 and Speech Minus Applause from Press 53 in 2019. His collection of short stories, The Sadness of Whirlwinds, was published by Red Hen in November 2021. He has won The Benjamin Saltman Award for poetry from Red Hen Press, a poetry fellowship from the Virginia Arts Commission, and an Academy of American Poets award. His plays have been produced in regional and college theaters. He retired as Coordinator of Creative Writing at Randolph College in 2013 and remains on the faculty of the University of Nebraska-Omaha Low-Residency MFA Program in Creative Writing. He lives with his charismatic, three-legged Corgi, Mama Kilya, in Lynchburg, Virginia.

This morning you walk beneath the undecided trees
in your flowered nightdress.  The limbs darken
with russet buds stymied by a final wave of winter.
Your hands, I know, grow numb with reaching high
in the cold air.  I make my strong coffee and peel
my boiled egg.  I caught a rumor in the store that you
are more than ordinary woman, but I could have told
them that.  I shuffle in my slippers from window
to window to watch your progress from tree to bush
to barely risen bulbs.  The seamless gray sky contrasts
the hard-earned tan of your face.  You stoop to lay your
hand on exposed roots of the cherry tree you planted
ten years ago.  I feel your touch on some part of me
called nothing in this particular moment, called
emptiness by some teachers in their books, though it is
something in me that aches and sends me to a chair.
I remove my glasses so I can see both the fuzziness
and the clarity as they come to me in a sentence
without words, the syntax of gain and loss with all
its modifiers coiling and uncoiling in the fresh spring air.

Originally published in “I-70 Review.”

This is almost too simple for words.
She had
a few days left to live.  In our living room
she lay
on the hospital bed, TV on, but the sound
was off,
an ancient, rowdy episode of Mash—
helicopters landing,
the wounded carried on stretchers
to the OR,
Hawkeye and BJ up to no good, ogling
Hot Lips,
Tormenting Frank and Colonel Potter,
enlisting
Radar in yet another doomed scheme.
But she wasn’t
watching TV anymore.  Her eyes were
mostly closed
and when they opened they didn’t look
at me,
or anyone, just stared.  This was before
the night
of death rattles.  This was before
the nurse
told me to stop trying to feed her, to give her
water.
I was sitting in a chair beside her bed,
facing her,
right hand on top of her right hand.
I asked her
if she could look at me just one more time.
She turned
her head (at what cost!) slightly toward me,
opened
her eyes, searched for mine, found them,
held the gaze
for a moment.  There you are, I said.
Slight nod.
We need ole Hawkeye to help us with a scheme,
I said.
The tiny wren of a smile perched for a moment
on her lips
before flitting away.  She loved that big-hearted
rascal.
He’d kept her laughing, kept her company,
on many
of those long, horizontal days.  She reached
the limit
of her strength, closed her eyes, let her head roll
against the pillow.
I moved closer to her face.  “I love you,” I said.
She summoned
her strength and whispered “I love you,”
the last words
she ever spoke to anyone, like the sound
of a fine-point pen
flying on paper, a burning scar on my heart—
the last,
best, craziest scheme we ever hatched
together.

You know the horse you ride
the way a painter intuits hues
of merging colors,
the way a sculptor feels in her curled hand
the sinew of wood or stone,
the way a writer invites unforeseen words
to perch on a branch in her brain.

You ride deep in the saddle, balanced,
hands on the reins in ready contact
through the slippery, steel bit
with his sensitive mouth, allowing
his head and neck to reach out,
relaxed, muscles flowing, ears alert
and forward, your legs bowed seamlessly

to the ribbed flanks,
eyes focused ahead on the grassy path
or the rocky, switchbacking trail,
or the open field seeking an obstacle—
a wall, a fence, a gully—to fly across,
hooves churning beneath you
like cogs in the wheel of earth,

your eyes turning also inward, drawing
some essence of yourself down
into the core of that giant, and dwelling there,

a place devoid of time or space, bereft
of thoughts and words, barren and crowded
all at once, full of thundering muscle and bone,
the fire of burning breath, the hiss
of ripped air, the fusion of two into one.

No wonder you don’t want to come down
from there, riding all day and all night,
sun transforming into moon, clouds
into black sky and stars.

No wonder you want never
to come back.

The more gone she is,
the more she is gone.
I live alone.  I hear

the clock ticking,
the compressor pushing air,
the sound of my own air

passing through nostrils,
the repertoire of the catbird
outside my windows,

my dog adjusting her position
on the hard wood floor.
My six senses, including thought,

percolate, but nothing
is old and nothing is new.
I can barely imagine sex,

barely imagine love as I
knew it.  Looking inward
I can see the nothing that is there,

nothing like a pearl in the palm
of my hand, a presence that both is
and isn’t me.  I pay the bills,

I cook some meals, I hang out
with my friends.  I seek the center
of my being that both is and isn’t me.

I don’t mean to speak in riddles
but in simple truth.  In her
absence, I pursue God who is

and into which it all disappears.
As if such a God could ever
be pursued and found,

could ever be demanded of
or convinced.  Her ashes
are scattered on the ground

of places she loved, are blended
into the clay pottery of her friend,
are in an urn encircled with birds

in the room that once was hers.
Some life still burns in me, but
what it means and where it leads me,

as always, I do not know.