The Poetry of Roy Bentley

“It’s a warm December in Washington,/a few days before Christmas, the slaughterhouse/of men quiet, those around the lieutenant general/eager to repeat news of victory they know comes/at a price, even if the war is just and Honest Abe/a liberator. A woman asks, Are you him, really?”—Roy Bentley 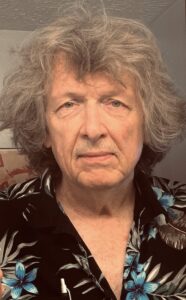 GREENVILLE South Carolina—(Weekly Hubris)—1 September 2020—Roy Bentley, a finalist for the Miller Williams prize for Walking with Eve in the Loved City, has published eight books; including American Loneliness from Lost Horse Press, which is bringing out a “new & selected.” He is the recipient of a Creative Writing Fellowship from the National Endowment for the Arts and from the Florida Division of Cultural Affairs and Ohio Arts Council. His poems have appeared in New Ohio Review, Rattle, The Southern Review, Crazyhorse, and Shenandoah, among others. Hillbilly Guilt, his latest, won the Hidden River Arts/Willow Run Poetry Book Award and awaits publication.

On the Diamond behind Garfield Elementary, Melvin White Proves There Is but One Boog Powell

When Dave Wheeler fielded the hard one-hopper
to short, he fired the ball to Melvin White,
forgetting the huge first baseman
moved like molasses.
Melvin caught it on his sternum.
You could hear the breath escaping
all the way to center field.

Falling in love is like that,
begging air as the infield laughs hysterically.
You could be dying, blue and big as Melvin White.
It could be spring and the woman married.
She could be dark
and fine as air the hour after rain.
Still, they would double over laughing,
the pain getting worse.

And after she had gone,
you would catch her scent, imagine
strong small hands halving apricots
as you fall face first, runner advancing
Of course, eventually the pain would ease.
You would stand.
It would be important that the game go on.
You would recall a score,
how far behind you were when it hit,
only this bright burning in the lungs.

(From Boy in a Boat (University of Alabama 1986); first appeared in The Ohio Review.)

Pre-dawn, late February. Lines of uniforms and
the voices of boots, base streets a second flesh
of ice. There’s little to do this early
but half-step and pray. He’s short, Butch,
in the rear of the column, says later that he

sees me falling to earth, disappearing abruptly
up ahead in the blue dark. This night
is ice for miles running, and it’s forcing
big men and small to call Christ Jesus
and reach for whomever’s at hand. Or nothing.

I can see the glare as off of a lake
whose still surface receives the weight of men.
It’s like a movie, guys in snaking lines
making a hole for the fallen. Say you’ve
fallen, sit amazed, and no one will stop. No one.

Suddenly, the dark behind those on the road
opens to extend a merciful hand and Wham—
you both go down. Say you’re both laughing now,
or else you’re about to, and this hand’s
still holding on. You want it to release

but you need it. The thing is you can’t, finally,
go on without help. Something else: you fall,
rise, fall, and keep giving orders to God
or Heaven concerning the disposition
of all this ice, the indifferent season,

a shiny-with-starlight state of Texas
that has turned a kind of silver underfoot.
In that moment the air itself parts, yields.
It knows about keeping its balance, about
distances traveled in a whole other country.

(From The Trouble with a Short Horse in Montana (White Pine Press 2006); first appeared in The Southern Review.)

The Politics of Spit

Without our uniforms, the haircuts
betray everything: we’re servicemen
and enlistees since no one gets drafted
into the Air Force, which makes us doubly
hated in Champaign, Illinois in 1973.
It’s the Ray-Bans and white-sidewall, trimmed-
around the ears hairlength in the Age
of Aquarius. Still, I’m stunned when someone
lets go a huge you-know that lands at our
feet then a smaller one that hits me
like the realization America isn’t one country.
We’re just standing there, stupefied, checking
ourselves like the ones in the Real War
must have had to after a fire fight. A command
to oneself not to fold, not here, little coins
of cruelty abloom on this broadcloth shirt.
It is when I stand like this—
shamed, changed forever, past the splatter,
that I feel what it is to be taken in
by an idea of one’s own worthiness,
to die to that and learn about the nature
of Power and its companion Humiliation.
I think this stuff soaks in, and it does.
Marked this way, I can begin.

(From The Trouble with a Short Horse in Montana (White Pine Press 2006); first appeared in The Southern Review.)

First, Larry King mistakenly calls Ringo
George then asks him whether his passing,
George’s, was expected. He answers that it was.
Says they knew he was sick. Had lung cancer.
I’m watching, though it’s none of my business
how grief-stricken Ringo Starr was and likely
still is or whether he was there, at the bedside,
at the moment George left his life for some other,
if you can believe what George believed, which
was that we keep coming back till we get it right.
And when Ringo is about to let down his guard
and be a bit more self-disclosing, even honest,
Larry interrupts, asking, Do you ever want to
pinch yourself? And Ringo Starr says, Sure.
In 1988, years before, in another interview,
with George, this years after Lennon’s death,
Ringo confessed that he was the poorest Beatle
then laughed and blew cigarette smoke upward.
Which must’ve seemed terribly funny to George,
an inside joke, because he said Hello, John to
the smoke like it was Lennon (by virtue of his
acknowledged wealth) or some spirit he used to
conquer worlds with. Ringo says he was shocked
upon hearing the news of the death of John Lennon,
but that George’s death was another thing entirely.
He doesn’t quote from the Bhagavad Gita, but it’s
as if he wants to say we continue on, are these spirits,
a sort of outrageous bliss even to think it, dumb luck
on the order of being hired as the Beatles’ drummer.
Maybe he would have said it, with respect to George
or ventured his own beliefs, if Larry hadn’t butted in
to ask him which of the Beatles was the best musician.
You mean, now? And I want to laugh now because
maybe Ringo’s imagining how hard it is to move
your hands after you’re dead, or to move at all,
and how impossible it must be to keep time
and tempo in all that anonymous blankness,
the dark become your most imploring fan.

(From Walking with Eve in the Loved City (University of Arkansas 2018), first appeared in Rattle.)

Grant on a Streetcar near the End of the War

It had been written that Grant wore the morning
like a uniform, but, as he seldom changed clothes,
his fellow riders may have needed to turn away;
as at a funeral where we leave at the lowering,
though we’ve loved this one with every breath.
Of course they were right. He was anonymous.
One of us. Failed till it was his job to sacrifice

others. One hand on the strap, eyes staring,
wide-smiling because no one on the crowded
streetcar believes he is who he is. Not a smart
bunch of Northerners, these on this conveyance
on its way to the Willard Hotel and an audience
with Lincoln. It isn’t overly modest to say, I am
and ask that it be enough, though it got Christ

crucified. It’s a warm December in Washington,
a few days before Christmas, the slaughterhouse
of men quiet, those around the lieutenant general
eager to repeat news of victory they know comes
at a price, even if the war is just and Honest Abe
a liberator. A woman asks, Are you him, really?
It’s the telegraphy of the way he’s dressed—

an unsigned greatcoat announcing Soldier
minus the rank: the three-day beard-stubble
and the Mathew Brady daguerreotype after
appalling carnage at Cold Harbor not enough—
Presence puts the lie to Eminence, the Butcher
of Battlefields (again) uncredited with being
himself among wheel sounds and laughter.

Claire Bateman’s books include Scape (New Issues Poetry & Prose); Locals (Serving House Books), The Bicycle Slow Race (Wesleyan University Press), Friction (Eighth Mountain Poetry Prize), At The Funeral Of The Ether (Ninety-Six Press, Furman University), Clumsy (New Issues Poetry & Prose), Leap (New Issues), and Coronolgy (Etruscan Press). She has been awarded Individual Artist Fellowships from the National Endowment for the Arts, the Tennessee Arts Commission, and the Surdna Foundation, as well as two Pushcart Prizes and the New Millennium Writings 40th Anniversary Poetry Prize. She has taught at Clemson University, the Greenville Fine Arts Center, and various workshops and conferences such as Bread Loaf and Mount Holyoke. She lives in Greenville, South Carolina. (Please see Bateman's amazon.com Author's Page for links to all her publications.)
View all posts by Claire Bateman →
This entry was posted in Uncategorized. Bookmark the permalink. Follow any comments here with the RSS feed for this post. Post a comment or leave a trackback: Trackback URL.

2 Responses to The Poetry of Roy Bentley