“The thing is, we know nothing about death/Except what it is not. It is not pain,/Nor struggle. Stripped of need even for breath/Our bodies settle. Minerals do not strain;/Achievement and failure do not call to chalk./As we lose the sometime burden of our flesh/Our obligations melt. Was blood the caulk/That sealed our souls to bone? A living mesh”— Jean Carroll Nolan 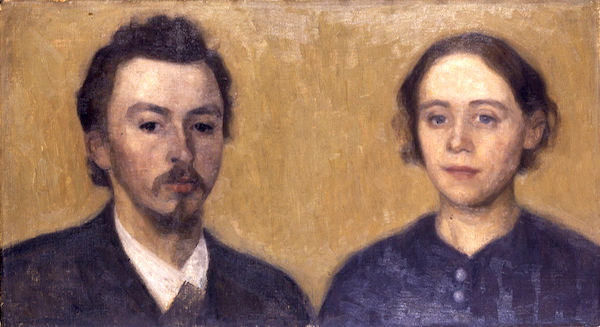 “Double Portrait of the Artist and his Wife,” by Vilhelm Hammershøi.

SEASIDE California—(Weekly Hubris)—February 2021—Since we last heard from Jean in January, 2020, she has been, like most of us, learning about isolation. At 70, with multiple exciting underlying conditions, she views trips to the pharmacy and the grocery store as incidents justifying hazardous duty pay. She agonizes over what she considers attendance at the deathbed of the Republic, and is, at various times, puzzled, amused, and furious at the fact that facts no longer matter to a vast percentage of our population. It must be added that isolation took on new meaning for her on 29 May 2020, when her husband of 52 years, and companion of 54, John Nolan, died of multiple myeloma, probably a result of exposure to Agent Orange 1969-1970. Her business, since that event, has been an exploration of distraction, reflection, and reconciliation, and, her dogs, who crack her up, daily, subsuming their own grief to ameliorate hers. She still considers herself extraordinarily fortunate. 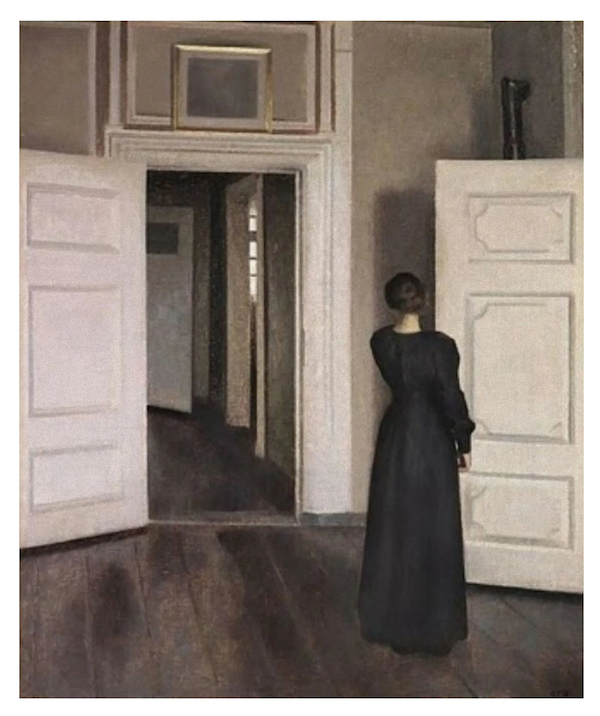 Jean Carroll Nolan: My husband, my best friend, my lover, my partner in crime, died and walked into the sun, at 11:28 in the morning, on May 29, 2020. Were he here, he would be royally pissed off. John was a man who practically fetishized time. His first big purchase as an adult was an Accutron watch, and he died, nearly blind from macular degeneration, leaving four watches, none of which he could see and one of which was brand new, and six clocks. It must, therefore, annoy the bejasus out of him that his death certificate, filled out by a VNA nurse, as is common in hospice cases, reads 12:10, the hour at which she certified him deceased, not the moment he moved along.

I laugh about this. In a Regency novel called Venetia, Georgette Heyer wrote a conversation between protagonist and heroine on the ultimate glue of successful relationships. In the course of their discussion, the two end up noting that you can find sympathy in affliction anywhere, but a shared sense of the ridiculous is diamond rare, and infinitely precious. My love and I wholeheartedly agreed. We cracked up at funerals, at the wrong times in movies— (“As Good As It Gets” was a real revelation, believe me) —at ballets, at all manner of Serious Public Events which, as grown-ups, we should have taken, well, seriously.

Assuming, of course, that we were grown-ups.

So, knowing that he would—eventually—revel in the irony, I do so shamelessly.

I will bore you, and everyone else I know, over the next months and years, talking about John. He fascinated me, a 70-something former Marine, a medal-laden, certified badass, certified nutcase, who did not own a gun, who was the least homophobic human being I have ever known, who, despite a classic White male 50s upbringing, soaked in privilege, embraced diversity, embraced The Other, sought constantly to explore, not shut out, the different and novel.

I loved him, as I said too often, because we could make each other laugh, anywhere and anytime, and because his kisses, for 54 years, made me weak in the knees.

I loved him because, at Circle Campus, in Chicago, 24 years old, dyslexic as hell, no real academic training, he completed, freaking brilliantly, an assignment to choose four of Luther’s 95 theses, and use them to create a précis of the ideas that drove the Reformation.

I loved him because, several years ago, I brushed off a compliment, muttering darkly about lines and wrinkles and sagging breasts, and he grabbed my shoulders, looked me square in the eye, and said, “I didn’t say you look like you did in 1966, or in 1980, or in 2000. Of course, you look different. I said, you’re beautiful. Today.” OK, then.

I loved him because years ago, in an ice storm, he pulled over at a street crossing, and attempted to resuscitate an old drunk, lying in the snow, in a pool of his own vomit.

I loved him because once, driving, when we passed a bird standing over another, the latter dead, the former clearly mourning, he glanced at me, grabbed my hand, and cried with me.

He was grievously flawed, painfully damaged, enormously brave, admirably tenacious. He was narcissistic and generous, suicidal and triumphant, heartbroken and hilarious, philosophical and visceral.

I was 15 when we met; he, 19. When he was introduced, I did not “meet” him, I recognized him. Felt a literal clang in my chest, like a gong. He said he knew immediately, but, having been brought up in the 50s “good girl” ethos, I was coy.

But, from that day on, through giggles and desolation, through joy and devastation, through madness and walks and Fourths of July at the beach, I have known, every day, that I was cherished. And cherished because of who and what I am, not despite it. I have been incredibly happy and refuse not to be simply because he no longer feeds my senses. He may not be here, but my love remains. Our love.

So, acushla, my darling, these are for you.

‘Cause, you know, forever really is forever. Keep an eye out for me. 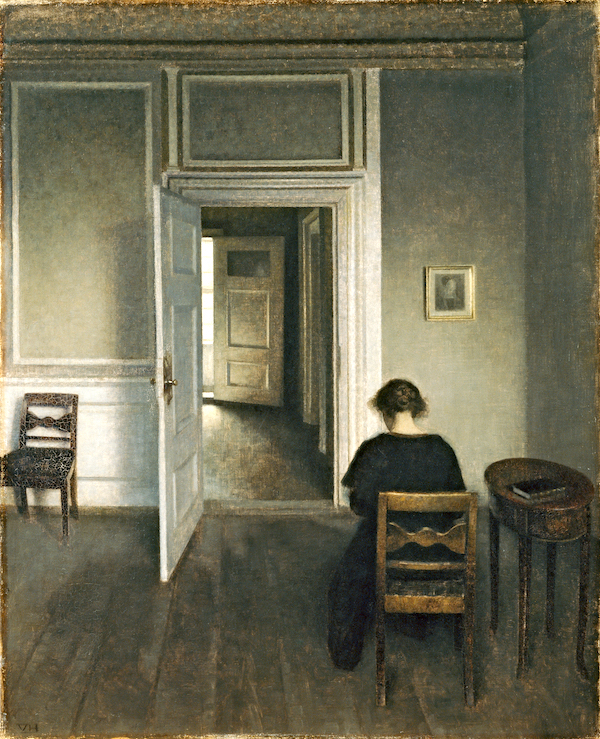 That we are by nature souls, presences, spirits, collections of electrical impulses, and thus it is our physical phase that is an aberration, not death.

The thing is, we know nothing about death
Except what it is not. It is not pain,
Nor struggle. Stripped of need even for breath
Our bodies settle. Minerals do not strain;

Achievement and failure do not call to chalk.
As we lose the sometime burden of our flesh
Our obligations melt. Was blood the caulk
That sealed our souls to bone? A living mesh

Enclosing spirit that wants to go home,
Ether returning to ether, seeking the song
From which it’s born? Dust to dust, loam to loam.
Perhaps, you know, we simply have it wrong.

This fear we have of stillness, fear to cease
Our battles may just be a fear of peace. 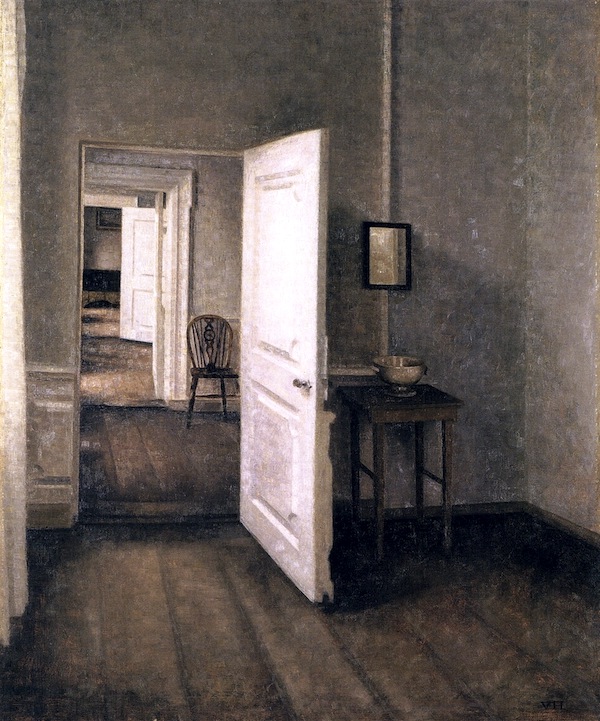 “Four Rooms Interior from The Artist’s Home,” by Vilhelm Hammershøi.

In the other room
By Jean Nolan

It’s not Victorian, not black and garish
Grief. It’s just the simple recognition
That memory is what I have to cherish.

I do not feel you, like an apparition.
No ghostly kisses, no hand cupping my cheek.
But half a century’s bone deep intuition

Doesn’t abate on command. Mind pictures speak
Almost as loud as reality, it seems.
So, as I wake from sleep, slow, childlike, sleek,

I feel as if you just had left the room, streams
Of pheromones, of person, and of scent
Trailing behind you. These are not like dreams.

No. These are the reservoirs of love unspent,
Still overflowing. To me, you are here,
The circuit closed, within me. Live, intent,
A frozen hummingbird, you hover. Near. 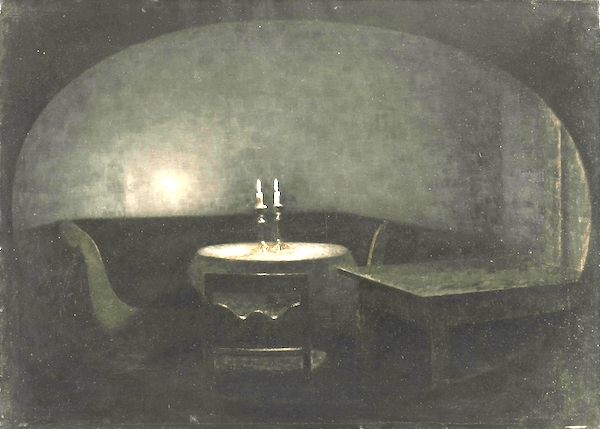 What I remember
By Jean Nolan

I remember waking up, in the dark,
in the loft, confused because the ceiling
boards were running the wrong way, then smiling,
oriented, my head resting on your thigh,
your open hand tangled in my hair, as we
had been when sleep swallowed us. I recall.
the luxury of finding my fat pillow,
and sinking, warm and happy, into sleep,
your breath a lullaby.

Jean Carroll Nolan lives in Seaside, California (just north of Monterey), in a perpetually disorderly house, with too many books for the bookcases and a housemate whom she has known since 1985, when they met on their daughters’ first day of kindergarten. She enjoys music, reading, writing poetry, talking with friends, and watching old films. She is cared for by two dogs: Sonny, a 90-pound bully dog; and Mojo, a 14-pound chihuahua mix. (The chihuahua, of course, believes himself to be larger than his enormous younger brother.) Nolan’s reading tastes are eclectic, ranging from sociology to murder mysteries, royal biographies, and military history. She considers herself a liberal and a patriot, and sees no dichotomy there. She supports animal rescue projects and facilities (race horses and pit bulls, in particular), and is trying to preserve a diminishing belief that courtesy and kindness have power to reshape the world. She adores her two adult children and her daughter- and son-in-law, who are as good as it gets. She is desperately in love with her grandchildren, Brody and Sarah, her grand dogs, Wayne and and Chance and Suzy Snowflake and Valentino, and her grand cats, Oliver and Greta. She enjoys finding and enjoying the miraculous in everyday life, a trait she first discovered in the subway stations of Chicago, observing former field mice who, amazingly, not only survived but thrived on the track bed below the trains. (Author Photos: John Nolan.)
View all posts by Jean Carroll Nolan →
This entry was posted in Uncategorized. Bookmark the permalink. Follow any comments here with the RSS feed for this post. Post a comment or leave a trackback: Trackback URL.

11 Responses to The Premise