The Squirrel Amongst the Razors In Occam’s Butter Churn

Posted by Elizabeth Boleman-Herring on February 6, 2012 |

TEANECK New Jersey—(Weekly Hubris)—2/6/12—There are many on FaceBook who already question my sanity. Heaven knows, I myself question it much of the time. Usually, however, it doesn’t answer me back in squeaks . . . or leave droppings behind the piano (and everywhere else in the living room).

You already know where this is going, and how it will end, which is more knowledge than I possessed about three hours ago.

For about a week now (a long time to remain this delusional, I admit), I have believed, firmly, that: 1) my husband was going round the bend; or losing his vision and sense of proprioception entirely; 2) we had inherited a determined and wily downstairs poltergeist; or 3) I, losing my mind, was sleep-walking and, in the process, sweeping frames from atop the piano, pillows from off the sofa, and chotchkes from the chifferobe. I would come downstairs at intervals during the day to find the living room a veritable shambles.

Didn’t notice the droppings—rodent; large—until a few days into this visitation, by which time my mind had ranged over the above three possibilities, leaving out the obvious, logical, boring, Occam-esque one: a squirrel had come down the chimney flue (and come and gone and come again), to wreak domestic havoc in our Teaneck digs.

Such a dull reality compared to a barmy spouse, a peevish ghost or a clumsy somnambulist.

Today, however, when I noticed all the fat, black excreta hither and yon upon our hardwood floors, I came to my senses . . . at just about the same moment that the squirrel twigged to my presence and began to go all St. Vitus on our collectibles. 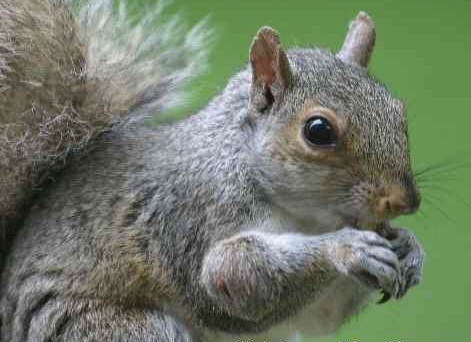 NOT my idea of a houseguest.

There was, of course, a fire lit in the fireplace, blocking the rodent from her or his usual exit.

And there are lots of doors off our living room; lots of breakables therein; and no safe place for me, plus a squirrel.

Or two squirrels, I immediately thought. Or two!

“Madam, yours is NOT an emergency. Let me call you right back, though.”

Not an EMERGENCY, I thought. What IS an emergency?!

I was by this point, backed up against the closed double-doors to our dining room, a cell phone in one hand, the portable phone in the other, dialing madly—without my reading glasses.

“OK. What would you call this, then?” I asked, as levelly as I could.

“Something for Animal Control,” said the Dispatcher, patching me through to a very calm woman in, apparently, the business of dealing with everything in the realm of fauna except housebound squirrels.

By this time, using my own noggin, I had found some footwear not stashed between the squirrel and our front door, gone out the back door (calmly asking Animal Control for referrals), and rounded the house to prop open the front door.

Then, racing back around the house in my PJs and my husband’s Size-12 bedroom slippers, I rifled through our ancient Rolodex looking for John or Kurt’s number: Kurt had relieved us of a groundhog, several years back. Simultaneously, I located my husband (at IKEA, helping a friend—not too far away from Chez Rodent(s), thank God) and explained, gently, that he needed to get the f^%$ home. Now. Yesterday.

I envisioned a non-Occam-like rabid tree-climber attached to my leg, a horrid trip to the ER for that series of rabies shots made directly into one’s stomach, etc., etc., etc. Spiders, I can handle. Shield bugs, I can handle. Anything that bounces off the ceiling emitting hard black pellets in mid-air, I cannot handle.

“Kurt’s no longer among us,” said John, “and I don’t do animals, but I’ll talk you through this.”

“You’ll talk me through what?” I queried.

“Well, getting the varmint to go out the front door, of course.”

“And how do you see that happening?” I asked, as I advanced upon the squirrel with a broom and pillow.

“ . . . well, John,” said I, “you know what he’s done, instead? He’s just gone into a precious-to-me, antique butter churn not two feet from the front door, and it’s a costly, rare butter churn full of umbrellas: I can’t ‘cap’ it.”

At this point, with John “talking me through it,” my husband and our friend, Roberta, appeared, Stage Left.

“Roberta, stand back,” I said. “This animal could be rabid.”

“I know,” said Roberta, who proceeded to relate the tale of a rabid raccoon on Ocean Drive in Carmel-by-the-Sea going after a Yorkie-aloft-holding matron fore and aft.

“Left bite marks right up one side and down the other,” said Roberta.

Dean, meanwhile, was searching for something with which to block off the foyer—he found a huge door in the garage, and he and Roberta toted it in and hoisted it into place.

“You should be videoing this for YouTube,” said John, helpfully. “Thing’ud go viral.”

“Not going to happen, John,” I said through clinched teeth, as Roberta and I sealed the chinks between the door and the foyer door-frame with newspapers.

Through a small hole, I could see the squirrel’s quivering tail sticking up out of my grandmother’s churn . . . and, through the window, my husband approaching with a half-sheet of plywood in one hand and a rake in the other: Russell Crowe, Gladiator II: The Rodent Version.

Gingerly, the jazz musician approached the churn; in a twinkling, turning it over with the rake and, matador-like, now, half-turning, deftly, as the squirrel shot past him into the boxwoods. The boxwoods outside the house.

“I cannot tell you how exciting this has been,” said John. “Now, you really need me to come over there and cap that fireplace for you.”

I do still think our house is haunted: but, by the ghost of JamesThurber; not poltergeists.

Note: For more on Occam’s Razor, go to http://en.wikipedia.org/wiki/Occam%27s_razor

Also, squirrel antics aficionados will want to see our Webmaster, Tim Bayer, do mortal combat with one of these wily antagonists at http://demogrid.com/squirrelbattle/index.html