The Stamp(s) of History

“In the chaotic aftermath of my father’s death from Alzheimer’s, many family heirlooms were lost to my eldest sister and me. Among the items my father intended for me included several folders and binders of stamps, collected both as a side hobby and as a result of his extensive correspondence to Greece and Cyprus. As I opened the box, several booklets and packages of Greek stamps painstakingly compiled over four decades fell into my lap.”—Alexander Billinis 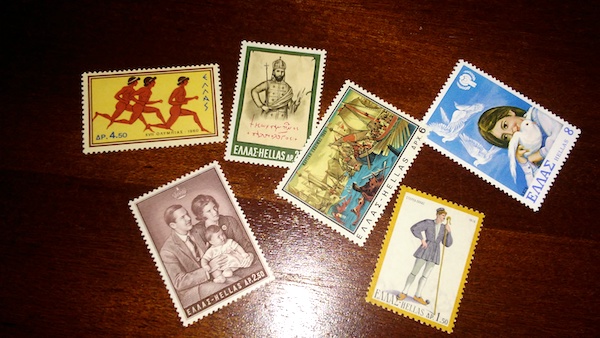 A selection of stamps from my late father’s collection.

CLEMSON South Carolina—(Weekly Hubris)—November 2017—Moving is never easy. It involves a fraying of nerves and, in my case, analog pounds from work and stress; it always costs more than you anticipate. Things get lost, and broken.

Sometimes, however, things are also found. During the chaos of my family’s recent move, items lost or forgotten (particularly when, as in our case, we have moved some ten times over the 14 years of our marriage) suddenly (re)-emerged. Not for nothing do I refer to myself as the “Roaming East Roman.”

As I returned from our new South Carolinian home to finish off the move from our former Chicago home, I wearily opened yet another box, one long sealed, likely from before our eight years in Europe. Unlike Pandora’s box, this one was full of good things.

In the chaotic aftermath of my father’s death from Alzheimer’s, many family heirlooms were lost to my eldest sister and me. Among the items my father intended for me included several folders and binders of stamps, collected both as a side hobby and as a result of his extensive correspondence to Greece and Cyprus. As I opened the box, several booklets and packages of Greek stamps painstakingly compiled over four decades fell into my lap. 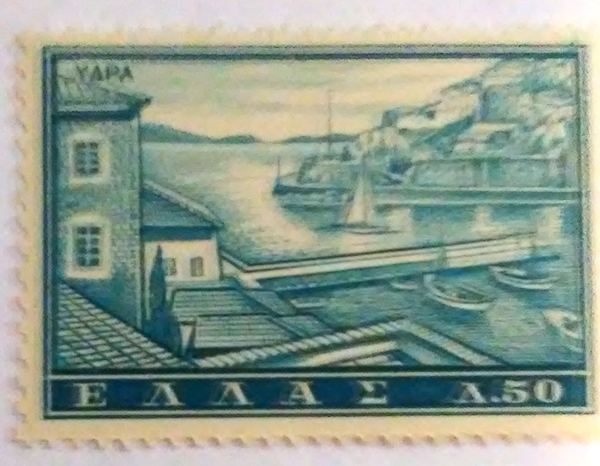 This one my father kept separate: it’s Hydra, our family Island.

I turned the pages reverently, as beautiful, brightly colored stamps depicting images from Greece’s four millennia of history, national costumes, (ex-)Kings and -Queens, and Junta Phoenixes shone behind protective covers, compiled by a man who loved Greece with visceral intensity. Whether from the exhaustion of too much cardboard and carrying, or the memory of his gentle heart, I cried.

As moving—and valuable—as this compilation was, together with a beautifully bound edition of the 1980 Moscow Olympics, with stamps from a country that no longer exists; it was, rather, a haphazard manila envelope that touched me the most. Stuffed with well over a hundred envelopes from Greece and Cyprus, most of them emptied of their letters, it was the return addresses, dates, and once again, the stamps that carried stories personal and cultural. I found it possible, using the date, the sender, and the stamp’s era and subject to surmise something of the context and contents of the contents. In some cases, though, the letters, too, were extant.

For as long as I can remember, my father had a subscription at the Eleutheroudakis Book Store in Athens, a virtual shrine to us every time we were in Greece. (The chain is now sadly defunct, but it was there when I last lived in Greece, and a source of solace from the “Greek Reality.”) Over the course of ten years, from the mid-1970s to mid- 1980s, a dozen-tome edition, Istoria tou Ellinikou Ethnos (History of the Greek Nation), arrived, piecemeal, at our Salt Lake City home; the advent of each book an occasion for schoolboy delight on my father’s part.

I read the typed invoices, and the correspondence back and forth, usually my father complaining about the delay of a long-awaited volume or the arbitrary change of price in dollars. This series, long in a place of honor in our home library in Serbia, was the foundation both of my knowledge of the Greek language and history. The correspondence and the books they paid for have played a singular role in my life and identity. 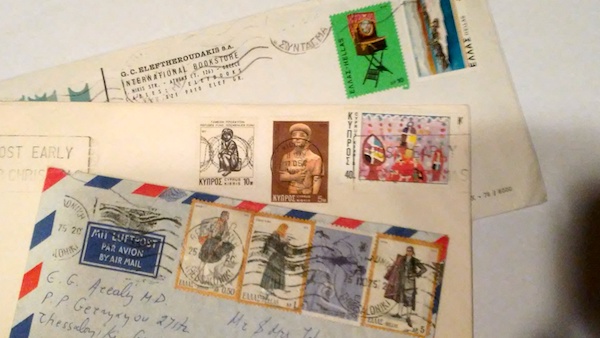 A collection of envelopes: with or without their letters, they say so much.

Other letters had beautiful stamps, often enough depicting Nature and (until 1974) neutral, non-nationalistic themes. The stamps were Greek, but also Turkish and English. Cypriot. The dates, all from the mid- to late 1970s, from the immediate aftermath of the Turks’ vivisection of this leaf shaped island, are likely from Cypriot friends and organizations thanking my father for his work on their behalf. Thumbing through the stamped, franked envelopes made me proud of my father’s past efforts, and reminded me that the old wound inflicted in 1974 has yet to be healed. More than any viral meme on Facebook, these silent envelopes are a call to action.

My initial review of the stamps, in haste during the move, turned into a longer one this morning, as I showed my family our history in stamps. They serve as elegant markers of a slower, more deliberate time, when correspondence “stamped an identity” on my father and me. This legacy, retrieved from cardboard and dust, now returns to a place of honor in our new home.